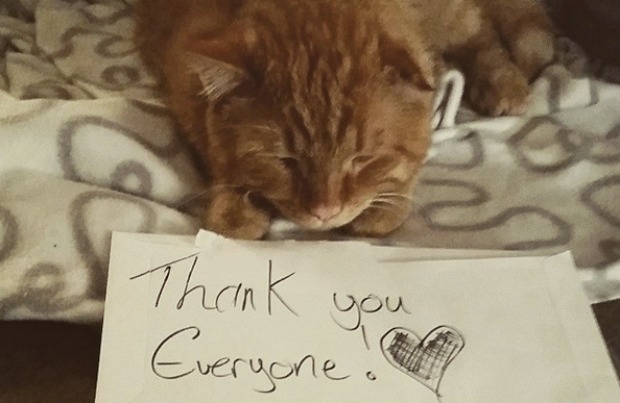 When Sandy Windover met BenBen the cat, he was a scared and shattered animal.

But Windover didn’t see an “ugly” or “unwanted” kitty, rather, as she tells Pet Central, “What drew us to him was that he was so broken and tiny and thrown away like no one wanted him and his eyes saw right into our souls.”

Windover, who works at an emergency veterinary clinic in British Columbia, first laid eyes on the cat when he was brought in by the BC SPCA.

The abandoned feline was suffering. He came in with an infected wound, puncture marks over his body, a “cauliflower” ear and spinal injuries in multiple locations.

While BenBen was treated for his injuries, Windover quickly fell in love with the cat.

After two weeks of care, Windover and her boyfriend gave BenBen a new, loving home—their own.

After posting photos of BenBen online, the cat became something of a viral sensation. He was deemed the saddest cat on the internet and cat lovers everywhere were thrilled to see that BenBen was adopted. Since then, Windover has created various social media pages for fans to follow BenBen throughout his recovery (including Facebook, Instagram and Twitter), as well as a GoFundMe page (delightfully titled BenBen FundFund for Animals in Need) to help other stray cats who need help like he once did.

Our FundFund is our way to give back and to save as many fur babies as we can with kind hearted people’s donation,” she says. “We want other special animals to get a chance at adoption, because not every pet at the shelter will find a home.”

BenBen no longer has an infection, but his ear and spine are permanently damaged and he will require lifelong pain meds to keep him comfortable. But despite his injuries, BenBen now has a chance to thrive and be the happy cat he always deserved to be.

“The best way to describe Ben is he is a goofball!” Windover says. “When we first brought him home he was full of purrs and cuddles and since being able to run and jump he’s gotten much more adventurous and wants to explore and smell everything. He plays all the time and takes cat-naps whenever he wants.”

Windover hopes that BenBen’s story will inspire other pet-friendly homes to open their doors and adopt animals who may be overlooked. “BenBen’s journey has been so remarkable and it has taught us patience and that everyone—big and small—deserves love and a second chance!”