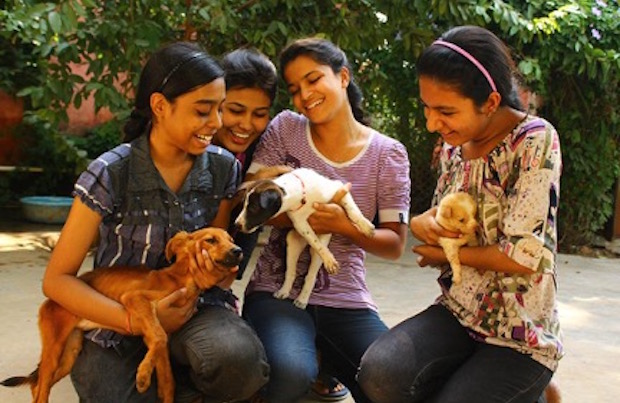 The streets of India are filled with an estimated 30 million stray dogs—and that’s just the tip of the iceberg. Countless donkeys, goats and cows also wander the country, injured, wild and abandoned, from town to town. Many locals simply turn a blind eye when a stray creature passes by, however, one organization is doing all it can to combat this issue.

Animal Aid Unlimited is devoted to curbing animal cruelty in India and rescuing as many neglected animals as it can. From its daily rehabilitation efforts to its many educational campaigns, the organization is responsible for making a massive difference in the lives of thousands of local animals.

We caught up with Animal Aid Unlimited founder, Erika Abrams, to discuss how she and her colleagues are working hard to better the lives of the street animals of India.

PawCulture: How did Animal Aid Unlimited come to fruition and why was India the place to launch it?

Erika Abrams: My family and I started to shift from America, where I was born, to India during the mid-90s. Our initial love of India included the fact that so many animals were roaming in the streets but when our transition here began, helping those animals was not even a consideration. Udaipur was a small city with an ancient past, beautiful lakes and abundant animal life—so we decided to set down roots in Udaipur.

The more time we spent in Udaipur, the more we made relationships—not only with people but with animals. It didn’t take long to discover acute veterinary needs and the fact that there were no facilities for street animals here, nothing for dogs, no place for an injured street dog to recover, let alone receive treatment.

In 2000 I realized that if we were going to help animals, we’d have to do it ourselves; there was no one else locally who had started a shelter. My husband Jim and I then rented a piece of property in the village where we lived and built a small operating theater and treatment room and about 30 kennels. We hired a newly-graduated vet, and a few guys to roam around the city and ask people if they’d seen injured or ill animals.

No one in the village had phones, so rescuing animals was done word-of-mouth in that time. We had our vet trained to do street dog sterilization surgery in Jaipur, where a long-established spay/neuter and rescue center called Help In Suffering was thriving. We received tremendous mentorship from Help In Suffering, both for veterinary medicine and for outfitting our shelter.

In 2003, we got our first land-line phone. We distributed thousands of leaflets at schools and community centers to encourage people to contact us if they saw an ill or injured animal. We got a grant to purchase a truck we used to rescue animals. Gradually, the calls started coming in.

PawCulture: What is the current mission of the organization?

Abrams: Animal Aid Unlimited raises awareness about local animals and about animal problems around the world. My role has been to continually try to understand and build the activities of Animal Aid Unlimited such that they are a meaningful puzzle piece in the animal rights movement across India and in the world.

For many people in this region of Rajasthan, commercial relationships with cows are the only relationships they’ve had with animals. They haven’t had the chance to see animals as equals or as sensitive beings that have been deprived of the chance to experience the world using their many faculties because they have been confined or killed.

Rescue has been a tremendous outlet for people’s compassion. Animal rescue means that people stop (and often dozens stop to witness or help with a rescue) and consider animals as worthy of being relieved of suffering.

PawCulture: What is your daily role within the foundation?

Abrams: Initially I was inventing the organization, in a sense. I was dreaming about it and putting pieces together to start it, with immense help from my husband and my daughter.

Over the years, my role has primarily been to help understand and articulate our goal of relieving suffering for animals, regardless of their species and regardless of the cause of their suffering—whether through commercial exploitation of animals in the meat and dairy industries, habitat encroachment, entertainment, experimentation, or just plain careless driving. We are animal protectors.

PawCulture: How many rescues are you doing on any given day?

Abrams: Today, Animal Aid receives and responds to about 30 rescue requests every day, rain or shine. We have rescued 70,000 animals since 2002.

PawCulture: Why are there so many animals on the streets in India?

Abrams: It is illegal to kill or displace dogs in India. Dogs are a scavenger species and their numbers correlate to the amount of food in their environment. Food waste and lack of organized and regular waste management in India means more dogs and other scavengers.

Cows are allowed to wander in some areas. Many families who only have a couple of cows think it’s cheaper if the cow can find food on the street. Sadly, she finds food, but it is stuck to plastic bags, which she also eats. The plastic is lodged in her stomach and when there’s too much, she dies of bloat.

PawCulture: What types of animals is the organization rescuing most often?

Abrams: The urban street is home to dogs, cows and donkeys, primarily. About 80 percent of our rescues are dogs and among them, about half are caused by car accidents. Dogs are not abandoned by humans but live in communities where they are often deliberately fed by families who do not bring the dogs into their homes. The dogs are often fed little bits by several families and also feed off of waste thrown onto the street.

Cows and donkeys also suffer from car accidents. Donkeys are injured during work, overloaded, their legs bound with ropes as a means of reducing their ability to trot off. We often rescue donkeys with legs damaged by tendons cut by their ropes or untreated saddling sores.

PawCulture: What is a typical day with Animal Aid like?

Abrams: Every day, our teams are on the streets of Udaipur responding to requests throughout the day from about 8 a.m. to about 10 p.m.

A typical day may include lifting a cow who has fallen into a drainage ditch, picking up a pigeon whose wing has been cut from a glass-string kite (popular here); we will pick up several dogs who have been hit by cars with broken legs, maybe with a spinal injury or a head injury; we will receive a cow who’s having problems in labor, whose owner can’t be found; a donkey who is found bleeding in the median of a busy road. Each rescue is a beautiful moment in which we can whisper in the animal’s ear: “You’re safe now. You’ll feel better soon.”

PawCulture: What is the Animal Aid Unlimited facility like?

Abrams: Animal Aid’s hospital and sanctuary are located on three acres in a rural area 20 minutes from the center of Udaipur. 500 animals are here each day. In the hospital and treatment area, these animals are ever-changing. We also have 300 animals that live in permanent sanctuary here—about 200 are dogs and 100 of them are large animals, donkeys, cows, and goats.

The land is subdivided so that large animals have their space separately from dogs. We have a trauma treatment area, a skin problem area, “Handicapped Heaven” for dogs with spinal injuries, “Love is Blind” for blind dogs (we have about 20 blind dogs), and so on.

PawCulture: What kind of impact is Animal Aid making on the local community?

Abrams: We have seen a steady rise in popular interest in helping animals. More Indians visit the hospital every year than in the previous year. More volunteers from around the world help. The increase in people’s participation in animal rescue is on a rising continuum and the animal protection movement in India, in Udaipur, and in the world, is growing.

Animals have rights, just as humans have rights. This is a rights revolution. It is a change in our understanding of that concept. It is our responsibility and privilege to protect and extend those rights.

PawCulture: What is the ultimate goal of Animal Aid Unlimited?

Abrams: The goal of Animal Aid Unlimited is to inspire people to protect all animals by rescuing and bringing relief to animals who are suffering right in people’s own neighborhoods. The rescue process brings us all into greater understanding of animals’ sensitivity, their intelligence, their grief, their capacity to suffer; it also enables us to celebrate animals who feel healthy, loved, stimulated and cherished.