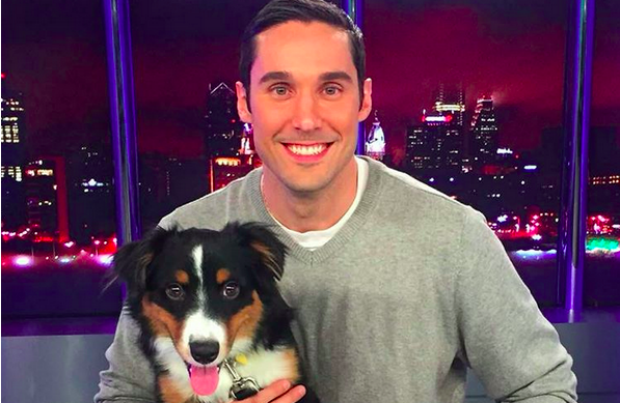 As any dog parent can attest, having that warm and furry best friend in your life opens your heart in ways you could never anticipate. They can also help mend your heart when it is broken in unimaginable ways.

Keith Jones, a devoted pet parent and news anchor for Philadelphia’s NBC10, knows this to be true.

In February, Jones endured a devastating tragedy when his girlfriend Cara McCollum, a fellow news anchor, died at the age of 24 from injuries suffered in a car accident.

Before her passing, McCollum and Jones had gotten a dog—a 10-week-old miniature Australian Shepherd named Charlie.

Charlie, now 14-months-old, has been an unparalleled support system and source of light for Jones during his time of grief. “He’s become everything to me,” Jones tells PawCulture.

“Dogs are amazing,” he continues. “They have this amazing sense and amazing ability to understand how you’re feeling before you even realize you’re feeling it.”

Jones says that Charlie would give attention and affection in times when he didn’t know he needed it the most. “He’ll jump right up in my lap or lick my face when I start to feel down. He’s been absolutely wonderful.”

Whether he’s joining his dad at work at the news station, or staying right by his feet at home (“He’s like my shadow”), Charlie’s sunny disposition has given him a whole new outlook. “He makes me laugh at life a lot more,” says Jones. “His whole world consists of, ‘When am I going to eat?’ and ‘How much can you play with me?'”

While Jones has always had family pets, he now considers himself a proud, self-proclaimed “puppy dad.”

In fact, that very “puppy dad” pride caught the attention of The National Dog Show, who named Charlie their official 2016 spokesdog after they saw Jones post about him on social media.

Jones—a tri-state native who has long been a fan of the Philly-based dog show—says, “It’s funny how it grew from Charlie just being my buddy, and now he’s famous and doesn’t even know it.”

Then again, being a Philly celeb runs in the family. When Jones isn’t working (he’s also an adjunct professor teaching broadcast journalism at his alma mater Villanova University) or spending time around Philly with his best bud Charlie (they enjoy walks along the Schuylkill River Trail), he also volunteers and works on the board of a non-profit called Main Line Deputy Dog.

It’s an organization that has meant so much to him as an animal lover and advocate, and continues to be a source of inspiration in his life now.

“My late girlfriend Cara taught me it’s not the years in my life that count, but the life in my years,” Jones says. “Dedicating my time to Main Line Deputy Dog—the perfect marriage of service dogs and people in need—is a no-brainer. The past four years volunteering on its board have been incredibly fulfilling to me.”