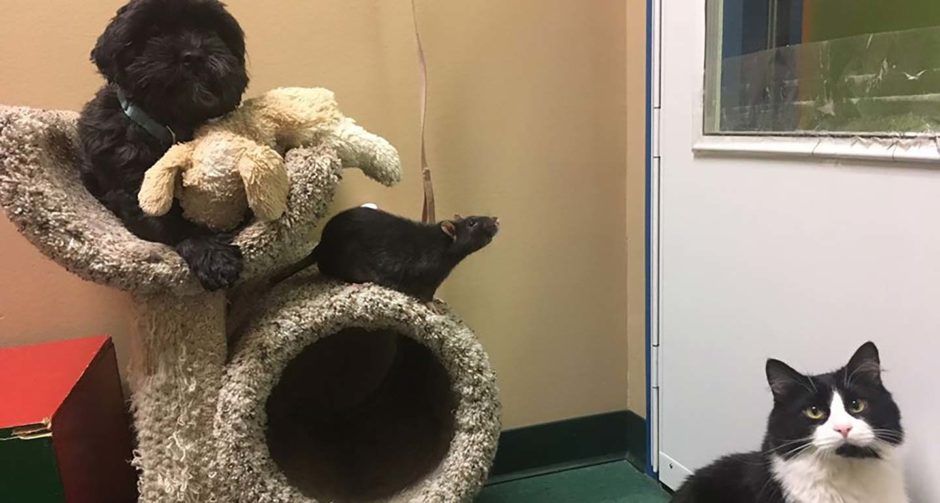 In March 2017, the Oshkosh Area Humane Society in Wisconsin received a strange delivery. A dog named Sasha, a cat named Jack and a rat named Tweeks were all surrendered together.

“Their family was moving and was unable to take the animals to their new home,” says Pat Rock, business administrator with the Oshkosh Area Humane Society (OAHS). Rock and his team were given very little information about the animals, except that they were bonded and it was the family’s hope that they would be adopted out together.

“We separated them initially and Jack was having a real problem,” says Park. “He hissed and growled at everyone that came near him. One day, we opened his cage door and he stepped out and fell right to the floor.”

The OAHS team had a vet come in to examine Jack and it was determined that the feline could not see very well. Then, one of the employees thought to bring Sasha in to see if that would help calm him down.

“Immediately the bond was evident. They rushed to each other and you could just see the happiness,” says Rock. Then they brought Tweeks in. “The dog and cat started playing immediately and the rat worked his way into the mix. We all decided they needed to be together and would be sure they were adopted together.”

The animals were moved into a room and put up for adoption together. One month later, they caught the eye of Kathy Berens and her 9-year-old daughter, Alexia. Berens visited the shelter looking for a cat but instead found the trio, who she affectionately refers to as the “Rat Pack.” It was love at first sight.

“The rat was climbing a cat tower and the little dog was curled up on the top of a low cat tower and then this big cross-eyed kitty was just staring at me through the window,” she says. “I couldn’t believe what I was seeing and couldn’t stop watching them.”

The next day, Berens was back in the shelter filling out the application to adopt the trio. For the first few weeks, she kept the Rat Pack in her bedroom, separate from her resident cat, Penny Lane.

Tweeks was housed in a large cage two feet from his new owner’s bed and was given plenty of time to be free roaming with his pals. Sasha and Jack got used to their new home, and eventually all three were slowly introduced to Penny Lane.

Life with the Rat Pack has been quite the adventure for Berens, who describes the trio’s daily antics as being filled with cuddles and lots of playful bouts of wrestling. After playing with Sasha, Tweeks would often spend time snuggling with Jack, while Sasha leads Jack around the home, serving as a seeing eye dog to the visually-impaired kitty.

And the animals bonded with their new owner as well. Sasha and Berens would go for walks out in the country and drives in the car, which Tweeks insisted on joining in on.

“Jack would stay home and play with Penny and we would go on long summer rides,” says Berens. “Windows open, Mr. Tweeks on my shoulder, and Sasha on my lap.”

Sadly, Tweeks died shortly after finding his forever home. Berens was told that the senior rat only had a limited time left to live, so she made the most of it with lots of love, attention and treats. The family buried Tweeks in the garden and decorated his grave with roses.

“That little rat stole my heart,” Berens says. “I couldn’t wait to get home from work so I could hold him and he would give millions of sweet little kisses. He calmed his Rat Pack friends and he always seemed like the leader. I still can’t believe he is gone, but even more, I can’t believe I was fortunate enough to have this surreal experience in the first place.”

Tweek’s memory lives on and Sasha, Penny, and Jack continue to thrive alongside Berens and her daughter. The trio have also been a huge source of inspiration for others. In her day job of running a green cleaning company, Berens cleans houses for many elderly and cancer patients.

“All of my people went along with me on this journey. They would get weekly updates and funny pictures. It was fun to share and it brightened the days of my clients,” Berens says. “At school, I would pick up Alexia and there would always be an excited group of little kids checking in how things were going.”

The family could not be happier in their decision to take home the three animals, each of whom Beren says have helped fill a void in her life.

“After I met the Rat Pack, we took off running and laughing and we don’t plan on stopping,” she says. “They taught me so many lessons. Don’t be quick to judge, as you might miss out on something that could heal your heart. Value friendship; it’s sacred. Always carry treats in your pocket, and share your meals and cook with love.”