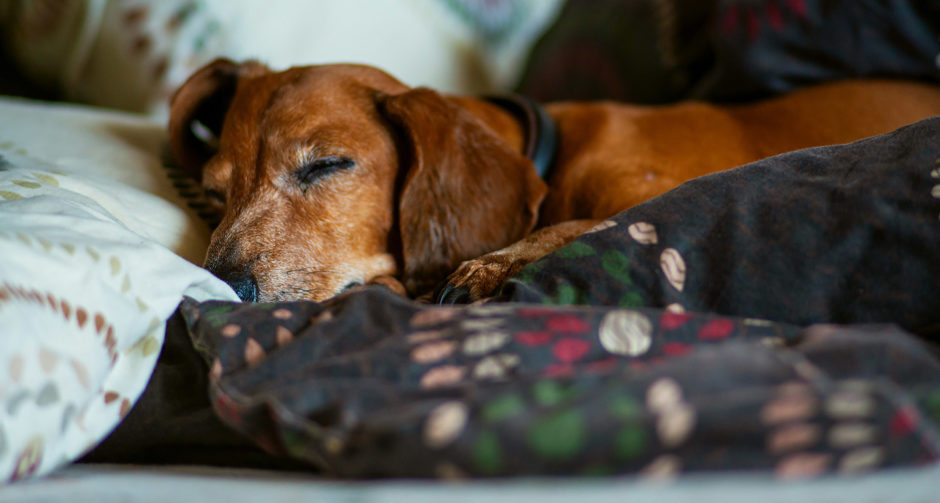 When Charles Protesto, an avid hiker who lives outside of Philadelphia, stopped into Main Line Animal Rescue, he planned to take home a young, active dog to join him on his jaunts in the woods. Then he spotted Barry, a senior dog and a black Labrador mix. Barry reminded Protesto of his previous dog, Honey, and the resemblance tugged at his heart.

Barry was 14 years old and suffered from hip dysplasia, but he kept staring at Protesto with his big brown eyes, begging for another look. Protesto couldn’t resist, so he took Barry out for a walk. He instantly fell in love with Barry, who, despite his hip condition, loved to walk.

The two bonded quickly and spent many hours hiking together on 200-plus acres of old, wooded farmland.

“As soon as I said, ‘Let’s go down the farm!’ his tail would start going and he’d be at the door running around. He loved it,” Protesto says. After two years, Barry passed away, but his love of hiking inspired Protesto to adopt Wylie, another senior dog.

Thanks to Protesto’s open-mindedness, Honey, Barry and Wylie—all senior pets—found a loving home in their twilight years. Unfortunately, millions of other animals aren’t as lucky.

According to the American Society for the Prevention of Cruelty to Animals, approximately 1.5 million shelter animals are euthanized each year, and sadly, senior dogs and cats often account for the highest-risk population in shelters.

Pets are considered senior around the age of 7, but age itself is not a disease, says Elizabeth Berliner, director of shelter medicine at Cornell University’s College of Veterinary Medicine. While older animals might have conditions to treat, they also might be perfectly healthy.

“Senior dogs are individuals, just like [other] dogs,” says Lisa Lunghofer, executive director of The Grey Muzzle Organization. “There’s a lot of variability in terms of what type of home a senior dog might need based on his personal story and situation.”

She points to her own two 15-year-old dogs as examples, one is fighting bladder cancer while the other is perfectly fine. Depending on their needs, there are some accommodations a senior pet may require, Lunghofer says.

If an animal is dealing with a specific illness, like cancer, they might need regular medications or a special diet. If they struggle with movement, they might need a dog ramp to get up steps or an elevated dog bowl to reach their water and food, Lunghofer says. If the pet has a cognitive disorder, like dementia, they might get confused about which side the door opens from. In this case, an adopter would need to create an environment (such as putting up gates) to keep the animal safe, she adds.

Regardless of health issues, what all older animals need is a loving home. When senior pets must leave a home they’ve known for years and go to a crowded, chaotic shelter, it can be scary and confusing.

“It’s stressful for them to go to a shelter,” Berliner says. “Getting them into a new, loving home … you can see the relief. They’re so appreciative and very quick to adjust to their new family.”

Finding the right pet all comes down to matchmaking, and for many people, senior dogs and cats often make an ideal choice, says Laura Coffey, senior dog expert and author of "My Old Dog: Rescued Pets with Remarkable Second Acts."

For her book, Coffey and photographer Lori Fusaro took a road trip to photograph and write about senior pet adopters all over the country (including George Clooney and his senior Cocker Spaniel, Einstein). After talking with dozens of adopters about their senior pooches, Coffey noticed a pattern emerge. Not one person said they regretted their decision, citing the many benefits of adopting an older pet.

With no hassles of accidents, behavior training or dealing with a teething puppy, senior pets “jump ahead to the golden age,” Coffey says. “There are no surprises. What you see is what you get in terms of how big they’re going to get, their personality and their health issues.”

If you’re considering adopting a senior pet, Coffey suggests speaking with the people who are most familiar with the animals. If a certain shelter volunteer cares for the same ten dogs every day, find out who they gravitate toward on their walks, if they’re skittish, or if they warm up quickly to energetic young kids.

You can also reach out to your local animal shelter for an up-close-and-personal look at potential new-but-older furry family members. In addition, many shelters feature a “seniors for seniors” program, matching senior people with senior animals. The programs often waive or reduce adoption fees and might provide food, supplies and ongoing veterinary care to adopters.