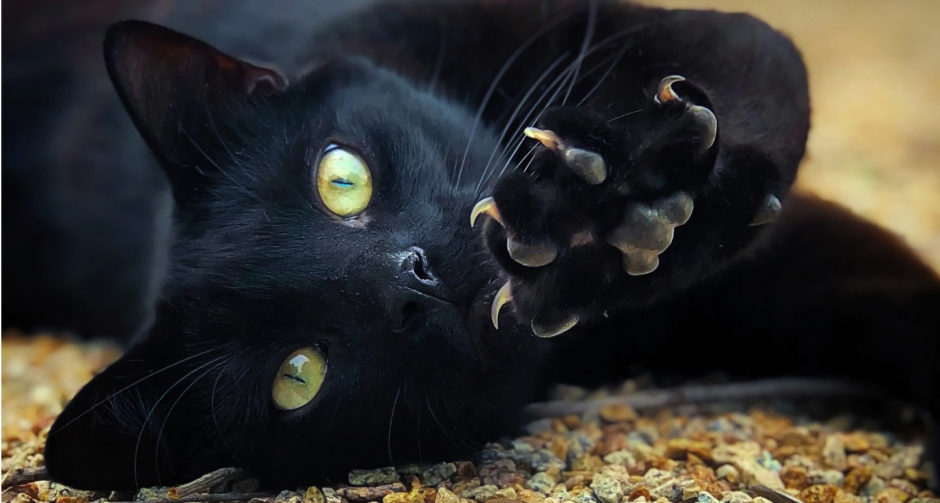 For black cats and black dogs, Halloween can be a trying time. The cats, with their arched backs and upright tails, and the dogs, with their jagged teeth and gleaming eyes, are shown in children’s books, scary movies, and haunted houses. They’re meant to instill fear and leave us with goosebumps.

So why were these two pets deemed scary holiday icons, and not, say, tabby cats and white poodles? The reason has to do with our culture’s long-lasting superstitions and myths about black cats and black dogs at Halloween.

“Cats are a pervasive motif in folklore,” says Lynne McNeill, Ph.D., a folklorist at Utah State University. “Their roles in stories, legends and beliefs mirror the roles of other supernatural creatures such as fairies, demons, ghosts, and monsters.”

And black-coated cats are especially omnipresent. If one crosses your path in the United States, you’re supposed to reverse the bad luck by tipping your hat and saying, “Good evening, Mr. Black Cat,” explains McNeill. This display of respect is common in beliefs about the devil, too. But not every country views black cats in this way. For instance, black cats are considered good luck and white cats are deemed bad luck in the United Kingdom.

Historically, cats are connected to sorcery, too. “Women and cats were often burned together for crimes of witchcraft,” says McNeill. Sometimes they were seen as an incarnation of the devil. In 1495, one woman claimed she learned her spells from “Lucifel,” who appeared in the form of a black cat. Most often, though, the cat was either the witch’s familiar or the witch herself transformed.

“This belief that black cats are supernatural and bad luck are culturally reinforced,” says McNeill. “When we think of things that seem creepy and eerie on Halloween, we think of dark things. That’s why witches wear black or dark purple and they have black cats. Kids grow up seeing illustrations and costumes with these things, and suddenly the ideas are passed on from generation to generation. It reflects our culture’s ideologies and helps create them, too.”

Black dogs get a bad rap, too, she says. In Greek mythology, Cerberus is a giant multi-headed dog or “hellhound” with a serpent’s tail that guards the gates of Hell.

In the U.K. and Northern Ireland, Shuck is a ghostly demonic dog that has large red eyes, jagged teeth, and shaggy black fur. According to folklore, Shuck is known to prowl the coastlines, graveyards, and forests. If he finds you, he can bring bad luck or even be an omen of death.

And if you’ve ever read “Harry Potter,” you’ve heard of the Grim, a spectral black dog that haunts churchyards and is known to bring the demise of the person who comes across him.

“Think about our most frightening experiences: They usually happen at night,” says McNeill. “All animals look black at night, so people tend to equate black animals with terror and fear.”

Unfortunately, our mythical views of black cats and dogs may seep into our real-life views of them as pets. Black Dog Syndrome is the name shelter workers have given to the tendency of ebony-furred pups to stay in kennels longer than their lighter-furred counterparts. In fact, black dogs get euthanized at higher rates.

Black cats don’t fare any better. Lori Kogan, Ph.D., an associate professor at Colorado State University and a licensed psychologist who studies human-animal interactions, examined color-coded adoption data of about 15,000 cats. According to her research, it takes three more days for black cats to be adopted compared to cats with black as only a primary coat color (like ‘tuxedo’ cats), and it takes four to six more days for all-black cats to be adopted when compared to cats of other colors. The trend was consistent across all ages, from kittens to adults.

And that’s a problem because a cat’s chances of contracting an upper-respiratory infection increases every day he is in a shelter—and that can be a death sentence for a cat, says Kogan. After just two days in a shelter, a cat’s chances of getting an upper respiratory infection is five percent. After a week, that chance increases to 21 percent. And after two weeks, it jumps up to 80 percent.

Even if you don’t believe in the myths and folklores, you may still be less likely to adopt a black animal. “Their coloring makes it difficult to get good photos and videos,” says Lisa Treacy, social media coordinator for Black Cat Rescue, a foster program in the greater Boston area. “It’s harder to see their expressions and their features.”

In fact, people find images of black dogs scarier than photos of yellow or brown dogs, a 2013 study from Penn State University psychologists found. The participants rated the black animals less friendly and less adoptable, which is a problem in a world where adoption searches usually begin online.

“The color of an animal’s fur has nothing to do with its character,” says Treacy. “They get a bad reputation because of the extra melanin in their coat.”

So if you come across a black cat or black dog this Halloween, don’t go running in the opposite direction. Chances are, they’re not out to cast a spell on you or bring you bad luck—they may just be looking for a little love.