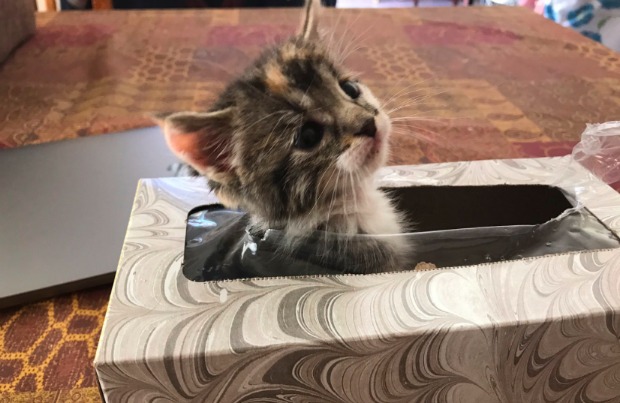 It’s every pet parent’s worst nightmare: your beloved four-legged best friend appears to be missing. You’ve searched high and low, but they don’t seem to be anywhere. You’re certain you didn’t let them out of the house, so where could they be?!

That was exactly what happened to social media star Britney Doritz when she couldn’t find her month-old kitten named Chanel.

Thankfully, after a frenzied search which she documented on Twitter, Doritz found Chanel hiding in a most unexpected place.

“We just spent a hour looking for her,” Doritz wrote, accompanied by the hilariously adorable photos of her kitten hiding out in … a tissue box!

The post has since gone viral, racking hundreds of thousands of retweets, thanks to the oh-so-cute pictures (her sweet little kitten expression seems to be, ‘Oh, hello, here I am!’) and the very happy ending.

Doritz admits that she “almost cried of happiness” when she finally discovered where she had been hiding.

So, next time your curious kitty is hiding, don’t forget to look in the place you’d least expect. They may just be hanging out in there.

Aly Semigran is a lifestyle writer for the world and roommate of Ruby, the cutest dog in the world.