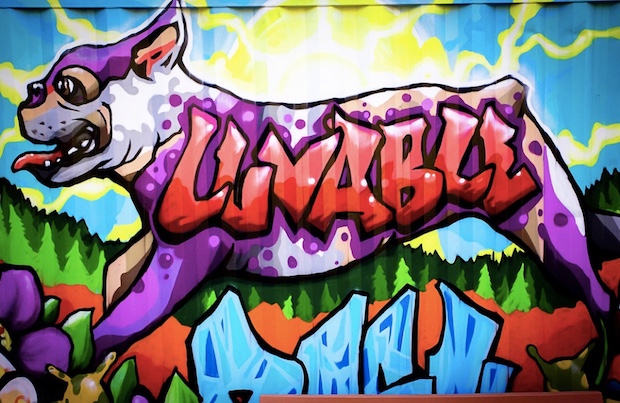 On a cold Oregon morning, Liesl Wilhardt navigates two Pit Bulls at a time on the trails of her 55-acres of fir forest. Even on the morning following an ice storm, Wilhardt says it’s important for the dogs housed in her rescue to get exercise.

“Hiking and being outside is a big part of their life here,” says Wilhardt. “Many of these dogs have been through terrible abuse and exercising in nature helps them stay balanced.”

Regular exercise in the woods isn’t the only thing unique thing about Luvable Dog Rescue, located in the hills outside of Eugene. Many of the dogs live in one of seven cottages on the property instead of a traditional kennel shelter environment.

Wilhardt, the executive director of Luvable, founded the rescue 18 years ago. She initially built a traditional shelter with kennels, but as the rescue (which began as a Pit Bull rescue exclusively) began accepting small dogs, she recognized the need for more space.

Although some small dogs come from local kill shelters, many arrive 15 to 20 at a time from high-kill shelters in southern California where the euthanasia rate is much higher. They are divided into two groups and placed in the two quarantine cottages for two weeks. If they need medical attention, they are housed in the medical trailer. Once determined to be healthy and groomed, they live in the cottages until they are adopted.

Small dogs that cannot get along well with other dogs are placed in dog kennels, while others are rotated into the kennel building so that the larger dogs are allowed to spend time in the cottages as well. The rescue can have as many as 30 small dogs and 10 pit-mixes at any given time. “We never take any more than we can house safely,” says Wilhardt.

Wilhardt and a shelter manager live on the property full time, and six additional full-time staff members and a plethora of volunteers help ensure the dogs get plenty of outdoor time and care. Staff entering the quarantine cottages are required to don scrubs and gloves to help prevent cross-contamination of communicable diseases. “We’ve never had an outbreak of anything,” Wilhardt adds.

Luvable operates through donations and grants. Last year, the rescue was able to take in more pregnant mommas and dogs who had just given birth and their puppies.

“We were seeing a lot of dogs getting dumped into the shelters pregnant because people failed to spay their dog,” Wilhardt says. “A lot of them were being put down because no one wanted to adopt them.”

Christine Lagos is a puppy-care technician and has been helping care for dogs at the shelter for over two years. When the rescue started helping pregnant dogs, she began caring for the dogs and their litters and has helped raise 30 of the 33 litters born at Luvable.

“Every day in shelters innocent moms and puppies lose their lives because their owners failed to spay them,” Lagos says. “Each life is equally important and deserves a fighting chance. Seeing their happy endings makes it worth every second. I love each and every one of them.”

Wilhardt has big plans for the future of Luvable.

“We had a benefactor purchase another piece of property and we are working with the county and land planners to build another village to accommodate more dogs at a second location,” she says.

The rescue also plans on working with the UC Davis School of Veterinary Medicine for consulting on the shelter design and to incorporate more shelter best practices. Wilhardt plans on building more cottages and having a separate maternity unit at the second location (momma dogs and their litters are currently housed in the loft of the large shelter building).

The most important thing, Wilhardt says, is continuing to rescue and shelter dogs the right way.

“All of our dogs get a full veterinary visit, including full dental, spay and neutering,” Wilhardt says. “It’s expensive, but we’re committed to making sure our dogs have a great life when they’re with us and when they’re adopted.”

As for Wilhardt, she says the 16 miles she walks every day with the dogs helps keep her healthy and fit. “I hope someday there isn’t such a great need for us, but I plan on staying healthy so I can do this for a long time to come.”

Kerri Fivecoat-Campbell is a freelance journalist and author who lives in a tiny house with her five dogs and husband.