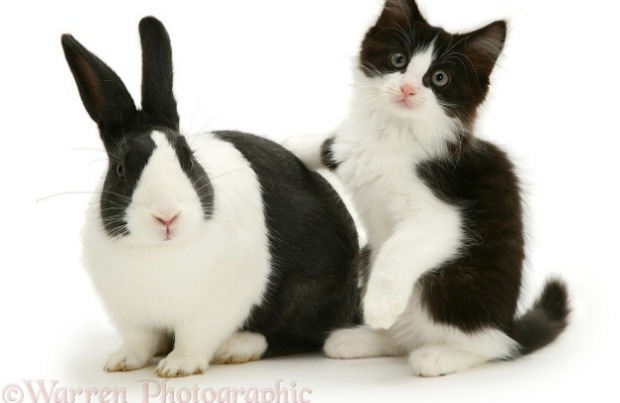 Do not adjust your computer screen: these adorable animals, though they look completely alike, are actually different species entirely.

These cute lookalikes were the inspiration for UK-based animal photographer Mark Taylor’s series, “Pet Brothers From Other Mothers.”

The idea for the photos, which have gone viral since their release on Warren Photographic, began when Taylor’s mother noticed that a friend’s kitten and rabbit looked exactly alike.

Since then, Taylor says he has taken “literally hundreds” of pictures of lookalike animal pairs over the years.

Taylor says he loves photographing animals because of their unpredictable nature in front of the lens, and added that he definitely had some challenges when it came to shooting the series.

From finicky terriers to pooping chickens to humping bunnies, he’s truly seen it all.

“It’s nearly always a challenge because of the difficulty in getting the animals to look relaxed and at the same time be focused on each other or the camera,” Taylor says. “They usually have other agendas.”

Taylor says that his subjects tend to get along better when they have been raised with other animals or have been introduced to other species.

While the shoots can be chaotic, Taylor says that there are animal pairings that have surprised him along the way. He cites his Bulldog and guinea pig duo (pictured below) as one as his favorites because “there was a real tenderness from the Bulldog right from the start.”

Thanks to the newfound success of “Pet Brothers From Other Mothers,” Taylor says he may continue to photograph animal pairings, but nothing is set in stone just yet.

In the meantime, fans can enjoy his current selection of kitties and puppies and fawns and hamsters and ducklings and rats and badgers and birds (oh my!).