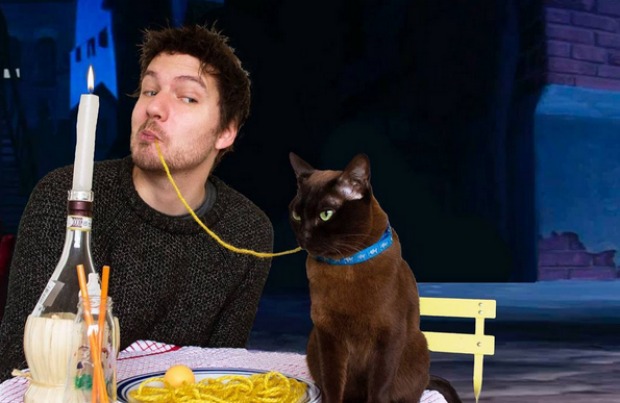 What are classic movies like Lady and the Tramp, The Shining, and E.T. missing?

Film scholars and buffs may tell you nothing at all, that they are perfect as is. But a new Instagram account has proven that these movies, however great they may be, are missing one key thing: an awesome cat in the place of the main characters.

The incredible @moviecats features kitties Tara and Willow and their very clever owners David and Sarah—who hail from Nottinghamsire in England—recreating iconic scenes from beloved movies.

“We started doing it as a question for the film & TV round in our pub quiz, and it was so much fun we decided to keep doing it,” David and Sarah tell PawCulture.

The delightful Instagram account—which has quickly racked up tens of thousands of followers in a matter of a few weeks— even has a behind-the-scenes page, which shows how Tara and Willow make movie magic.

David and Sarah tell us that the shoots can take around two hours, and that the cats swap turns with their starring roles.

“Sometimes we’ll try a shoot with both cats, if one cat just isn’t interested then we see if the other one is more up for it,” the pet parents explain. “We started with Willow for the Ghost shoot for example, but she wasn’t interested in being picked up, she just kept running over to me for treats! Tara was a lot more relaxed about it.”

No matter which cat is up for the task, whether it’s striking an American Beautypose or busting a gut a la Alien, David and Sarah joke, “It’s a fairly unique weekend activity, which is fun.”

“It’s also really nice to just spend some time doing something extremely silly together – we have a lot of fun with it, deciding what ‘props’ we need, giving the cats lots of fuss and treats, and laughing at the photos we take together. It’s cool that people on the Internet seem to like it, too!” That’s an understatement.