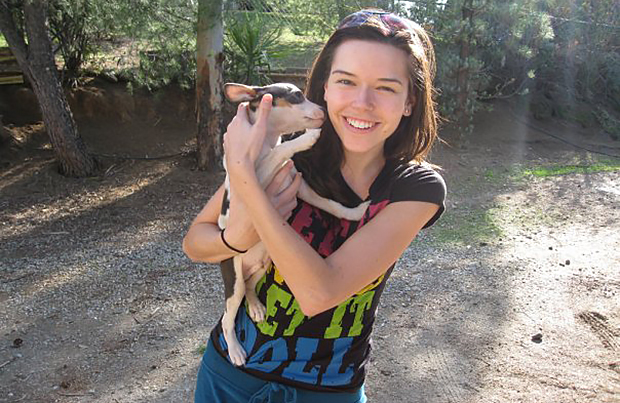 “Do you want to bathe the dog or clean the crate?” My husband, Greg, asked while turning the key to open our front door. “I’ll put him right in the tub,” I cooed before giving him a kiss and springing to action.

We walked into a very familiar scene. Rocky, our 4-month-old Rat Terrier, had pooped in his crate and of course stepped in it and … well you get the picture. This was a common scenario in our house for many months. We were on our last nerves.

Growing up, there was nothing that I wanted more than a dog. My parents both worked and didn’t think it was fair to leave one by itself all day. They had been raised with dogs of their own and were quick to inform me of how much work they were.

So instead of a dog, we had guinea pigs, a bird, fish, frogs, hamsters, and hermit crabs. When I finally got Rocky, my first puppy, I completely understood all of their concerns. Boy do I owe my mom hundreds of apologies for all those guilt trips.

Rocky was the runt of his litter. He was the unwanted little pup in a tribe of championship pedigree brothers and sisters. And when we crossed paths, I was instantly in love. I’ll never forget how excited I was on the drive home from picking him up. He fell asleep in my lap and snored the entire hour-and-a-half commute.

Greg and I popped into Home Depot on the way back. Rocky sat in the grocery cart and enthusiastically waved his little nub of a tail and I felt so incredibly lucky. I finally had my own dog. And he was so perfect. When we got home, Rocky passed out. The stimulation from the day had tired him thoroughly and he slept most of the next afternoon. “He’s such a great puppy,” I thought to myself … but then, he wasn’t.

Greg and I took great detail in getting Rocky used to his crate. We gave him treats when he went inside, played with him before closing the door, did everything that all the Puppy Raising 101 books said. But that second night, when we crated him for the evening, he started crying bloody murder. “Maybe he has to go to the bathroom,” said Greg, who promptly got up and took him to his spot. Rocky didn’t have to pee, he simply wanted to play.

Upon being sprung from his dog crate, he trotted over to Greg and began biting on his pant leg. Then he grabbed his ball and ran all over the house. My patient husband put Rocky back inside, shut the door, and went back up to bed. The wailing commenced and then didn’t stop. Suffice it to say, we got barely any sleep that night. Or the night after, or for many nights after that.

In my sleep-deprived stupor, I got pulled over by a cop for swerving one night. He shined a light into my window and asked if I had been drinking, to which I replied, “No officer. I have a new puppy and I’m so tired.” He flashed a skeptical grin but retreated when I showed him the puppy behavioral book and dog-calming treats that I had just purchased as proof.

Rocky made it his mission to let us know he was stressed whenever we left him. We’d leave for work or run an errand and return home to a pee and poop-filled crate. I consulted expert after expert whose first comment was always, “dogs don’t usually go where they sleep,” followed by the question of, “Is his crate too big?” It wasn’t. We had used the divider to size it to precisely fit Rocky but to not be too large as to allow him room to excrete in the corner. He did it anyway. And laid on top of it. And he also barked when we left him, for hours. My neighbors were quick to let us know how incessant it really was. Finally, we consulted our vet.

We quickly learned that our dog had extreme separation anxiety. “It’s probably because he was coddled for being the runt of the litter,” the vet said. “He’s going to be a great dog but he’s just going to take a little extra work.”

Suddenly, this sweet little puppy had become much more responsibility than my parents had even exaggerated a dog to be.

A year into our relationship, Greg and I had been on cloud nine. We moved into a fancy new townhouse, spent late nights throwing darts at the neighborhood pub and frequently took off for spontaneous weekend trips. We had decided that kids were too much responsibility for our busy bee lifestyle but thought we could at least tackle a dog. Rocky, however, was like raising 10 dogs in one.

“You kids weren’t even this hard!” said my mom over the phone after hearing about Rocky’s latest escapades. As we were heading out one night with some friends, Rocky had promptly marched into his crate and pooped inside of it, right in front of us.

Once we abandoned the crate and began to train him to use Pet doors, he started pooping outside on the grass then carrying it back into the house and depositing it in the middle of our living room to protest being left home alone. It was problem after problem, and some of the worst separation anxiety that our veterinarian had ever seen, but Greg and I rallied together, determined to get through it. Giving Rocky back was not an option. He was a member of our family now and we were determined to calm his nerves and keep ours somewhat intact in the process.

We hired trainers, we read books, we bought all sorts of products – everything from dog treats infused with lavender oil to calming collars and stuffable Kongs. We took turns getting up with him at night, coaxing him into his crate, leaving the house for five minutes at a time and once he got used to that, upping it to 10 and then 20. And then one day, it all stopped. We left our apartment and Rocky didn’t bark or cry. We went to bed and he willingly conked out on his bed within minutes. And he no longer used his crate as a toilet. It was miraculous.

Four years later, proud of how well we had tamed what we once affectionately referred to as our “demon dog,” Greg and I welcomed a 4-month-old Doberman puppy into our clan.

Lyla was a breeze to train, and Rocky played a big part in that. He showed her how to access the dog run on the side of the house and where to pee. He taught her to chase squirrels around the backyard and willingly shared his bones and bed. And Lyla never had a single accident in her crate.

Rocky was difficult but worth it. He’s added so much joy to our house and accessed a maternal part of me that I didn’t know existed. After cheersing to our amazing dog parenting resilience one night, Greg and I realized that we could in fact, probably handle a baby or two.

“At least they don’t come out of the gate nipping at your pant legs,” I said. “And their poop is pretty much contained to a diaper,” Greg cheerfully added.

We made it through Rocky’s terrible two’s, and he’s since been a phenomenal dog. Who knows, however, what will happen when we bring a newborn home and Rocky’s hit with the realization that he’s no longer the center of our universe.