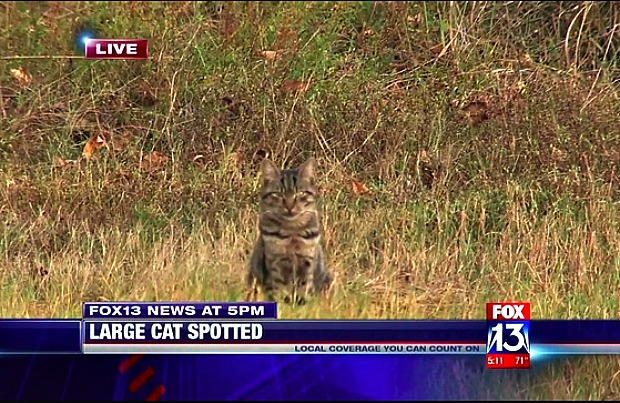 When a cougar was spotted in a field by a resident in Hernando, Mississippi, local FOX13 news anchor Scott Madaus went to go see if he could get a look at the large cat himself to share with viewers. What he got, instead, was a hilarious and unforgettable news blooper.

During a live report, Madaus pointed to the area where the cougar had been seen and, in what can only be described as being at the right place at the right time, a domestic cat sat and stared right at the camera.

“There’s been spottings of a cougar,” Madaus says to the camera, turning, and immediately realizing he’s looking at a regular cat, he tells viewers, “And that’s not it.”

Madaus does his best to try and salvage the situation (the unflinching cat, meanwhile, seems unfazed by his live TV debut), but the short clip quickly became an internet sensation.

The gut-busting video garnered the attention of celebrities like Questlove, who shared it with his 3.7 million followers.

Madaus is being a good sport about the whole thing, and shared the clip on his own Twitter page for those who may have missed it (or want to watch it again for the 100th time).

The anchor has even been fielding questions about the moment, including this behind-the-scenes gem he shared with someone from NBC Nightly News:

Once again, cats make everything better.

Aly Semigran is a lifestyle writer for the world and roommate of Ruby, the cutest dog in the world.