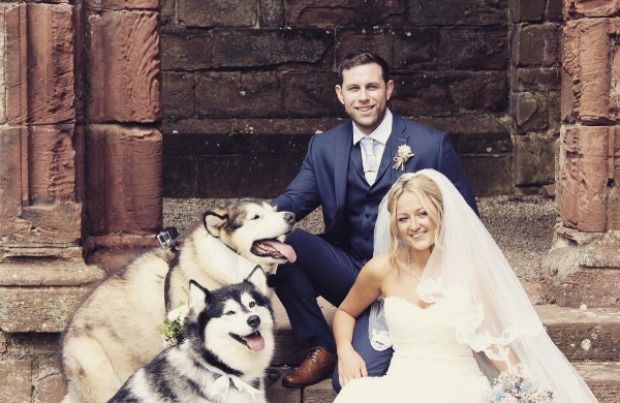 Pet parents including their beloved animals in their big day has become nothing short of a phenomenon in the wedding industry. From photo shoots with curious cats to ring bearer dogs, a guest list simply isn’t complete without our four-legged friends.

But one couple took the pets-at-weddings trend to the next step by having their two Alaskan Malamutes, Phil and Niko, serve as their maid of honor and best man, respectively.

Emma Leigh-Matthews and Shane Matthews wed on Sunday, July 30 at the Abbey House Hotel Barrow in Furness, England, with two-thirds of their furry family by their side. (The clan’s beloved kitty Milo had to sit the festivities out due to hotel restrictions, but he celebrated in spirit.)

Leigh-Matthews says she came up with the idea to have 4-year-old Phil and 3-year-old Niko in such pivotal roles for their nuptials because she always has her pets by her side (she describes herself as “dog mad”) and couldn’t imagine not having them there.

“You wouldn’t get married without your children, [and] my dogs are my children,” she says.

In addition to Phil’s dapper bowtie, he sported a GoPro to catch all the action from his point of view, providing a unique perspective from the walk down the aisle to the couple’s first dance. Niko, on the other paw, wore a gorgeous floral arrangement.

“Who needs a photo booth when you have two Insta-famous doggies to take selfies with?” Leigh-Matthews says.

For soon-to-be-married pet parents who want to take a cue from them and have their dogs (or cats, if possible) attend, Leigh-Matthews has some sound advice, especially if you’re using a GoPro.

“Inform your wedding guests ahead of time about the GoPro attached to your dog so they can dress appropriately,” she says. “Phil filmed a lot of up-the-skirt action, unintentionally.”

While they couldn’t fulfill all of the duties of best man and maid of honor (in lieu of speeches, Niko and Phil gave celebratory howls for their parents), Leigh-Matthews says the dogs were on their best behavior during the special day.

“Their faces lit up every time they saw us,” she says. “They knew it was a special day.”

In fact, Niko and Phil are such an important part of their owners’ lives that they’ll be joining their parents for their upcoming honeymoon.

“Next year we’re taking a whole month, renting a camper and seeing how many countries in Europe we can visit,” Leigh-Matthews says.