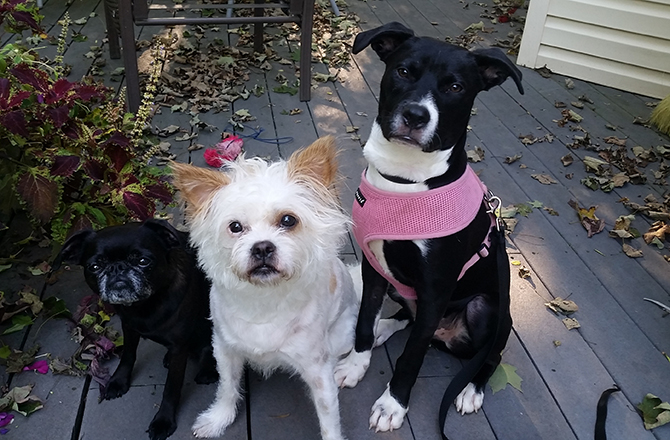 Fostering a dog or cat is one of the most generous and life-changing gifts you can give a pet in need. It not only transforms the animal’s life, but you’ll find that you emerge from the experience changed for the better as well.

Helping my buddies Freddy the Pit Bull and Domino the mixed breed dog find their forever homes taught me some important lessons, and my background as a dog trainer clued me in to some of the subtle slipups that can bump up the tension as a temporary lodger gets acclimated to your canine crew.

My resident dogs Millie and Olive can be exacting housemates (translation: they don’t like it when newbies push boundaries or shift patterns they’ve established) so I always had to be two steps ahead of the three dogs to ensure a peaceable kingdom.

Here are the most common mistakes foster pet parents make and how to prevent them:

It’s probably obvious that your resident dogs need to take their meals away from your foster dog to prevent scuffles, but remember that meal time is more than just when the dog bowls hit the floor.

The entire process, from the moment you ring the dinner bell until the time they eat that last bite, can be a chance to get feisty about food. My dogs take meal prep very seriously, and each have their preferred rituals as I get their food ready.

We had a near miss one evening when our foster Domino moved from a “sit” to a “cut in front of Olive,” who likes to stand close to me while she waits for dinner. She got ready to let him know that it was not acceptable behavior, but I was able to interrupt the scuffle before it escalated. From that point on, I opted to leash Domino to a heavy piece of furniture nearby so that we could proceed with our usual process uninterrupted.

Remember, too, that even an empty bowl might be a trigger for guarding behavior. To be safe, pick up all bowls after mealtimes.

In our house we have a handful of dog toys that are considered top rate. The rest are misfit toys that live in a basket on the floor, completely ignored. One might think they’d remain boring when our fosters checked in, but the moment Domino started paying attention to the goodies in the basket, both Millie and Olive decided that were suddenly worthy of notice again.

This wasn’t a problem for the three of them since none of them guarded toys, but if your dog is at all possessive of his stuffed babies, you should put all of them up, including the boring old stuff, while your foster is bunking with you.

It’s fun to envision what a foster’s forever home is going to be like. Will he have a canine or feline sibling? Will his new parents be as active with him as you are? Will they allow him on the furniture? Domino came to us after spending two weeks with a short-term foster who gave him full couch and bed privileges, which made life challenging for us when he arrived.

Both Millie and Olive have all-access passes to our furniture, and they didn’t appreciate Domino assuming that he could join them. To prevent simmering tensions, we always made sure that Domino had a cozy spot close to wherever we were resting that wasn’t right on top of us.

This is an easily avoidable problem, so do your foster’s future family a favor and let them decide if their new dog can come up on the furniture, rather than getting him hooked on the habit while staying with you.

If you look at any photo of Domino from his time with us, you’ll notice one consistent aspect: he’s wearing a dog leash in every single one of them, outside the house or in.

Our home doesn’t lend itself to baby-gating and Domino wasn’t acclimated to a dog crate, so whenever I needed to step away from him, I used a leash to tether him to something sturdy, like a doorknob or heavy table. This kept him from following me to no-fly zones, prevented unchaperoned interactions with Millie and Olive, and encouraged him to try to chill with a busy toy while I was out of sight.

I also used the tether every morning when I needed a few minutes to drink my coffee in peace—without the tether, Domino tried to entice my mellow morning dogs to play with him. Tethering him with a treat-stuffed busy toy helped him learn to settle next to me at the table.

I also used the dragline in the yard (even though we have a fence, I wasn’t sure if Domino could clear it). Any time we went outside for a potty break, I put him on a 15-foot line so that if he decided to go bunny hunting, I could grab the leash before he got too far. The leash also helped when Domino tried to play rough with Millie and Olive and I could quickly step on it when he got pushy.

Sharing Your Attention (and Treats!) Unevenly

It’s hard not to shower a foster dog with love and attention. This is understandable and no doubt appreciated by your foster, but your resident dogs might not feel the same way about your generosity. We don’t know how our dogs process feelings that we would chalk up to jealousy, but there’s no question that if you’re spending extra time with the new guy, your resident pups are bound to feel left out.

Domino liked to play hard and rough, which didn’t go over well with my dogs, so I wound up taking him outside alone a few times a day to burn some play energy. I know Millie was unhappy with the play discrepancy (she never says no to a game of fetch or tug) so I made sure to sneak away for private play time with her as often as possible.

Domino also wasn’t fully housetrained, which meant that I had to accompany him to the yard many more times a day than I went with Millie and Olive. I rewarded him every time he pottied outside, and my dogs started picking up on the fact that the new guy was getting more goodies than they were. To combat any jealousy issues, I went back to rewarding both of my dogs for pottying outside as well. It can’t hurt to reinforce an old lesson, and it helped them feel like they were a part of the program.