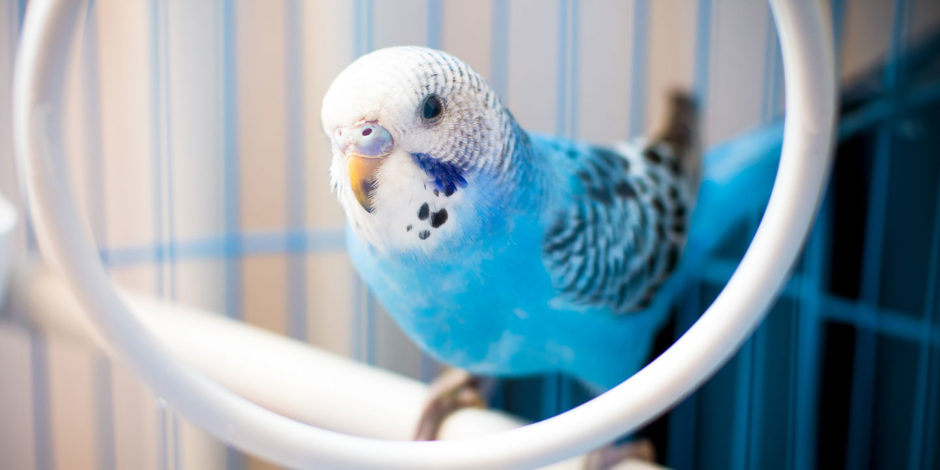 If you were to visit a pet store, you could find a multitude of over-the-counter treatments labeled for bird mites. There are sprays, metal round canisters labeled “Bird Protectors,” powders and even liquid for the bird’s drinking water.

But before you get creeped out thinking about your pet bird and mites, relax. Cases of mite infestation are less common than you might expect after seeing all the non-prescription treatments that are sold to pet parents.

If you suspect your pet bird has mites, contact your avian veterinarian, and learn what mites are, the signs of infestation and treatment options.

Mites are a type of parasite—very small (in some cases, microscopic) eight-legged arthropods. They are arachnids, thus related to spiders and ticks. They ingest blood, skin and/or feather material from the bird.

Scaly face (also known as scaly leg) mites typically affect budgerigars and canaries, although other pet birds can get infested. Chickens even have their own version of this type of mite.

Symptoms of scaly face mites include a gradually developing, crusty thickening of the skin on the cere (the fleshy mound above the beak where the nostrils are) and on and surrounding the beak. This crustiness also can be around the vent (the common orifice from which the digestive and urinary systems eject), and on the legs and feet.

These bird mites tend to live in the skin that doesn’t have any feathers. If you look with magnification at the crusts, there are tiny holes where the mites move in and out of the skin.

Pet birds often experience mild itchiness. As the infection advances and the crusts expand over a larger area, the mites can seriously damage the deep tissue—like the tissue that grows the beak—and there can be pretty extensive permanent damage to the beak.

The pet bird might show signs of discomfort and swipe his beak, and he may not eat or use his beak to chew. As the infection progresses, the bird’s toes can become scarred and distorted, secondary infections can start and the nails and parts of the toes can be lost, never to regrow. The pet bird also can become lame.

Scaly face mites come from another affected bird and typically are passed along when the birds are very young, such as from the breeding flock. Some birds never show symptoms, and their immune systems prevent the mites from growing.

Mites that live on the feathers and the skin are less common than the other mites. In general, a pet bird scratches at himself with his feet and beak more than normal preening. The pet bird might have irritated skin as well as missing or chewed feathers.

If the infestation is heavy enough, some mite species can suck enough blood to cause anemia (lower than normal level of red blood cells). And some species, like the red mite, migrate between the host bird and external hiding places, such as perches, bedding and the corners of bars in bird cages.

In cases like this, birds generally are restless, scratch during the night and end up tired during the day. Skin and feather mites tend to be more common on birds who are exposed to affected poultry or wild birds, such as those kept outside.

One way to detect these bird mites is to look around hidden crevices within your pet bird’s environment during the day. They also can congregate on your bird’s feathers near his vent.

It seems like a weird concept to think that there can be mites crawling around within our birds’ bodies, but because they have complex air space layouts, this offers moist, protected areas in which bird parasites can develop.

Air sac and/or tracheal mites more commonly are seen in the smaller “passerine” birds (songbirds), such as canaries and finches. Much less frequently are they seen in the parrot species, especially the larger ones.

Birds who have these mites tend to show respiratory effects, such as labored or more rapid breathing, and you might hear noises like clicks or wheezing when your pet bird is breathing. The bird might cough or sneeze, open his mouth and shake his head. There might be mild nasal discharge, especially if a secondary bacterial infection develops.

Since the respiratory passages are very narrow, a heavy bird mite infestation can block the trachea and suffocate the bird. Some birds become so distressed with the effects on their breathing that they refuse to eat, lose weight and show general signs of sickness and lethargy.

These bird mites can pass between birds if an infected bird joins the group. Because these mites are hidden within a pet bird’s systems, observing the respiratory symptoms is the only way to detect these mites.

Initially, infections can be symptomless if there are too few mites to irritate the host. Over time—months or even years—the bird mites reproduce, grow in number and then cause issues at that time.

What to Do About Bird Mites

If your pet bird has mites, it might signal that your bird’s immune system is not working adequately, and your pet bird’s diet might be deficient. It also can indicate that your pet bird has been exposed to unhealthy birds and there might be other infectious agents to worry about. Additionally, it can reveal flawed hygiene.

Most bird mite infection fears are unfounded. People often reach for bird mite treatments because they mistake feather dander for mites or think normal feather preening is a bird scratching for mites. They especially assume that any feather picking or destruction is caused by mites, whereas mites are a less common cause of feather picking.

Your avian veterinarian is your greatest resource to help you confirm that mites actually are causing your bird’s symptoms and guide you to the best treatment. Your veterinarian also can help you determine the underlying reason why mites are causing issues for your pet bird.