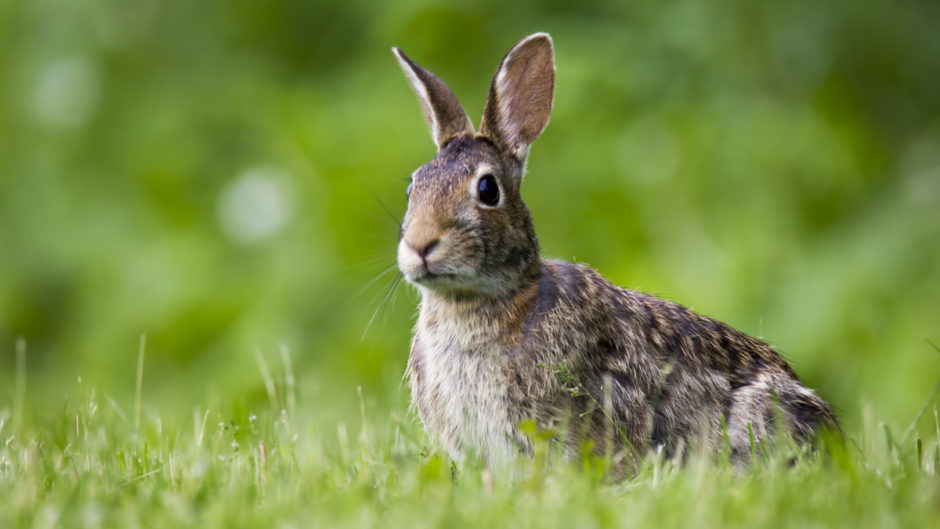 While the names often are used interchangeably, and people regularly confuse the animals for one another, rabbits and hares are completely separate species. In fact, they have a lot more differences than similarities!

Differences Between Rabbits and Hares

Hares usually have longer ears and hind legs than rabbits, and they have black marks on the tips of their ears. Via Mike Baird/Flickr

These long-eared mammals share the order Lagomorpha and the family Leporidae, and then they split at the genus level, with more than 50 species in 11 genera. More than 30 species of hares are in the Lepus genus. Rabbits and hares do not interbreed in their natural habitats. Genetically, they have different chromosome numbers, according to Dr. Steven D. Lukefahr, who started out raising rabbits as a youngster and now is a geneticist and professor at Texas A&M University in Kingsville. He likens it to the difference between a horse and a donkey; they are different animals altogether, therefore there are biological differences as well as behavioral differences. Some people find it surprising just how much these species differ, from gestation to diet to lifestyle.

A basic contrast between them is that rabbits have been domesticated, and hares have not. We can find both mammals in the wild on every continent, but hares usually are not kept as pets or raised as livestock.

Starting with their births, these critters are opposites. For example, rabbits experience a short gestation of 31 days, and the altricial, or undeveloped babies, are born furless with closed eyes and ear canals, Lukefahr said. Called kits or kittens as well as bunnies, they cannot even regulate their own body temperature yet.

“Hares are opposite with a longer gestation of 42 days, and they are born larger with fur, eyes open and able to eat feed the same day,” Lukefahr added.

Born precocial, or in an advanced state, baby hares, called leverets, can fend for themselves pretty quickly. Experts say they even can run shortly after birth. No doubt their natural habitats reflect these differences.

In the wild, most rabbits are born in underground burrows or tunnels where the social adults live in groups or colonies. This certainly adds to the babies’ protection in their vulnerable state. Most hares, on the other hand, are born in above-ground nests where the adults live alone, only coming together in pairs for mating.

As they grow, we can see small, distinguishing features that help us tell the difference between rabbits and hares. For example, hares are much larger than the compact rabbit, and they generally have longer ears and hind feet. Hare ears include black markings on the tips, and their short tails are longer than the rabbit’s bobtail.

Most of the year, the fur of wild rabbits stays a gray-brown agouti, which is two-toned with more than one color on each strand. Hares, however, are known to change from a brown or gray color in the summer to white in the winter.

Both rabbits and hares are herbivores, mainly eating plant matter, but experts say that rabbits tend to eat softer foods like flowers, grasses, fruits and vegetables while hares dine on harder items like tree bark, seeds, sprouts and twigs. And to keep from becoming a predator’s meal, rabbits take a hiding approach by burrowing or hopping away in a zigzag motion, while hares use their great speed and jumping prowess to escape.

Pet rabbits live much longer than wild rabbits or hares, and owners often give them nicknames in addition to given names. Via Barry Hall/Flickr

When it comes to showering our pet rabbits with affection, the nicknames we choose shine through. There’s no shortage of cute and descriptive names rabbit owners have come up with. Here are some of the most popular ones I found.

What nicknames do you call your rabbits?

While rabbits usually give birth in burrows within a colony, hares give birth above-ground. Cottontail rabbits are an exception, as they do not burrow. Via Tony Alter/Flickr

As you read about these hoppy animals, a variety of names or terms show up that can make things a bit confusing. So let’s go through the most common ones together.

A misnomer, it’s not actually a hare. This domesticated rabbit looks a lot like the jackrabbit.

This is a generic term for males, and you probably have seen this term used for males in other species, such as deer, goats and sheep, Lukefahr said.

We see this all the time, and it generally refers to a young rabbit, especially a domestic one.

This is an older term for rabbit.

This wild rabbit species from the Americas is different from the domesticated rabbit from Europe and frequently is confused with a hare because it does not burrow, Lukefahr explained. The cottontail’s name describes its short, stubby tail, which is white on the underside and looks like a piece of white cotton on its bottom.

These are females and, like bucks, the term describes other female species, such as deer and goats.

A group of hares.

A group of domestic rabbits.

Another misnomer, they are hares, not rabbits. Lukefahr said that the term is not used outside the United States, and these animals were named for their donkey-like ears; jacks are male donkeys. People called them jackass rabbits, which later was shortened to jackrabbit.

These are newborn or young rabbits.

A newborn or young hare.

A group of young rabbits.

Rabbit in Other Languages

Have you ever wondered what rabbits are called in different languages? Here are a few to ponder!