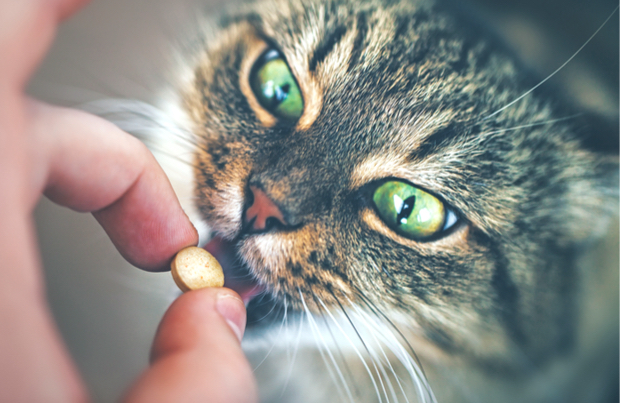 Some supplements for pets can indeed promote wellness, while others are a waste of money—or worse, are detrimental to your pet’s health. Knowing which supplements to try and which to skip can get confusing, especially when there are so many options on the market.

What Is Milk Thistle?

Milk thistle (Silybum marianum) is a spiny, purple-colored flowering herb native to the Mediterranean and North Africa, but it is now commonly grown in North America.

And it’s more than just an attractive plant. Milk thistle, according to the National Center for Complementary and Integrative Health (NCCIH) is coveted for its silymarin, a flavonoid that’s extracted from the plant’s seeds and transformed into supplements.

Although more comprehensive studies are needed, there is evidence that milk thistle can be used to treat liver problems in dogs and cats.

“We think it acts as an antioxidant—an anti-inflammatory agent that may help the liver to heal when it is diseased,” says Donna Raditic, a diplomat of the American College of Veterinary Nutrition.

Benefits of Milk Thistle for Dogs and Cats

The studies on milk thistle benefits may be lacking, but according to integrative and wellness veterinarian Karen Becker, even conventional veterinarians are now supporting milk thistle for dogs and cats because of its potential liver benefits.

“There are no drugs to improve liver function,” she says. “All of the drugs doctors prescribe stress the liver; they don’t support or detoxify it.”

“Pets suffer from more toxic insults to the liver than most people suspect,” says Becker. “In addition to congenital disorders, birth defects from poor breeding, and viruses and bacteria that can infect the liver, pets live in incredibly toxic environments.”

At least for now, milk thistle’s benefits for pets are based primarily on anecdotal information and clinical impression, Raditic says.

“To be truly honest and fair, there are many conventional treatments and drugs used in both human and veterinary medicine that are considered ‘standard of care’ that are not founded in well-designed research studies,” she adds.

How to Give Milk Thistle to Pets

It’s always a good idea to run any supplementation past your pet’s veterinarian, and milk thistle is no exception. But there are some basic guidelines on using milk thistle for cats and dogs.

Milk thistle supplements are available in different forms, including capsules (which Becker suggests sprinkling on food), tinctures and powders like Herbsmith Milk Thistle dog and cat supplement. She says the form you choose depends on how your pet usually takes medication.

How often you supplement depends on your pet’s general health, as well as a brand’s dosage guidelines, which Becker says can vary.

“Many pets with liver conditions take the supplement twice a day, but many pet parents supply it intermittently, either several times a week, or a week out of the month, to assist in healthy detoxification for their animals,” she says.

Some of Becker’s patients have been on a detoxification protocol intermittently for their entire lives.

“I believe these animals are healthier and more immunologically resilient over their lifetimes,” she says.

Side Effects of Milk Thistle for Dogs and Cats

The NCCIH reports that milk thistle is a generally safe supplement, but there are general side effects of milk thistle to be aware of.

“Milk thistle can detoxify the liver so efficiently that it drops drug levels below therapeutic concentration, making the therapy less effective,” says Becker. “In a few other rare instances where dogs or cats require consistent medications the same effect can be true. So if your pet is on a daily drug protocol for managing other health conditions, always check with your veterinarian before introducing any new supplement or herb.”

Most concerns with milk thistle center around it not being standardized or well-regulated—as is often the case with supplements. Some of these quality issues, says Raditic, can include heavy metal contamination, possible allergic reaction to fillers and mis-identification of herbs.One sign that a brand adheres to high quality standards is membership to National Animal Supplement Council. Raditic says the group makes an effort to regulate pet supplements.

The science is not conclusive, but there is evidence that milk thistle can potentially minimize liver failure in your dog or cat, as well as act as a liver detoxifier. Milk thistle is generally considered safe, but be mindful of interactions with other drugs and supplements. Before giving your pet any supplement, including milk thistle, it’s best to contact your pet’s veterinarian.

Paula Fitzsimmons is a freelance writer and researcher specializing in companion animal health and nutrition, and science. She’s written for clients like Prevention magazine, PetMD.com, PawCulture.com, Parrots magazine, and University of Texas-Arlington. She lives in Madison, Wisconsin with her husband and feathered family members, including parrots Whit and Sweetpea.