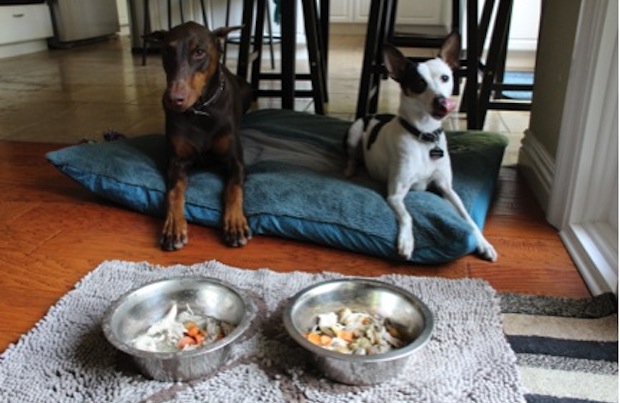 My dogs love food. I know many dogs do, too, but mine are at the extreme end of the spectrum. Much to their dismay (I suspect), their meals are pretty well regulated. Aside from a few occasional baby carrots, my husband and I are careful not to give our pups table scraps and snacks and “people food” remains a bit of a mystery to them.

So when I decided to try out several slow-cooker dog food recipes, their little canine senses were completely overloaded.

Dog Crockpot Recipes: Who Has the Time?

We’re a busy household, so making gourmet dog food wasn’t something I thought I’d have time for. But when I stumbled upon a slew of slow cooker dog food recipes, I quickly realized that I definitely could muster up a few minutes to toss a bunch of ingredients into a crockpot and walk away for hours until it was done. And boy did my dogs thank me for undertaking this task.

Before heading off to the store to do some canine food shopping, I consulted with several veterinarians to make sure that everything checked out ingredient wise in the recipes I selected. I was given the green light on all three meals but included a few vet notes within the cooking instructions below for owners to consider before making these on their own.

For the next three days, I was busy in the kitchen cranking out some tasty food for my 2-year-old Doberman, Lyla, and 6-year-old Rat Terrier, Rocky. Here’s what I made and how they reacted: Cover and cook on low heat for five to six hours or high heat for two to three hours, stirring as needed.

Veterinarian recommendations:  Per the suggestion of Jennifer Hennessey, owner of Animal ER of NW Houston, I used lean beef, as this recipe can be on the fattier side. She also suggested swapping the beef out for chicken or ground turkey if you are making this for dogs that have a weight issue. I opted for 90% lean beef.

The verdict: My dogs don’t often eat beef, so this was a real treat. Before I filled up their bowls for dinner at night, I scooped some of this into each of their Kongs. Since this recipe includes rice, It was perfect for molding into a toy. It kept my dogs busy for an hour and when my husband came home from work, they were so enticed by trying to lick every last drop of food out of their treat dispensers that they didn’t even want to engage in their nightly game of fetch. And then they had more of this dish for dinner. It was a good day for the Pajer pups. Add all ingredients, except peas, parsley, and olive oil, to the slow cooker.

Cover and cook on low six to eight hours or high four to five hours.

About 15 minutes before turning off the slow cooker, add peas and parsley.

Veterinarian recommendations: Dr. Shari Brown stresses that to prevent choking, it’s crucial to make sure to remove the bones from the crockpot after making this recipe, unless you cook with de-boned chicken thighs. It’s also important to core the apple and remove its seeds before chopping it up for this dish, as apple seeds can be toxic to dogs. The verdict:  This one was a colossal hit in my house. When the recipe was done, I filled their bowls, arranged them on their placemats and made them lie down on their beds to pose for some pre-dinner photos. Having to pose for pictures while their meals sat inches away from them was just too much for them to handle—especially for Rocky, who was born for one reason and one reason alone, to eat anything that he comes into contact with. Once I gave them the okay, they flung themselves into their dog bowls and began to gobble their food as fast as they could. Lyla ate so fast I had to remove her bowl several times and give her a second to catch her breath. As this is a stew, it’s a messier dish and broth got flung around the floor, but my dogs loved it. Place chicken thighs and ground chicken in the bottom of the crockpot. Cover with water.

Add all other items.

Veterinarian recommendations:  The same warning applies to the above about making sure to remove the bones from the chicken thighs before serving to your dog. I’d like to add that after consulting with the vets, most of them decided that, though these meals were all dog-friendly and nutritious, they wouldn’t recommend serving them as a replacement to your dog’s regular diet. Hennessey suggests thawing the frozen leftovers several times a week and mixing it with your dog’s kibble as an extra boost. You can also use it as a once-in-a-while special meal or snack. The verdict:  I thought that the previous recipe couldn’t be topped until I placed this one in front of my dogs. After three days of cooking, they enjoyed everything that I made for them but this one was clearly the winner. For the next two hours following this meal, my dogs kept returning to their bowls in the hopes that an additional serving would magically appear. After three days of cooking, I ended up filling my freezer up with loads of extra dog food. I even took some over to my neighbor and let their dog sample some of the leftovers. It’s safe to say he was also a fan!