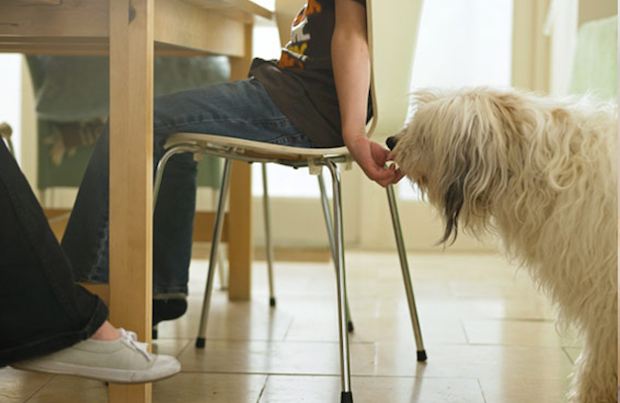 The Human Equivalent of Feeding Your Pet Snacks

You hear a whine from under the dinner table and there sits your poor dog waiting for you to toss him a metaphorical bone — or maybe even a real one. But what you have is a cookie, so you toss him that instead. No harm done, right, it’s only a cookie?

In fact, given the size difference of humans and animals, a small portion of something for us can almost constitute a meal for your dog or cat. Our pets need remarkably few calories compared to our own caloric needs. Read on to see what different snacks mean in human terms when you feed them to your pet.

WARNING: Consult your vet before providing any “human food” as some may be dangerous for pets.

One small oatmeal cookie for a 20 pound dog is the caloric equivalent of an entire hamburger for a person. For a human, that’s around 300 calories, or almost a sixth of the average woman’s recommended daily calories and an eighth of man’s daily calorie intake. It could be worse, though: An oatmeal cookie at least provides some fiber — chocolate chip cookies, meanwhile, are a definite no-no since chocolate is harmful, and even toxic, to dogs.

One hot dog for a 20 pound puppy is the caloric equivalent of three hamburgers for a person. That single hot dog may not look like much but it has around 175 calories, which is a third of what a 20 pound dog should be consuming. “I think people get gratification out of their pet eating and being happy about it, but they don’t think about the long-term consequences,” says Dr. James Darden, DVM, chief of staff at Banfield Pet Hospital in East Houston, Texas.

One ounce of cheese for a 20 pound dog is the caloric equivalent of 1 ½ chocolate bars for a person. Cheese is loaded with fat — a single 1 oz. slice of American cheese packs 105 calories and 5.5 grams of saturated fat, while Cheddar is even worse: 114 calories and 6 grams of fat. That ounce of cheese constitutes about a third of a small dog’s daily required calories, says Dr. Darden. “And for a cat it’s worse — it’s about half his daily caloric intake, so two slices of cheese for a cat is all it needs in a day.”

One potato chip for a 10 pound cat is the caloric equivalent of half a hamburger for a person. You may think that a thin potato chip is lighter than air, but don’t forget that it’s been fried in saturated fat and coated in sodium. For your small cat, you’re almost providing lunch with a potato chip. A superior option, says Dr. Darden, is a small handful of kibble. He suggests you subtract whatever you feed your cat as a snack from her evening meal so she doesn’t overeat.

One cup of milk for a 10 pound cat is the caloric equivalent of five chocolate bars for a person. Besides the fact that whole milk provides 122 calories per cup — and even skim clocks in at 86 calories — neither dogs nor cats should drink it because it can upset their stomach, says Dr. Darden. A good alternative is fruits or vegetables, especially frozen, such as green beans, peas, and apples. (Ed. Note: Consult your vet before providing any “human food,” as some fruits and vegetables are dangerous for pets.

A single ounce of peanut butter (about a tablespoon) is close to cheese in calories, packing around 94 calories. It also contains around 8 grams of saturated fat, which is 12% of what a human needs, and of course far higher for a dog or cat. Just 8 to 10 tablespoons of seemingly innocuous peanut butter may be delicious, but it would provide all the calories a 30 pound dog should eat in a single day. And for a 10 pound dog, just three tablespoons would fulfil his daily caloric requirements.

Jerky strips are beloved by dog owners because they’re easy and make no mess, but a single jerky strip provides around 88 calories. “So three of them for a small dog provides most of his caloric needs without any [significant nutritional value],” says Dr. Darden. “Every time you give one of these treats you’re filling him up with extra calories and making our obesity numbers increase.” Jerky strips are also very high in sodium (providing around 12% of a human’s daily sodium needs), which can lead to high blood pressure in both dogs and cats.

Almost every cat loves tuna, but at 36 calories per ounce she shouldn’t be eating much of it, if at all. Despite the fact that tuna is a good lean protein source, it’s not providing a balanced diet, says Darden. An ounce of tuna provides about 16% of the daily calories required for a 10 pound cat, he adds. “I’d stick with premium [pet food] brands rather than getting tuna off the shelf and preparing it myself.”

What About Pet Treats?

Commercial pet treats are okay in moderation and if they are of high quality. Ask your veterinarian for some recommendations and don’t forget to subtract the treat’s calories from your pet’s overall daily calorie consumption so he or she doesn’t inadvertently become overweight.