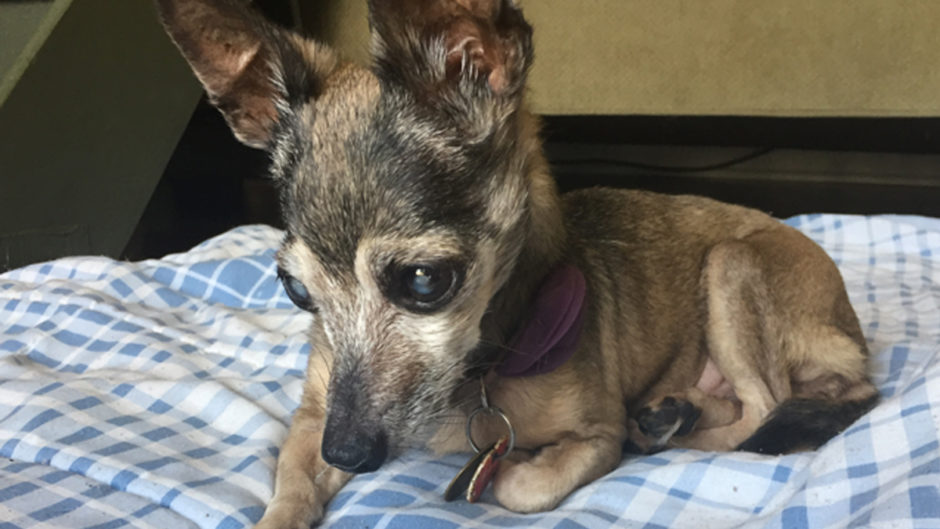 Losing a pet can be a heartbreaking experience, but ask yourself this: If your dog is nearing the end of his life, should you spend time grieving, or do you make the most of the time you have left with him? If you ask Michele Allen and Dr. Judy Morgan, they’ll tell you they are strong advocates of the latter. “Senior dogs are very much in the moment,” says Michele Allen, co-founder and director of Monkey’s house. “They’re willing to make the best of each and every day.”

To support her beliefs, Michele and her husband founded Monkey’s House—a nonprofit hospice for dogs and sanctuary for senior dogs who are homeless and terminally ill. Their main purpose is to improve the quality of life of terminally ill dogs by providing them with a loving home environment along with holistic nutrition, exercise and veterinary care—something they may have never experienced.

Monkey’s House was founded in 2015 after Michele had considerable experience fostering dogs nearing the end of their life. She began fostering when her own dog passed suddenly in 2009. “I wanted to give back and help a little more. I started collecting blankets and supplies to give to the shelter. Before I knew it, I started fostering.”

There was one foster dog that stuck out, who taught Michele an important lesson that she would never forget. His name was Goldie, a Golden Retriever with a tumor on his side. He was scheduled to have surgery once Michele returned him back to the shelter, but in her experience as a nurse, Michele could tell that Goldie wasn’t well enough to make it through the surgery, or be able to thoroughly recover afterwards. There was no convincing the shelter otherwise, as shelters typically have limited resources to give these pets the thorough care that is sometimes needed. “Shelters make the most of what they have,” she says.

Thus began a long and fruitful journey of planning to open a senior dog sanctuary and hospice for dogs. From 2010 to 2015, Michele spent a lot of her time at dog behavior training classes and nutrition seminars to get all the information she thought she might need. In 2014, Michele attended a nutrition class at a fundraiser, and met the veterinarian who would play a huge role in the formation and operation of Monkey’s House.

Dr. Morgan is a nationally renowned author and veterinarian certified in acupuncture, food therapy and chiropractic care for dogs, cats and horses. For Monkey’s House, Dr. Morgan is responsible for directing the medical care and individualized nutrition of the residents. “When [Michele] walked in, we instantly liked each other. We both come from a horse background,” Dr. Morgan says.

At the time that the two met, Michele had adopted Monkey, a stray with a severe heart murmur. “He wasn’t fond of people,” Michele says. Despite his decidedly closed-off demeanor, he stole Michele’s heart. Determined to improve his quality of life, Michele recruited Dr. Morgan for help. After adding supplements to his treatment and changing his diet, Monkey lived for 17 months, when the diagnosis by the shelter vet estimated he would live for only two weeks. He passed in February 2015.

After Monkey, Michele started bringing “more and more of her own pets and foster dogs she was working with” to Dr. Morgan. “She said she wanted to start a senior dog hospice. Every time I saw her we would talk about it a little bit.”

The wheels were really set in motion when Dr. Morgan stumbled upon a Facebook post from a friend about two Cocker Spaniels who needed to be adopted. That’s when she called up Michele and said, “Hey Michele, I’ve got your first two dogs for Monkey’s House.” At the time, Michele wasn’t fully prepared to begin her venture, but this phone call was enough to spur her in the action. Four weeks later, Michele already had six dogs under her care in this new hospice for dogs.

Bea was pulled from a local kill shelter moments before she was to be euthanized. She is blind and deaf, has a dislocated hip and a seizure disorder, and is believed to have a brain tumor. She is 17 and still full of life.

Dr. Morgan could foresee the potential magnitude of this initiative right away, and encouraged Michele to set up criteria for the dogs they are willing to admit. These rules are strictly enforced, and include no bite history, dog- and cat-friendly personalities and being diagnosed as being in a terminal state. There needs to be the right combination of ailments as well, so most dogs are admitted on a case-by-case basis. “If there were too many blind dogs bumping into sighted dogs, it would create stress. There’s a balance we need to keep,” says Michele.

FiFi, a 16-year-old white Poodle Mix, has brittle diabetes and arthritis. Buck has severe heart disease, is deaf and blind, and has seizures and multiple food allergies. They are enjoying a recent field trip to the Brendan T. Byrne Forrest. They both came from a local kill shelter.

Monkey’s House hospice for dogs is located on a 6-acre farm in Burlington County, NJ in a peaceful, rural community. Today, there are about 24 dogs in the home, and a staff of 50 volunteers dedicated to giving these dogs an amazing life. Dr. Morgan says that Michele will sometimes call the volunteers and ask if they can just sit with a dog in their lap. “We do whatever it takes to make the dogs comfortable and happy,” says Dr. Morgan.

Fiddle was surrendered to a kill shelter and was said to be old and full of cancer. She’s not old and does not have cancer. Although she has arthritis, she’s got a long beautiful life ahead of her. Fiddle has been adopted by one of the fantastic volunteers at Monkey’s House.

Each dog is on a specialized diet according to Dr. Morgan’s prescription, along with whatever medications the dogs may need to improve their quality of life. Exercise is another important aspect the team utilizes to keep the senior dogs healthy. This includes frequent trips to the Pine Barons, the woods or the beach. “We don’t just wait for them to die,” says Dr. Morgan. “We work as hard as we can to fix them up.”

Nothing they say about old dogs is true–Blaze and LuLu learn new things and bond with each other and with us. LuLu passed last fall from a brain tumor. Blaze is doing wonderful. He is blind and an insulin-dependent diabetic, but he has lots of years ahead of him. He is available for adoption through Brookline Labrador Retriever Rescue.

Once a beloved senior dog does “cross the Rainbow Bridge,” Dr. Morgan and Michele agree that it is a rather tranquil experience. “We don’t want to cut them short. It’s been two years, and we’re starting to really come to grips with the natural dying process,” she says. “As long as you are controlling … [what] you consider suffering, dying naturally is not that horrible.” Michele describes the process as “a very uplifting experience.”

Since the inception of Monkey’s House in 2015, there have been 51 dogs in total that have been under Michele’s care. There have been 17 deaths, and 10 “imposters”—dogs who ended up living despite their terminal diagnosis, all thanks to the phenomenal care from the team. Since Monkey’s House is not insured to adopt out animals, they turn the rehabilitated dog over to a sister adoption facility, where the dogs are able to find pet parents who can give them a loving home.

Mr. Peebody and Lucy, two Beagles who bonded during their stay.

While there are other pet hospice facilities for senior dogs, Monkey’s House has a quality that others lack. “[Monkey’s House] is very, very unique,” Dr. Morgan says. “Other hospice groups aren’t necessarily trying to change their quality of life in the way that Michele does. That’s a huge part of the fame of Monkey’s House.”

Harley, before her 15-pound mass was removed.

Harley, after a 15-pound mass was removed. She is recovering quickly.

If you struggle dealing with a senior dog or any pet who is terminally ill, Michele suggests “Don’t waste time grieving beforehand; Ask yourself, ‘Did I do everything this dog loves to do?’ They’re not done living, so keep moving forward. Take time to be in the moment with [your] dog.”

Field trip with 22 dogs and 11 volunteers. Some dogs walked, a few were carried, and some rode in strollers. They all had a blast–so did the volunteers!

Samantha Schwab, Junior Editor
As an aspiring cat mom, Samantha Schwab can be found mining keywords, meticulously editing Pet Central blog posts or standing at her desk (usually all three!). An espresso shot and kitty cuddles are the only things that stand between Samantha and conquering the (pet) world!