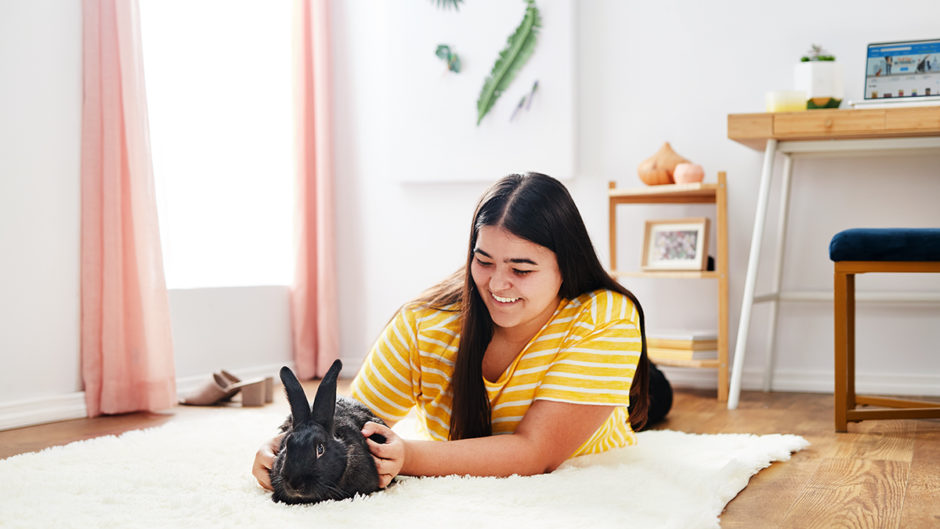 Rabbits always have been a pet kids love. They’re cute, fluffy and relatively easy to care for. But these days, it’s not just kids who are jumping for pet rabbits.

Millennials—those born between the early ’80s and mid ’90s, with some including the early 2000s—have found companionship in pet rabbits of all breeds. The American Pet Products Association (APPA) reports that in 2017, millennials were the primary pet-owning demographic at 39 percent of U.S. pet owners, compared to baby boomers at 32 percent.

Not only that, but, according to the APPA, far more millennials own small animals than baby boomers or even Gen X, with rabbits being the most popular small animal owned.

It’s no surprise that these little cottontails have stolen the hearts of millennials.

“Rabbits can be playful, loyal, smart and affectionate,” says Tierra Griffiths Bonaldi, a spokesperson for the APPA. “They make good pets for people living in smaller spaces, such as apartments, which is common housing among millennials.”

Bonaldi adds that rabbits have lower maintenance requirements—they don’t have to go on multiple walks like dogs, for example—and they provide the companionship, love and affection that many pet parents crave.

“Rabbits make great companions and can give just as much love as they receive,” she says.

Adriana Yera, a millennial and resident of Miami, Florida, is quick to agree with Bonaldi. She says the love that blossomed between her and her Havana rabbit, Midnight, is something she wouldn’t trade for the world.

One of the Family

Yera met Midnight in 2018 during an outing with her grandmother.

“I went with my grandmother to the flea market and saw him in a cage in a pet store,” Yera says. “He was $10 and [living] in horrible conditions.”

Yera, a college student who lives at home, felt compelled to add another member to her family, which already included a dog, Chanel, and a bearded dragon, Cheech.

“I promised to take care of him … and now, everyone has just fallen in love with him,” she says.

Not knowing much about rabbits, Yera turned to the internet to help her care for her new charge. There she watched YouTube videos on proper rabbit care and found support through online communities.

“My best advice for those interested in caring for a new pet rabbit is to do your research,” Dr. Antin says. “Read up on what that entails, and ask yourself if you can and will provide the care, space, enrichment and diet it needs before impulsively acquiring a bunny.”

A bunny lover himself, Dr. Antin agrees that rabbits make great pets for children and adults, including millennials.

“My first pet actually happened to be a bunny … his name was Paco,” Dr. Antin says. “Bunnies have big personalities—more so than most people expect. They can make for a great little buddy and contribute to a strong human-animal bond.”

When getting a rabbit, you’ll need to make sure they have all the things they need to stay happy and healthy. They need a place to hide and sleep as well as place to go to the bathroom. Some experts recommend setting up an exercise pen to give your bun space to run and play.

You also need to provide your pet rabbit with a proper diet, which includes hay, fresh vegetables and commercial pellets. A poor diet can lead to weight problems, indigestion, serious illness and even death, according to experts.

Although Midnight is able to open the fridge on his own, Yera says she is conscientious about his diet. About 90 percent of Midnight’s diet is hay, and he especially loves to eat parsley, kale, romaine lettuce and cilantro, she says. As a treat, fruit makes its way into his diet.

“He loves bananas as a treat, as well as strawberries,” Yera says. “I make sure to mix it up every day as much as I can.”

“If your bunny is acting sick in any way including lethargy, not eating, diarrhea, etc., then I highly encourage you to consult with your local rabbit veterinarian ASAP,” he says. “Once bunnies start exhibiting concerning clinical signs like this, that tells us vets that they’re at moderately to severely sick.”

Last, patience and love go a long way when it comes to rabbit care, especially when training them.

“I would say you first need patience, a little more with rabbits,” Yera says, adding that Midnight is potty-trained. “If they are not given a lot of attention, they can be depressed. They do learn, as long as you are persistent.”

Now 1 year old, Midnight has lived with Yera’s family since he was about 4 weeks old. He sleeps in his “mom’s” bed with her. To protect him when she’s at work or school, Yera puts him in his cage inside her room.

“So many people are stuck on dogs and cats [for pets],” Yera says, but adds that living with a rabbit offers few differences. “It’s the same love that comes from a dog. They look at you and rely on you for everything.”

Want to read more? Check out: