Military working dogs are the soldiers you didn’t know you should salute. Since the United States military officially recognized “war dogs” in 1942, over 30,000 pups have served under the U.S. alone, bravely fighting alongside their human handlers in tasks such as scouting for enemy forces and hunting down explosives.

Below, meet five of these four-legged soldiers and learn all about the amazing contributions they made to their countries over the last 100 years of service. 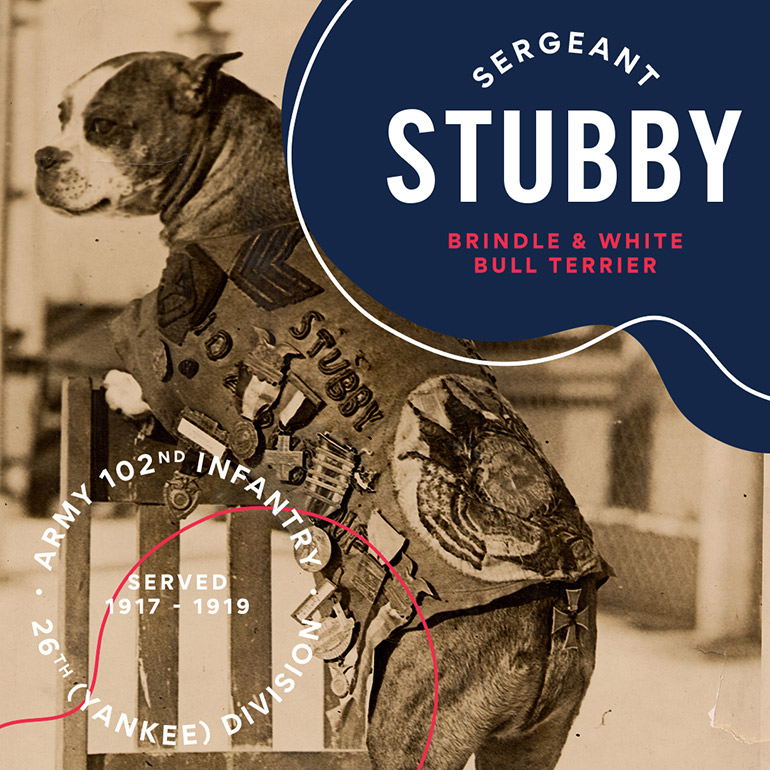 One of the most famous military dogs on the early frontlines was Sergeant Stubby, a little stray brindle and white Bull Terrier that went on to display outsized bravery on the battlefields of WWI. Arguably the most decorated U.S. military dog, Stubby was present for four offensives and 17 battles in total, serving the U.S. Army for around 18 months. It all started with a salute.

His story begins in 1917, when he wanders into the encampment of the 102nd Infantry, 26th (Yankee) Division of Massachusetts and becomes their mascot. When this division was deployed to France, no way were the soldiers going to leave sweet little Stubby behind. Corporal J. Robert Conroy wrapped him in his greatcoat slung on his arm, told him to be quiet and smuggled him up the gangway as they boarded the ship, recounts Curt Deane, the Corporal’s grandson.

“When he was discovered by one of the senior officers, Stubby knew to salute him,” Deane says, noting the pup’s signature move of bringing his paw up to his forehead. “My grandfather swore that he never taught that trick to Stubby.” From that day forward, he provided comfort and aid to troops in the trenches.

“As World War I was the first truly mechanized war, it was also the war where shell shock [PTSD] was very prevalent,” Deane says, explaining how soldiers would often pet and hug Stubby for comfort. “He truly helped them in their moment of need.”

In his time with the 102nd, however, Stubby was more than an emotional support dog.

“Following a battle, Stubby would go out into the no man’s land and search for wounded members of his team,” Deane says. “When he found someone, he stood by them until the medics arrived. It became common knowledge among the 102nd that if Stubby found you, you were going to be fine.”

Stubby earned a Purple Heart in April 1918, when he was wounded in the foreleg by an exploding grenade during the raid of a German-held town. He returned to the United States in 1919, where he eventually met three presidents (Wilson, Harding and Coolidge) before passing away in 1926, held in the arms of his old friend, Cpl. Conroy. (Fun fact—Stubby is the subject of an animated film called “Sgt. Stubby: An American Hero,” which came out in 2018. Check it out.) 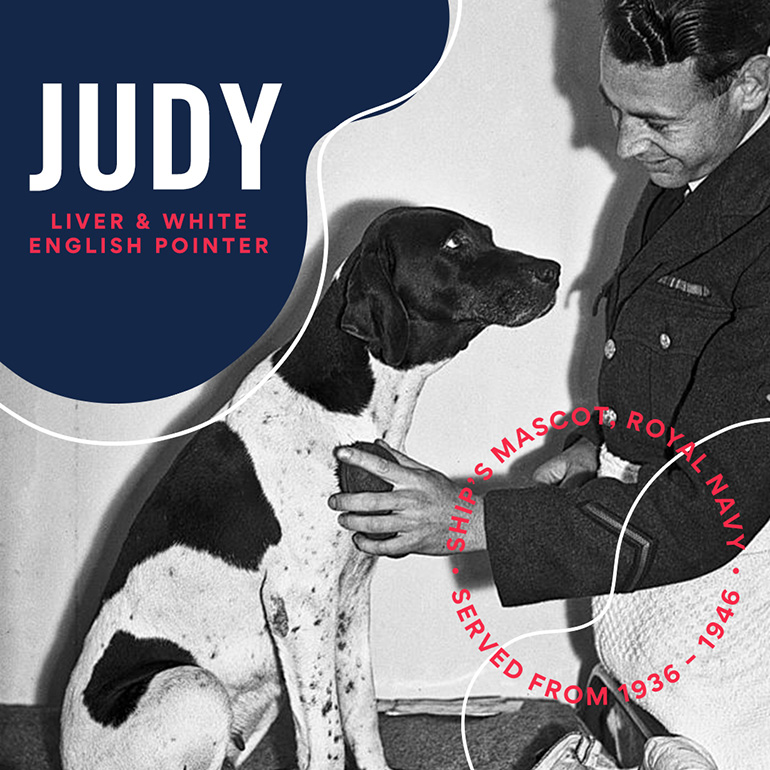 Judy, a beautiful liver and white English Pointer, and the only animal POW of WWII, has an epic tale of bravery and heroism that stands to this day. Serving aboard a ship bound for battle in the South China Sea, Judy not only survived that ship’s torpedoing, she kept other survivors alive on a deserted island with her ability to sniff out fresh water. After escaping the island, Judy reportedly marched alongside soldiers for a grueling 5 week, 200-mile hike seeking safety, only to be captured and sent to a hellish Japanese POW camp in Indonesia.

Surviving on scraps of leather while she fiercely protected her human allies, Judy was finally saved when Leading Aircraftman Frank Williams convinced a drunken camp commandant to register the dog as a camp prisoner. This act protected her from guards’ attacks and ensured that she was regularly fed. Judy and the troops were moved from camp to camp until Allied forces finally arrived.

In 1945, the prisoners were finally freed. Williams took Judy back to the UK. In May 1946, she was awarded the Dickin Medal, described as “the animal equivalent of the Victoria Cross,” the highest military decoration awarded for valor in the United Kingdom. Williams and Judy remained together for the rest of her life before she succumbed to cancer at the age of 13 in 1950. (Read more about this brave and determined dog.) 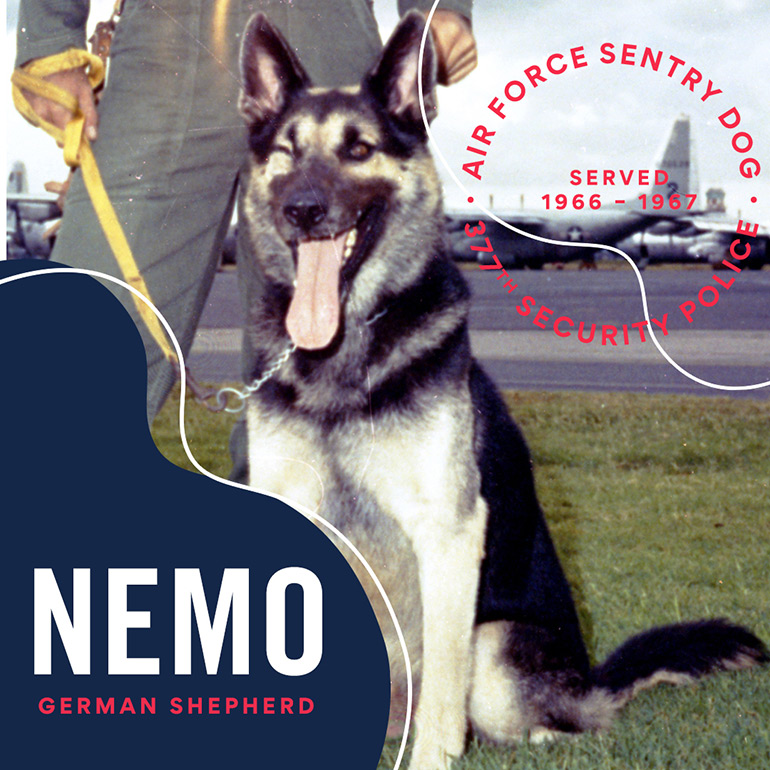 Sentry dogs are trained to warn their handlers of the approach or presence of strange persons and are utilized for guarding vital installations. Look no further than the story of Nemo A534 a German Shepherd who put his life on the line again and again during the Vietnam War to understand the superior instincts and sheer bravery of these remarkable service dogs.

It’s 1966 and the war in Southeast Asia in raging on when the Tan Son Nhut Air Base in South Vietnam comes under attack. Nemo, a sentry dog with the 377th Security Police unit, reportedly catches an unfamiliar scent and alerts his handler, Airman Robert Throneburg. Dozens of enemy forces have sneaked through an opening in the perimeter’s barbed wire fence, scattering throughout the base. The danger is palpable and very real, but only Nemo along with other Sentry dogs on the base can sense it.

With Airman Throneburg following close behind, Nemo races in pursuit of the intruders. Throneburg kills two of the enemy intruders, but not before being wounded. Nemo, too, fell victim to a bullet, which entered under his right eye and exited through his mouth. Though seriously injured, Nemo continues to attack other intruders while guarding Throneburg until help finally arrives.

On June 23, 1967, Air Force HQ directed that Nemo be returned to the U.S. with honors as the first sentry dog to be officially retired from active service. After making several publicity tours and television appearances, Nemo moved into his permanent kennel at Lackland Air Force Base in San Antonio, Texas, where military working dogs from all branches are trained. There, he basked in the glow of retirement (and his celeb status) until his death in December 1972 at the age of 11. 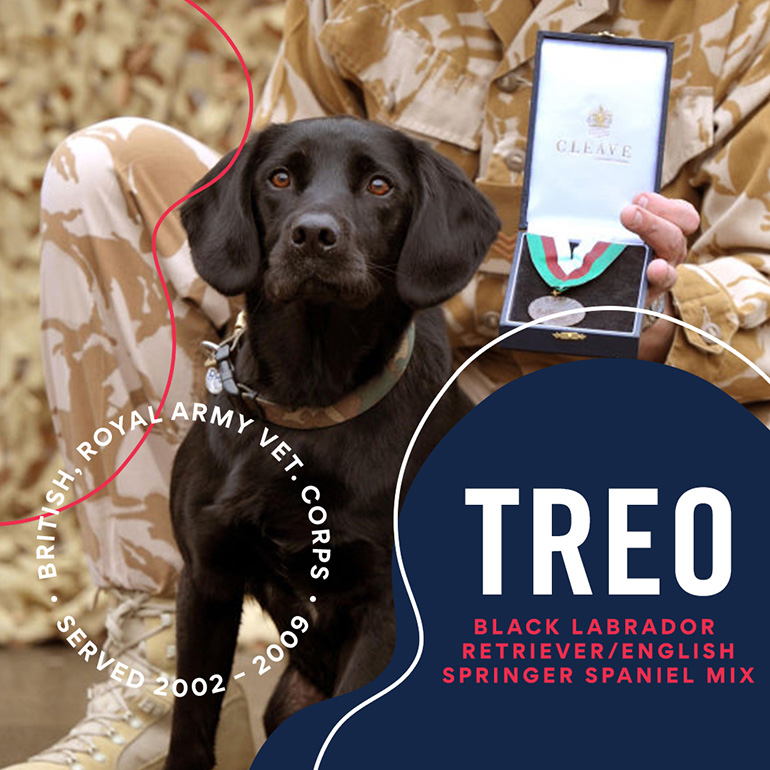 Moving forward in history, meet badass, beautiful, bomb-sniffing dog Treo, a black Labrador Retriever and English Springer Spaniel mix who took on the Taliban in Afghanistan while serving as an Arms and Explosives Search Dog with the Royal Army Veterinary Corps in the British Army.

In 2008, Treo and his human Sergeant Dave Heyhoe were sent to the Helmand Province in Afghanistan to support British troops. There, Treo developed a reputation for his uncanny ability to find roadside bombs. While on patrol, Treo sniffed out a “daisy chain” improvised explosive device—a device made of several bombs wired together and carefully hidden by Taliban insurgents along the side of a road. About a month later, he is said to have saved a platoon (and many civilians as well) from guaranteed casualties when he discovered a similar device. Heyhoe later referred to Treo as a “four-legged metal detector.”

After seven years of front-line service, Treo retired in 2009 and spent the rest of his days with Heyhoe. The little hero was presented with the Dickin Medal at the Imperial War Museum in London in 2010. In October 2015 at age 14, he died and was buried with his medal and a Union Jack.

Treo is gone, but his memory—and his ashes—live on, thanks to Sgt. Heyhoe, who not only penned a book titled, “It’s All About Treo: Life and War with the World’s Bravest Dog,” about the adventures he had with his dog, but also had Treo’s ashes tattooed into his leg! 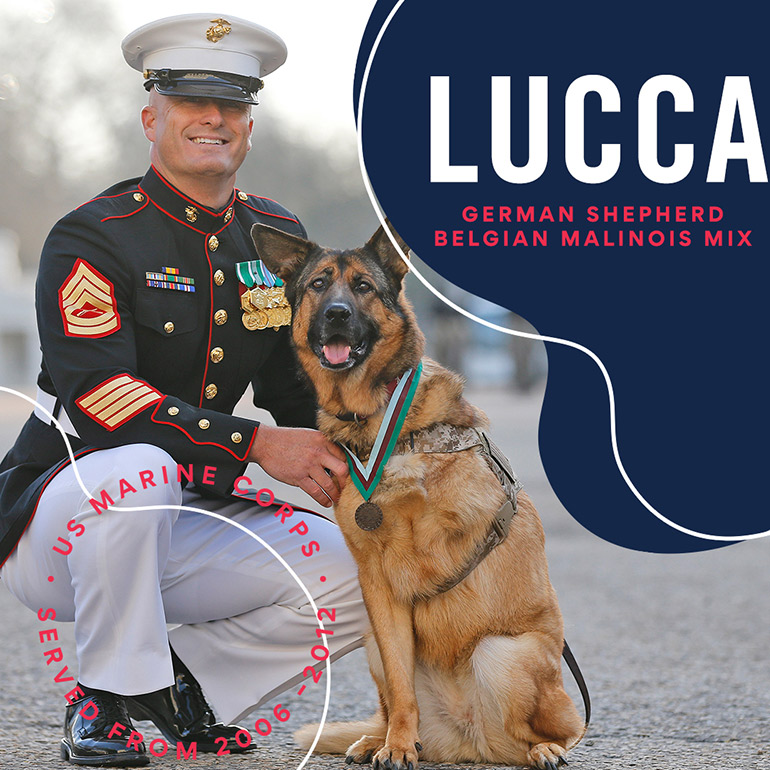 Lucca’s remarkable record of 400 successful missions protecting the lives of thousands of troops during her six years of service can be summarized in just eight words: no soldiers or Marines died on her patrols.

Lucca K548, a German Shepherd Dog and Belgian Malinois mix, served as an off-leash Specialized Search Dog in the United States Marine Corps from 2006 to 2012, trained to detect arms, ammunition, and explosives. Deployed twice to Iraq and once to Afghanistan during her six-year career, her expertise centered on detecting explosives—and she did so, literally risking life and limb. Lucca, her handler noted, was a true pro that could almost be seen processing information and, importantly, rarely barking.

On March 23, 2012, Lucca suffered a wound while leading a U.S. Army Special Forces patrol in the Helmand Province in Afghanistan. After locating one IED, a second boobytrapped IED exploded. Lucca’s chest and torso were burned, and Army veterinarians had to amputate her front left leg.

Always brave and resourceful, the canine Marine quickly recovered and was walking as a tripod only 10 days after her injury! Lucca officially retired in May 2012 and spent her final years relaxing with her original handler, Gunnery Sergeant Chris Willingham, and representing her military K-9 community—even riding atop a “Canines with Courage” float in the Rose Parade in Pasadena, California, and receiving the prestigious Dickin Medal, the highest honor an animal can receive for military service.

These exemplary pups demonstrate the loyalty, intelligence and grit inherent in military working dogs. They guard and protect their humans, fiercely defend their friends, and stick with their comrades until the end. We are very proud to introduce these canine heroes to you.