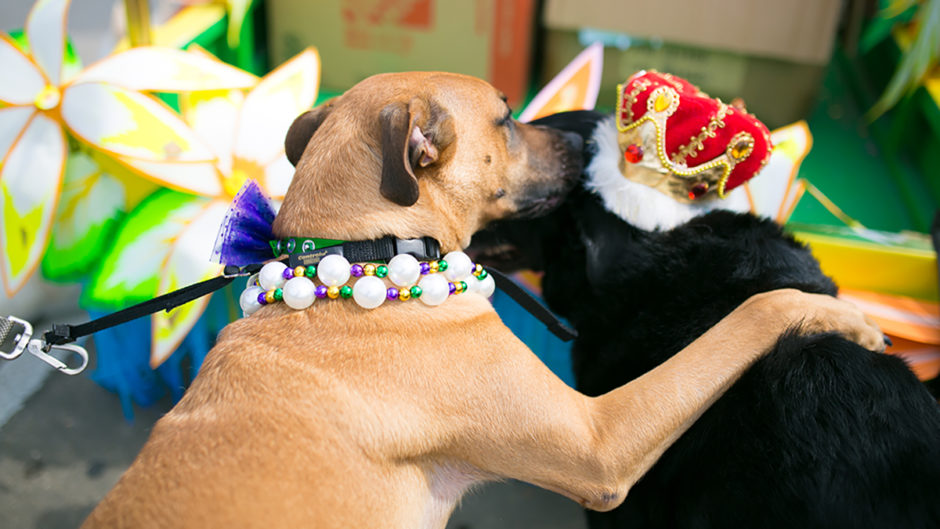 You’ve probably heard about the excitement and spectacle of Mardi Gras, but what about Mardi Paws? While colorful parades with costumed participants getting wild and crazy are nothing new for Mardi Gras, what sets Mardi Paws apart is that its exuberant marchers are, well, a little extra wild. In fact, this Mardi Gras celebration really goes to the dogs—with a canine court known as “Royal Hairs,” unique dog-related “throws” (keepsakes thrown to the crowds) and, of course, its own dog costume s parade.

Mardi Paws takes place at the tail end of Carnival season on the lakefront in Mandeville, Louisiana, which is about a 30-minute drive north of New Orleans in St. Tammany Parish. The $25 per-pooch registration fee benefits charities that help children and animals, including the Ian Somerhalder Foundation, established by actor Ian Somerhalder of “The Vampire Diaries” and “Lost.” Being an animal lover who grew up in nearby Covington, Louisiana, Somerhalder created the foundation to empower, educate and collaborate with people and organizations to have a positive impact on the planet and all its creatures.

Mardi Paws’ went into its 24th year without a hitch at 2 p.m. February 18, 2018, the weekend after Fat Tuesday. There were about 25,000 spectators; 400 puppers of every breed, size, color and personality; and, for good measure, a donkey and a small flock of parrots—an unprecedented crowd brought out by picture-perfect weather after a cold and rainy Mardi Gras season. So, while it rained like cats and dogs for other parades, there were no such problems for these pooches.

Any proper Mardi Gras parade includes “throws,” or small keepsakes tossed to the crowd, and this Mardi Gras parade was no different. In addition to the traditional cups, beads and doubloons, there were also spoofs of throws—rubber dog poop and stuffed cats—tossed into the outstretched hands of the adoring crowd. Buck Henry and London Richard, the canine king and queen of the parade, tossed nothing less than golden poops.

All four-legged marchers were required to be in costume; this year’s theme was Fables, Fairy Tales and Nursery Rhymes. Get-ups ranged from the Three Little Pigs to Humpty Dumpty to Charlotte, of Web fame. Many smaller fur babies were pushed in stroller-like, fully festooned floats. A panel of professional judges assessed the costumes based on photos posted online. Awards, based on originality, attention to detail, and how well the costume hewed to the theme, were given at the “Post-Parade Pawty.” The top dogs take home—what else?—dazzling poop trophies designed by local art teacher, Fernanda Cristianil.

The dogs really seemed to have a howlin’ great time. Happy barking could be heard throughout the event and there was lots of laughter from kids and adults, too. It was hard to tell who had the most fun—the MC and judges, the human parade participants, the spectators or the four-legged furry marchers. Two news reporters from local station Fox 8 were so caught up in the spirit, the pair broke into impromptu break dancing right at the Reviewing Stand.

What else could be better than adorable pups decked out in fun costumes parading around? Not to mention, having a big rubber poop thrown at you—best parade souvenir ever! Mardi Paws is a celebration for the ages for pups and owners alike!

Christina Vercelletto is a pet, travel and lifestyle content specialist and a former editor of Parenting, Scholastic Parent & Child, and Woman’s Day. She lives on Long Island with her Chiweenie, Pickles, and 20-pound Calico, Chub-Chub.