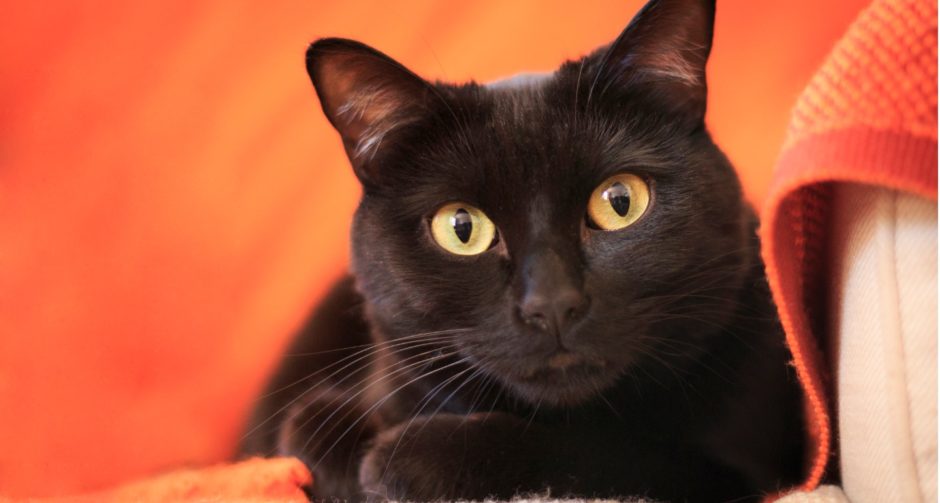 What’s the Story on Black Cats?

Black cats have long been steeped in myths and contradictory perceptions. In Scottish folklore, the black cat shows up as a fairy creature who resembles a large black cat with a white spot on its chest. It’s most likely based on Scottish wildcats, or a hybrid of these and domestic cats. The Cat Sith, as it’s called, supposedly roamed the Scottish Highlands, trying to steal people’s souls before they could reach the gods. This was said to happen as the cat passed over a corpse before burial, so vigils (called the Feill Fadalach or Late Wake) were held to ward off or distract the cat with catnip, riddles and music.

Although these legends of soul-grabbing black cats exist, there are those who are flipping the script with stories that feature the black cat as the hero instead of the villain. One heart-wrenching example is Neil Gaiman’s “The Price,” a short story that appears in “Smoke and Mirrors.” This time, a black cat is an angel who actually protects the narrator from the devil each night, unbeknownst to the narrator, until he waits up one night to see where the cat’s mysterious injuries come from. The black cat in this story was actually based on a feral cat who kept visiting Gaiman’s house and mingling with the other stray cats he took in. This black cat was the size of a small mountain lion, according to Gaiman. He eventually found a home with a woman who fell in love with him, so his story has a happy ending.

Unfortunately, not all black cats’ stories are uplifting, especially when it comes to those in shelters. Some rescue workers believe these raven beauties are half as likely to be adopted than other cats, and that they are the first to be euthanized, perhaps because there are simply more of them entering the shelters. Whatever the reasons, they’ve led to the creation of special days that celebrate these stunning felines, including National Black Cat Appreciation Day on August 17th in the U.S., and National Black Cat Day in late October in the U.K. (founded by Cats Protection). On these days, shelters usually reduce or drop the adoption fee for black cats. This also happens on Black Friday, and black cats are promoted during Adopt a Less Adoptable Pet Week that was started by Petfinder.com, and occurs in the third week of September.

More Than Meets the Fur

So what’s so special about a black cat? For starters, they aren’t all just one color. A cat who seems to be solid black may actually be one of several tones—coal black, grayish black or brownish black. “Solid” black color cats must have a black cat parent who passes on the dominant black cat gene, and they must also have the recessive gene that creates a solid color and represses the tabby pattern. There are 22 cat breeds that can have solid black coats, according to the Cat Fanciers’ Association, and there’s one really unique breed that is exclusively black—the sleek and chic Bombay. Fun fact: If your black cat is a daily sunbather, her fur can actually fade or “rust,” because the black fur pigment is pretty fragile. Check out your kitty’s fur next time she’s stretched out in her favorite sunny spot and see if there’s a reddish-brown tinge.

Be a Black Cat Advocate

Whether or not you’re lucky enough to own a black cat, there are simple things you can do to help out these exquisite felines. Here’s a list of quick and easy ideas:

•   Contact a local animal shelter, especially around Halloween, to help out with efforts to adopt out black cats.

•   Become a black cat foster parent—ask your local shelter specifically for black cats or any cat or dog that’s been there the longest.

•   Donate to cat rescues, or those that are dedicated to black cats, such as blackcatrescue.com.

•   Keep your black cat inside on or near Halloween for their safety.

Although black cats haven’t had great press over the years, fishermen have long regarded them as bringers of good luck, and this is true in the U.K., too. It’s time to get on board and share our love of the black cat!

Check out our curated list of must-haves for black cat lovers: