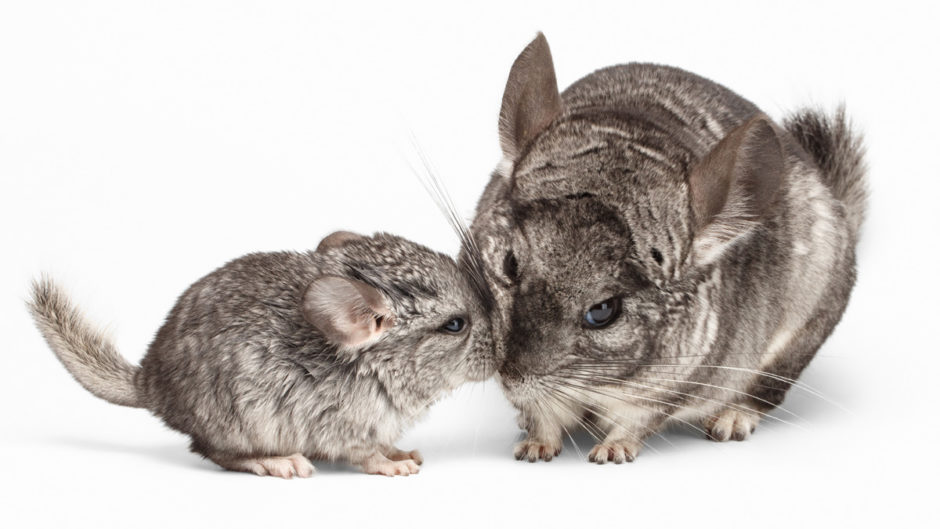 What are the life stages of chinchillas?

The life pattern of chinchillas is similar to that of humans. If a chinchilla has a solid genetic background, is fed a balanced diet and given good care, some can live 20 to 30 years. However, it is more common to see life spans in the 5 to 18 year range.

The gestation period for chinchillas is 111 days. At that time, baby chinchillas (known as “kits”) are born. Typically they can weigh anywhere from 25 to 80 grams at birth, but the more normal range tends to be 35 to 60 grams. They have a full coat of fur and open their eyes within minutes of birth. Newborns are often wobbly at first and huddle under their mother for warmth and food. By the evening of their first day, they are quite agile and will be running around the cage. Baby chinchillas can move very quickly so extra caution should always be taken when opening cage doors and/or holding them. Kits typically are left with their mother until they are 8 to 12 weeks old. They depend upon her for care and protection. They also learn behaviors and some socialization skills from her. Males should always be separated when they reach 8 weeks old and moved to a separate cage. Females can remain with their mothers indefinitely as long as they get along well.

At the 8- to 12-week mark when nursing winds down, the kits become “weanlings.” In many instances, they are separated from their mother and placed in new cages either alone or with other weanlings of the same sex. This is a stressful, transitional time for young chinchillas. It is important to watch them carefully to be sure they are eating properly and thriving. At this age, chinchillas are extremely active and sometimes a bit hyper. They are very busy and energetic with unbounded curiosity. Careful handling of a young chinchilla is necessary to keep him/her safe.

After weaning, chinchillas enter the juvenile stage, which continues through most of their first year. They are growing, developing and learning. Sometimes they are doing this alone while other times they have same-sex siblings/cagemates or even a parent to guide them on their journey. Their personalities go through various changes from hyper to mellow and everything in between. They may have traits similar to their parents or they may not. Male chinchillas are often considered for breeding situations at the age of 9 to 12 months.

Chinchillas are usually considered adults when they reach a year old, although many may continue growing throughout the following year. Female chinchillas who have developed well are often assessed and considered for potential breeding programs.

Both male and female chinchillas are active and energetic young adults. They will continue to be this way for many years with good care. Their level of activity tends to depend more upon how they feel rather than how old they are. And just as with humans, there can be sickness, genetic issues and serious diseases that can shorten their life spans.

Chinchillas can age at different rates. We’ve seen some chinchillas exhibit signs of old age as young as 9 years and others who don’t show it until they are in their 20s. Chinchillas tend to become quieter and a little less energetic as they get up in years. Some may actually look “older,” lose some weight and appear a little more frail. This is why it is important to watch their diet and sometimes add supplements or additional hays to keep them healthy. Sometimes an older chinchilla may change patterns or routines to accommodate his needs. For example, a favorite hammock that is suddenly no longer in use high up in a cage may need to be lowered to permit easier accessibility.

Be watchful of your chinchilla’s behavior patterns, as changes can sometimes indicate your chinchilla is not feeling well. Many times older chinchillas will exhibit a sudden change in eating habits, especially if they are nearing the end of their life span. This can be due to illness or possibly failing organs. The chinchilla may refuse food, minimize activity, wind down and pass away quietly.

When a chinchilla reaches advanced years, it is very important to monitor food/water intake to be sure your pet is getting enough nutrition. It is normal for some elderly chinchillas to become thinner. Enriching the diet with supplements may help your chinchilla retain weight. Sometimes older chinchillas develop malocclusion, which will hinder their ability to eat pellets and hay. Hand-feeding is a reasonable way to extend life. Gerber’s baby food, cereal with apple and banana, plus some ground-up chinchilla feed pellets have worked for us. Hand-feeding is advised for as long as the owner wishes to devote the extra time and also for as long as the chinchilla is still enjoying a reasonable quality of life. At some point, most chinchillas with old-age malocclusion will start to give up. They may look depressed and may stay in the corner of the cage.