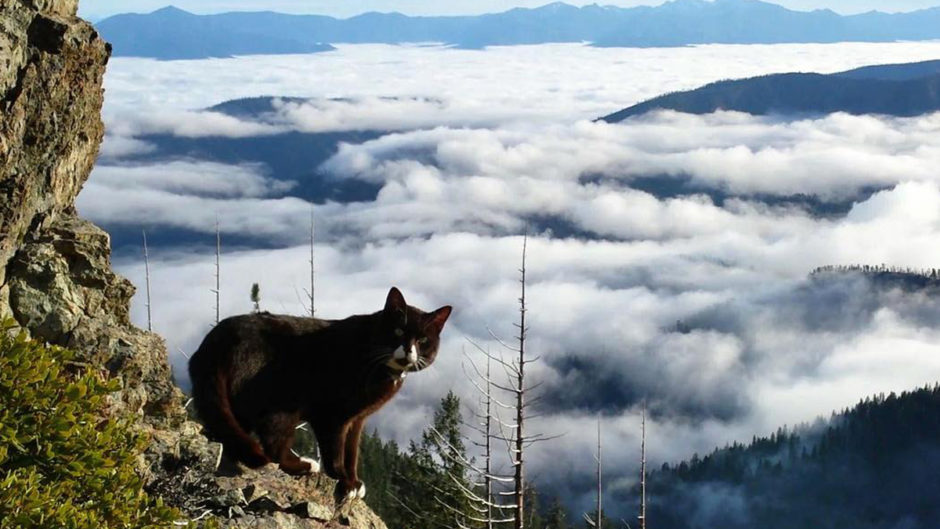 Burma with his head in the clouds.Courtesy of Stephen Simmons.

His 73,000-plus Instagram followers know him as “Burma the Adventure Cat.” But for Stephen Simmons, Burma is known as “savior.”

An Iraqi war vet with post-traumatic stress disorder (PTSD), Simmons had been going through tough times and was living out of his Jeep. But fate would bring sunshine into his life in the form of a tiny kitten.

“I got Burma at [a] dark time in my life,” Simmons, 53, recalls. “He really changed my perspective… gave me a new outlook on life.”

Initially, Simmons was worried whether Burma would be able to adjust to his lifestyle. However, the cat not only adapted quickly to life on the road, he also became a bona fide adventure cat—scaling mountains, climbing trees and even swimming in rivers.

The Simmons family enjoying some sunshine. Courtesy of Stephen Simmons

Where the Adventure Began

In 2008, Simmons had the left military and was suffering from PTSD and depression.

He found himself homeless and living out of his Jeep all over the state of southern Oregon with his military service dog, Puppi, for about five years.

“I was homeless because I chose to be in Oregon, on the other side of the country from where I was from,” Simmons says. “I simply didn’t have an income to have a place to live and often didn’t have but a [few] dollars to our name at the end of the month.”

Life wasn’t easy, but then in April 2013 Simmons met a kitten who would change things for the better.

“This young homeless woman had a carrier of kittens for free,” Simmons says, remembering the day he met Burma.

A very young Burma at the beach. Courtesy of Stephen Simmons

Simmons says growing up he was a cat person, but being on the road all the time wasn’t ideal for a cat. Still, the eight-week-old kitten managed to steal his heart.

Simmons named the kitten Burma after what he believes to be the cat’s breed: Burmese. Burma immediately adjusted to his new life, going on adventures across the Pacific Northwest with Simmons and his new dog brother, Puppi.

“The first couple of days with Burma was simple,” Simmons says. “We just brought him into our lifestyle without any change, and that was especially easy, not only because of how confident he was, but [also since] he was so small, he was easy to handle as well.”

They slept in parking lots at times, but being out in the wilderness is where Simmons was most comfortable.

“Our life was sort of like one big trip,” Simmons recounts. “We lived in our Jeep and moved around the town of Grants Pass [Oregon] throughout the day. We didn’t always sleep in the same place either, and then we were often in the mountains on adventures. So, we were always on the go.”

Burma seemed to flourish in the wild.

“We would put him in his backpack and go,” Simmons says. “He just loved the wilderness. It was just home to him … he didn’t know the difference.”

“I’ve always thought as if Burma was intended to live our lifestyle,” Simmons adds.

Shortly after Burma joined Simmons, they made their first big trip together.

“We went from southwest Oregon for a trail race I had signed up for,” Simmons says. “It was a high desert type of environment and Burma was simply right at home every minute of each day as we were a pack, and home to the three of us was wherever we were together.”

Burma and Puppi taking a run in Oregon. Courtesy of Stephen Simmons

“There wasn’t any preparation for it, everything we had was in our Jeep,” he continues. “We just went and lived life here or there or wherever in the moment.”

During the spring and summer, Burma and his new family would try Northern California living at times, even climbing the 3,600-foot Mt. Shasta.

Then in 2014, the trio began traveling to more states. Somewhere along the way, Simmons took a picture of his distinguished-looking cat, posted it on Instagram and the rest is history.

Burma peering out at a Utah desert. Courtesy of Stephen Simmons

On Instagram, the number of followers skyrocketed. In addition to pictures of Burma in the wild, visitors from around the globe were treated to beautiful photographs that capture Simmons’ love for his cat.

Jumping across rocks on the Klamath Mountains of southwestern Oregon. Posing mid-span on the Mile High Swinging Bridge in Avery County, North Carolina. Yawning in Acadia National Park along Maine’s Atlantic coast. Inquisitively checking out his desert surroundings in Texas. Burma was an instant celebrity everywhere they traveled.

The world is his oyster. Courtesy of Stephen Simmons

“Wow, is that a cat?” is the No. 1 thing people would ask when seeing the friendly feline. Simmons says meeting and talking with these people about Burma also helped him socialize.

In fact, one of those followers, moved by Simmons’ relatable story and his unique life with Burma, reached out to him. Now that woman, Nicole Rienzie, is Simmons’ girlfriend. And she and her two Instagram cats, Monk and Bean, have joined the trio, becoming a blended family of six.

“I think of them as our kids,” Simmons says. “They are definitely family to us.”

Today, Burma has visited 31 states and still travels with his growing family, but more so on the East Coast.

The sextet still loves the great outdoors and both Instagram accounts continue to grow.

The compelling photos of Burma intrigue many, says the proud cat dad. And the words of love he writes in some of the posts certainly don’t hurt.

Burma and his proud dad, Simmons. Courtesy of Stephen Simmons

“Although Burma grew up on the go, in parking lots and out in the forests and wilderness, shaping his life, most cats would have only maybe adapted in that situation. Burma thrived in it,” Simmons wrote on Burma’s first birthday. “He was made for it, honestly. He has done a lot to make me believe in something much bigger than us and this world again. And the fact that a cat could have such an intended purpose has made me realize there must be some much bigger purpose for us, too.”