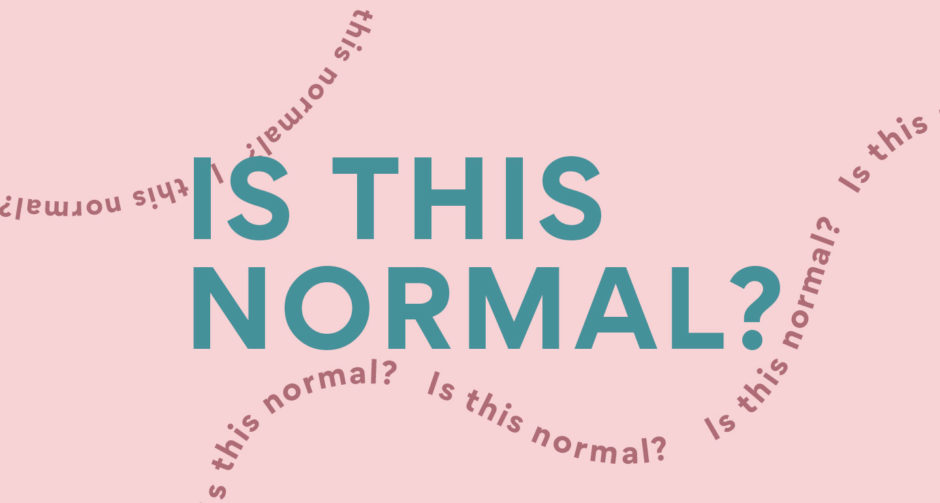 My dog follows me into the bathroom. Is this normal?

A: The short answer is a resounding "yes.” And the reason why our dogs do this actually makes a lot of sense.

Much like parents of human children, all pet parents know that having a dog means you rarely go to the bathroom alone. For some strange reason, dogs love to follow us to the porcelain palace, where they sustain the most uncomfortable kind of eye contact ever. (Well, maybe the second most-uncomfortable, right behind that time you accidentally locked eyes with your mother while you all watched “Superbad.”)

That’s certainly the case for dog mom Leigh, a Pittsburgh, Pennsylvania-based marketing and PR professional whose roughly 10-year-old rescue Chihuahua, El Vez, has been following her into the bathroom ever since she first brought him home.

“We have excellent conversations and brainstorming in the bathroom,” she says.

The morning chats are nice and all, but why do dogs follow you into the bathroom, taking a seat right beside the toilet every time we do our business? It's apparently not because they're returning the favor, after watching us stand beside them while they do their own thing outside.

In fact, it’s kind of our fault.

“We’ve bred them for hundreds of years, if not thousands, to want to be near us,” says Kayla Fratt, an International Association of Animal Behavior Consultants (IAABC)-certified dog behavior consultant and the owner of Journey Dog Training in Missoula, Montana. "It absolutely makes sense for them to follow us from room to room, and there’s no real reason for them not to follow us into the bathroom."

So, it’s not because they’re being little creeps who like to watch us poop. Actually, Fratt says there's "no indication" that they even know what a bathroom is—or what we're doing in there.

"Even if they 'know' what you’re doing, why would it matter to them?" she says. "It’s certainly reading too much into things to assume that your dog is being gross or weird. He just wants to be near you. It’s really that simple."

The same goes for whether they’re watching us relieve ourselves or take a shower or do our makeup. The fact that SO MANY DIFFERENT THINGS can happen in the bathroom just might be part of the reason why our dogs are so curious about it.

"Sometimes you go in there for a minute or two, and sometimes when you take a bath, it might be for an hour," says Paul Sheinberg, CPDT-KA, founder and primary dog trainer of Pawsitive Paul's Dog Training in Baltimore, Maryland. "Because of that uncertainty, dogs tend to follow you when you’re going toward that direction, if you have that type of dog that sticks by you or gets nervous when you leave."

On the flip side, if your dog doesn't follow you into the bathroom (or anywhere else in the house), that doesn't mean there's anything wrong with them—or with you.

"Some dogs are just more Velcro-y than others. They follow and shadow their people more," Fratt says. “It’s more common in some shepherding breeds than in some more aloof breeds, but it’s not abnormal dog behavior at all."

If you'd prefer to have a few minutes to yourself, it's not difficult to train your dog to let you walk down the hall and into the bathroom without them.

"By far, the easiest way is to teach them a basic ‘stay’ and when you’re done with your business, give them a treat or some praise for being so brave on their own," Sheinberg says. She suggests teaching the stay command without the use of the bathroom, first, just to get your dog used to it. Then, once they’ve mastered the command, transition to the bathroom area for small durations throughout the day to practice. “It should be rectified in a positive and fun way within days."

So, there you have it. It’s perfectly normal for dogs to follow you into the bathroom—and perfectly normal if they don’t. The only cause for concern would be if your dog gets seriously anxious about being alone while you’re in the bathroom, even for a few minutes. It could be a sign of separation anxiety in dogs.

"If not following you into the bathroom makes your dog distressed, it’s time to get help," Fratt advises. She suggests calling a certified dog behavior consultant or another behavior expert—rather than an obedience trainer—to work through the issue.

Back in Pittsburgh, Leigh says El Vez has actually been giving her a little more space lately. "I will say, since quarantine, I've noticed that it's happening less and less," she says. "He actually seems to be actively trying to find time to socially distance himself from us humans."

Why Do Dogs Circle Before Lying Down?