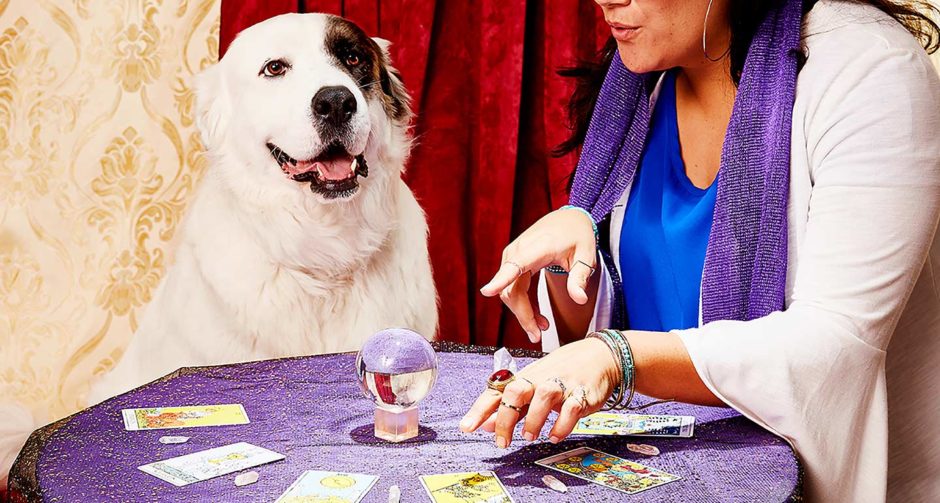 Wouldn’t it be nice to know what’s going on inside your dog’s mind? This is a thought I have at least three times each day, as my dog army-crawls across the carpet and proceeds to do zoomies across the couch. What exactly is he thinking? Unfortunately, I don’t possess any cool, supernatural abilities, so I can’t read his mind. But there are people who claim they have this skill—dog psychics.

What is a Dog Psychic?

Dog psychics, aka animal communicators, claim they can connect with and converse with your pets—living or deceased. Some say they are able to communicate with humans in the spirit world as well, but not all claim to have this ability.

A pet psychic supposedly speaks to your fur babies telepathically. Pet parents might seek a pet psychic’s services to answer questions they may have about their pet’s behaviors, feelings or health-related concerns. They might also need closure with pets who have passed away.

Why I Contacted a Dog Psychic

I’m obsessed with my dog, Sullivan. He’s my sidekick, my office mate (I work from home), and my first fur child. My husband and I adopted him from a rescue organization when he was 2 years old. He’s now an adorably cranky old man at age 9, and sometimes I wonder if he enjoys the life we built for him.

Since I work from home, I wonder if he gets bored. I worry that he wishes he had a playmate to keep him entertained while I’m on the computer all day.

I also have lingering regrets about separating Sully and his brother when we adopted him. The two of them were turned into the local shelter together, and according to the rescue group, Sully was extremely dependent on his brother. Whenever his brother was taken out of sight, even if for a moment, Sully would whimper until his brother returned.

The rescue group wanted them to be adopted separately so that Sully would become more confident and develop independence. It’s seven years later and I wonder if he still misses his brother. Is he traumatized from their separation? These are questions I can’t answer.

After Googling pet psychics, I contacted Charles Peden. He had decent reviews on Yelp and is known to be a gifted psychic medium and animal communicator. I requested an appointment through his very professional-looking website, paid $75 for a 30-minute phone reading, and waited for him to contact me to confirm. Within 48 hours, his wife responded and scheduled our reading for the following week.

I was equal parts nervous, excited—and extremely skeptical. Would this dog communicator tell me that Sully is miserable? That I’m a terrible dog mom? Would it be hilarious listening to him trying to communicate with my dog? And most importantly, would I buy any of it?

I consider myself to be a spiritual person—not exactly religious—but I do believe that there are aspects of our existence that cannot be explained by science. I believe that there are people who possess talents and skills beyond our comprehension, and I think some people are gifted with the ability to contact spirits who are no longer with us. Is every psychic the real deal? I doubt it. Some are just brilliant actors and storytellers. Some are con artists. But was Charles Peden legit or a scammer? I decided to go into my reading with an open mind and see what he had to say.

For the appointment, I was told to sit in a quiet room. The only information Charles needed prior to our reading was my dog’s name.

When he called, I was immediately put at ease with how warm and friendly he was. He didn’t take himself too seriously, while still being confident in his abilities. He asked what my main question for Sully was, and I told him I wanted to know if he was happy. I started giving him a little history on Sully, mainly because I just love to tell people about my precious boy, and Charles stopped me.

“I don’t want you to overshare, and I also like to get to know the pet’s backstory myself, by talking to them directly,” he said.

He said that he would be verbally asking Sully questions, and Sully would be communicating his answers telepathically. I was not to answer on Sully’s behalf.

Charles would occasionally ask me a clarifying question, based on images he was getting, and I could respond with a yes or no. He also said that other pets I’ve come into contact with might reach out during our reading, so to be prepared for that. Sully was sitting in the room with me, so I could watch his reactions as Charles spoke to him.

Charles started talking to Sully, occasionally laughing and getting emotional based on Sully’s responses. He correctly guessed Sully’s general size, fur color and texture, his lack of interest in dog toys or vigorous exercise, and his exact age without me telling him.

At one point, Charles asked about a dog that he was seeing with wiry fur and a beard. I’ve never owned a dog who looked like that and Sully’s hair is soft and wavy, not wiry. Then he told me he could sense Sully’s sadness and it hit me—that’s what his brother looked like! His brother had black, wiry fur and looked nothing like Sully.

We talked about my concerns, separating Sully and his brother seven years earlier, and wondered if Sully is still in pain over it. Charles asked Sully about it, got audibly choked up over Sully’s response, and told me that Sully still thinks about him and misses him, but has healed a lot over the years since they’ve been apart.

Then Charles asked Sully if he was happy, if he thought I was a good mom and if there was anything I could do to improve his life.

Charles told me that Sully started sending him images of meatballs, and that he’d very much like a meatball to make his day better. My husband and I don’t eat meat very often, and I’ve never given Sully a meatball. We really don’t give him any human food at all. Charles said, “Well, he knows they exist and would really like one.”

As the reading came to a close, Charles said that Sully is very happy with our life together. He thinks I’m a good dog mom and that Charles was receiving waves of love when Sully thought of me. He also told me that the reason Sully sometimes doesn’t listen to me when I give him a command is because he knows how utterly adorable I find him, and he knows he can get away with anything, which admittedly, is 100-percent true.

Was This Dog Psychic the Real Deal?

Honestly, I don’t know if Charles was a true dog communicator. I kept my eye on Sully during the entire reading and he didn’t react like someone was in his head. At one point, he even fell asleep. However, I cannot explain how Charles correctly guessed those details about Sully.

Ultimately, I did feel closer to Sully, though. Now I ask him if he really thinks I’m a good mom, which is usually followed by a big smooch on my cheek. And my husband and I now joke with Sully on a regular basis that we don’t have any meatballs to give him, so hopefully one day he’ll let that go.