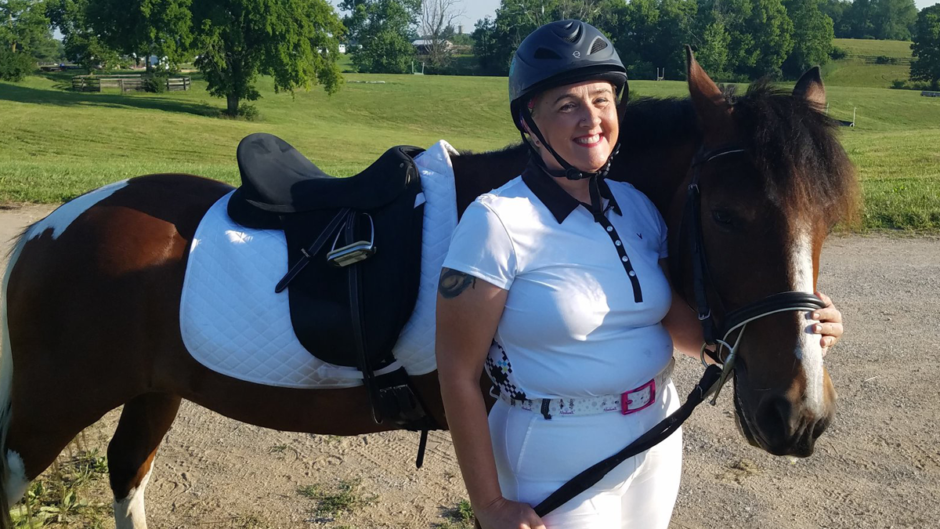 It takes a lot to keep a dedicated equestrian away from the barn. Devoted horse lovers will visit the barn in an ice storm or in blazing heat. And no matter how long of a day you’ve had, going to the barn is never a question.

But what if the day-to-day experience of being at the barn was hazardous to your health? How would you cope?

For horse lovers who are allergic to horses, hay, dust or other components of the farm environment, maintaining the equestrian lifestyle requires some management. The good news is, there are ways to manage horse allergies so you can continue to enjoy barn life—and still breathe. Proof of this are two lifelong equestrians who found a way to mitigate their symptoms and continue to enjoy their passion for riding.

From Rashes to Riding 5 Days a Week

Amanda Lane is a practicing family medicine physician and lifelong equestrian. Her parents were riders, and she grew up in the barn and around horses.

“Around 7 or 8 years old, I started to have itchy eyes, sneezing and rashes, especially when dealing with hay or dust,” Lane says. “Grooming started to lead to similar symptoms over time. By [the time I was in] college, these symptoms became even more pronounced and persistent.”

Lane discovered the source of her symptoms when she was in graduate school and spent weeks at a time away from her horses.

“Each time I went home to be around them, things started back full force,” she says. “I saw an ear, nose and throat doctor and had allergy testing. I was allergic to nearly everything in the barn as well as numerous trees and grasses.”

Prior to allergy testing, Lane took over-the-counter loratadine (Claritin) to alleviate her symptoms. Later, her doctor recommended allergy shots along with oral medication and an intranasal steroid. Lane says her series of allergy shots took the typical four years.

She adds that while allergy shots can benefit allergy sufferers, they are created to be patient-specific for particular allergens. If you move to a new region, you may be exposed to new pollens or other allergens that were not in your original shots, and that can lead to a return of symptoms.

Besides medical intervention, Lane takes some management approaches to reducing allergens. She tries not to wear barn clothes around the house and changes out of riding gear as soon as she gets home. She also uses an air purifier and is diligent about vacuuming frequently.

Working with Horses Was Never Out of the Question

Phoenix Franzen is another lifelong equestrian who deals with barn allergies. She’s an assistant manager at a riding-lesson barn in Lexington, Kentucky, and she has found ways to manage her symptoms so she can continue the career she loves.

“My parents had horses when I was born,” Franzen says. “I’ve literally been taking care of them since I could walk. I have had allergy problems my whole life, from itchy, watery eyes and runny nose to asthma symptoms that were a little scary.”

Like Lane, Franzen was tested for allergies as an adult and learned that she was allergic to nearly all flowering plants and domestic animals. She was given a series of allergy shots that took a little over a year.

Allergies can be maddening for people who want to spend time outdoors and around the animals they love. However, in most cases, they are manageable with a testing and treatment plan from your doctor.

“I still require daily medications and suffer asthma attacks,” Franzen says, “but I do have ponies in my life, so it’s worth it.”

What to Do If You Think You Have Horse Allergies

Allergy symptoms occur when your immune system perceives a substance to be hazardous and essentially treats it like it’s a germ or a virus. The most common symptoms of allergies are:

Allergies affect 30 percent of adults and 40 percent of children in the United States, according to the Asthma and Allergy Foundation of America.

Allergies to horses and other animals usually are caused by dander, the dead skin cells that animals continuously shed. Contrary to popular belief, horse hair itself is not an allergen, but dander collects on the hair and spreads that way, which is why horse allergy symptoms can increase during shedding season.

Besides horses themselves, people can have allergies to pollen, dust and mold, all of which may be found in and around barns and pastures.

If you think you have an allergy to your horse or something at the barn, check with your doctor to learn out how to get tested and for the best treatment options.

Leslie Potter is the web editor for Horse Illustrated magazine. She has a B.S. in Equestrian Science from William Woods University and has been a horse owner—and boarder—for more than 15 years.