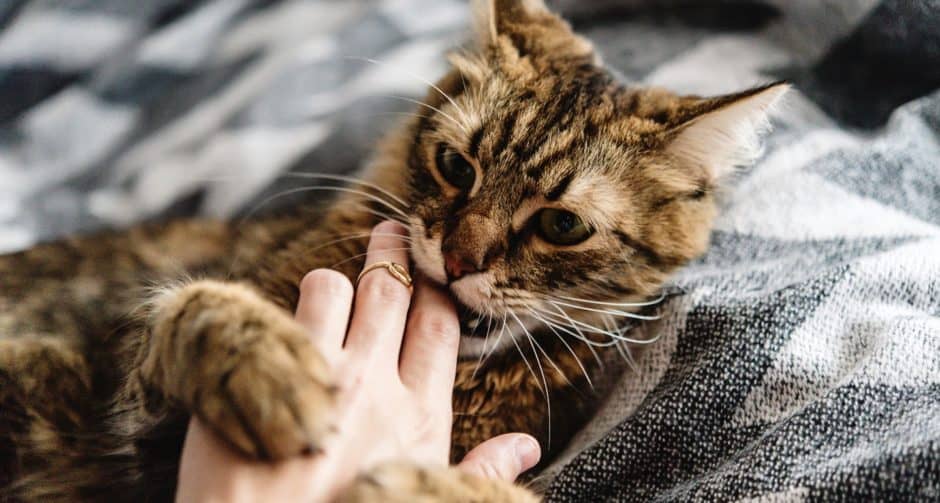 Cat love bites can hurt. If you’ve ever been bitten by a cat, you know exactly what I’m talking about! You’re sitting on the couch, giving your purring pal some pets, when all of the sudden, they decide they’re over it—and they flip around and bite your hand. Ouch! What does it mean when your cat bites you like this?

According to Robert Ellis, MD, writer for the American Academy of Family Physicians (AAFP), and assistant professor in the Department of Family and Community Medicine at the University of Cincinnati, Ohio, in a study done on dog and cat bites, cat bites account for 5 to 10 percent of animal bite wounds that are seen in emergency rooms. They occur most often in adult women, usually on the hands and feet, and almost all of these bites are self-reported as provoked.

If you’ve ever wondered why your cat bites you or how to stop a cat from biting, you’re in the right place. As a cat parent, it’s important to understand what’s causing the bad behavior and what you can do to prevent it. Below, we’ve outlined why cat biting happens, some advice to stop it from happening, and ways of treating cat bites.

Why Is My Cat Biting Me?

Cats will bite their humans for a number of reasons typically related to aggression, according to veterinary behaviorist Gary M. Landsberg, BSc, DVM, dipl. ACVB, North Toronto Veterinary Behaviour Specialty Clinic in Thornhill, Ontario, in his research on behavior problems in cats.

In the article, Dr. Landsberg explained that cats who bite during petting may not enjoy physical contact, and some cats bite to keep people from touching them while they are resting, sleeping or eating.

Sometimes, a cat will inflict a bite due to status-related aggression. According to a behavioral protocol from Belle Plain Animal Hospital in Minnesota, cats who have status-related aggression will try to manipulate their human and ultimately prevent them from exerting control. This will usually result in the cat exerting aggressive behaviors, like biting, in order to let their person know to leave them alone and that they are in charge. 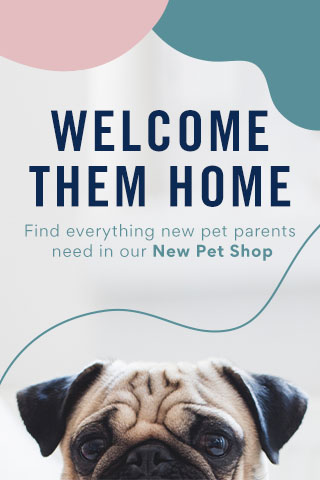 Adult cats may also bite if they’re not handled a lot as kittens, Dr. Landsberg explained. “Early exposure to people is essential for kittens to develop into friendly adults,” he said. “Lack of early handling can cause a cat to be aggressive toward people when they approach or attempt to handle the cat.”

“It’s predatory play, when the cat lies in wait for you and then pounces out,” she says. “But biting is something you should control in kittenhood. Even though the kitten only weighs a half a pound, don’t play fight with your hands because those teeth are sharp, and as they get older it’s going to hurt more and more. If they have learned that it’s OK to bite hands, they will continue into adulthood.”

How to Stop Cat Biting

Cats are strong-willed critters that can be difficult to train, but it’s not impossible to stop cats from biting. If your cat’s play biting is getting out of hand, here are some tactics to try:

As Dr. Houpt suggested above, it’s important to teach your kitten or young cat how to behave around humans. “The biting tends to begin in kittenhood,” she says. “Some veterinary clinics offer kitten kindergarten where you can take your cat to play with other cats and learn about how to mitigate behavior problems.”

A second tactic is to offer your cat a range of interactive toys that are OK to tackle, says Dr. Houpt. Because biting play is normal, let your cat do so—but not with your hand. “Try to make sure that you have enough predatory toys, that is, teaser toys or fishing poles with feathers at the end,” she says.

Another quit-your-biting training technique is to use something called negative punishment, notes Dr. Houpt. “It’s fine to let them play fight with a toy, but not with the hands,” she says. “If they start doing it, just try to hold still and then stop playing with them, so their punishment is five minutes of no attention. It’s what they call negative punishment, so it’s not going to make the cat afraid of you.”

If all else fails, make an appointment with your veterinarian and talk to them about other tactics you can use. Don’t let the problem reach a point of wanting to relinquish your furry little shark. “If you can’t live with the cat anymore, it’s certainly the time to see your veterinarian,” Dr. Houpt says. “But preferably a little before that, before it becomes a serious problem.”

Cat bites—or any animal bite, for that matter—are contaminated with all sorts of nasty bacteria that could lead to an infection if left untreated, notes Dr. Ellis.

If you’re wondering what to do if a cat bites you, the first thing to do is wash the wound thoroughly with water, saline or a dilute iodine solution under high pressure to ensure the bite is adequately cleaned. The AAFP recommends using 20 mL or larger syringe to irrigate the wound.

Next, check the wound for tendon or bone involvement and foreign bodies, such as teeth fragments. Cats often have periodontal disease, which increases the risk that a tooth will break off during a bite.

Because cat bites have an increased risk of infection, you should head to the emergency room or your closest acute care center for a professional check, as well as possible stitches, tetanus shot or antibiotic prescription. It’s better to be safe than sorry!

Whether you have a kitten, a young cat or an adult, you can teach them that biting is not allowed in your household. It’s important to properly train them, using techniques like time-outs and interactive toys, and be consistent with it. Also remember that sometimes, they may just want to be left alone—and that’s OK, too!