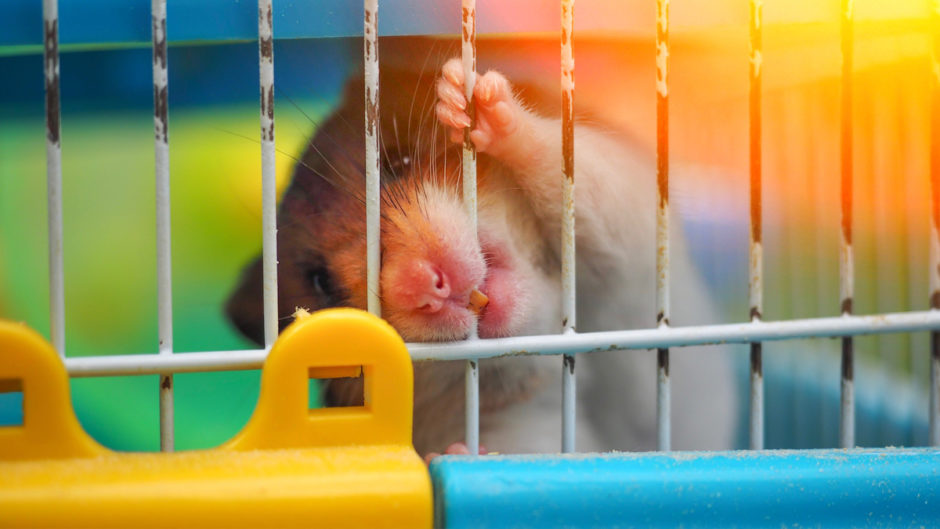 I have a female Syrian hamster that will not stop chewing on the side of her cage. I wanted to try an aquarium, but some health issues are caused from using an aquarium. I have tried everything. We have an apple tree in our back yard; I have cut branches off for my hamster to chew on, but she ignores them. She’s not very old, only 1. What can I do?

Bar-biting is very common with hamsters and rarely causes problems. If it’s not an acute behavior change, she’s probably enjoying the noise and the exercise. Typically it subsides within six months. But teeth break and mouths and noses can be rubbed raw, so it’s a good idea to encourage safer alternatives.

You mentioned your concern about health issues caused by using an aquarium. If you’re following a standard weekly cleaning schedule and picking out any uneaten fresh food each day, a tank with a secure wire mesh lid can be an ideal home for a hamster. A 10-gallon tank for a hamster is roughly equivalent to a 200-square-foot room for a person with an essentially open ceiling. Aquarium tanks can be very effective at blocking drafts and scents from other hamsters or pets. Various cages have their benefits but don’t rule out an aquarium entirely. It might be the right answer for you and your hamster.

Biting the bars doesn’t mean your hamster isn’t happy in her home. For some hamsters, it’s just a favorite pastime. It can simply be an expression of youthful energy. Some chew them in their sleep, or dash to their cages during playtime and try chewing their way in. It’s not just an attempt to get out. They like it!

Apple branches are a great idea. She might be more interested in them if you rub a little flavor on it to get her started. Carrot or apple work well, or a very thin smudge of peanut butter.

A substitute can be wedged between the bars at her favorite chewing spot. A lab block, hamster-safe dog biscuit (should not contain garlic), tightly rolled cardboard, apple branch or a Popsicle stick work well, especially if they’re anchored tightly. Hamsters often focus intently on challenge. Just be sure not to spread the bars far enough to facilitate an escape.

A stainless-steel teaspoon in the cage works for hamsters that have learned to like chewing metal.

Unsalted nuts in the shell can be helpful. Peanuts are favorites. She might be more interested in a hard-shelled nut like a hazelnut if you help her along with a tiny crack the first time or two, so she knows there’s a prize inside.

A hard roll crust that’s sat in a warm oven till it’s even harder is a real treat to avid chewers.

Some hamsters chew their bars on hamster cages because it’s gotten them attention and playtime. Withholding attention until the hamster is quiet, then scooping her up for cuddles and play may help quickly if that’s the case.

Hamsters that never bit their bars may pick up the habit immediately when moved near a bar-biting hamster. If you acquire another hamster before your girl breaks the habit, be aware this can be a learned behavior.

If all else fails and an aquarium isn’t a possibility, take heart that injuries from bar-biting aren’t common. Check her teeth and the skin around her mouth and nose regularly, and remind yourself that most hamsters slow down on this behavior over time.