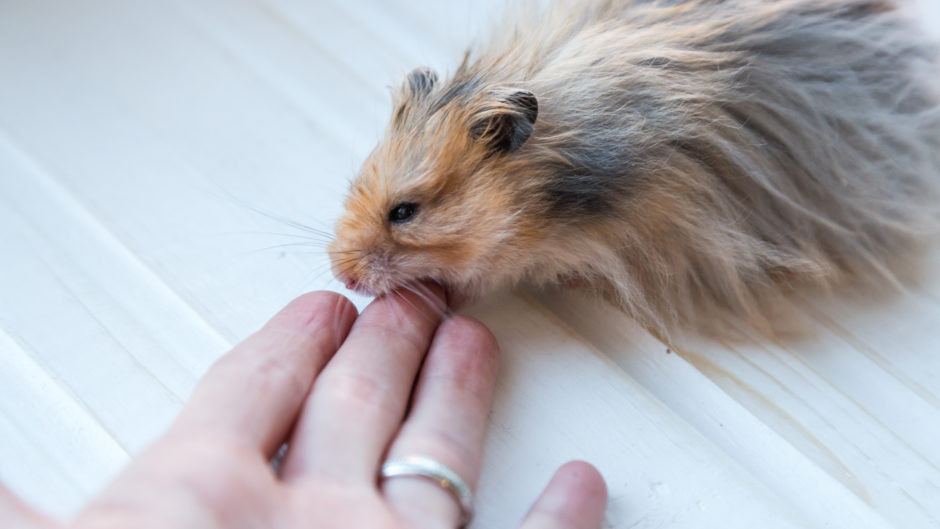 My hamster keeps biting me for no reason. My brother gave him to me because my brother didn’t want him anymore. When he began to bite me, I started to put on gloves because I looked up online how to have a hamster not to bite and it said to use gloves because it might be your scent. All of the sudden he started biting me with the gloves on and they were clean. Also I was holding him correctly. How do I get my hamster to stop biting me? Please help. I’ve tried everything!

You didn’t specify whether your hamster is a dwarf or Syrian, and that does make some difference. Dwarves are slightly more inclined to bite than Syrians, at least at first, perhaps because they are simply smaller and more defenseless than the heftier, faster Syrian. There’s more about the specific behavior of dwarf variety hamsters further on. But what you need to know is that hamsters don’t have to be biters. You can help them break the habit.

It’s important to understand that biting doesn’t necessarily mean your hamster is aggressive. The fact is, the hamster’s jaw is much stronger and more dexterous than his short, rather weak and uncoordinated forepaws. A hamster can build an entire home with that jaw! So if something is in a hamster’s way, or just looks like it might be bothersome for some reason, it is more likely he will grab it and move it aside with his jaws than with his paws. It comes down to physique.

Beyond that, habit takes over. The hamster may have learned to see human interference as some sort of obstacle or hassle, and responds immediately by, very effectively, “making it go away” using his teeth. Putting on a glove is of no help because, frankly, glove and skin are the same thing to a hamster, but gloves may seem more frightening. The hamster won’t learn anything from the presence of a glove.

Scent is, indeed, something any hamster is acutely aware of, but it’s only likely to lead to a bite if you smell like food, or perhaps another hamster. That’s why it’s critically important to always wash your hands with scent-free soap before handling a hamster. At the same time, you actually want your hamster to recognize your ordinary, natural “people scent,” because you want him to know you won’t hurt him and that he need not be concerned for his safety.

Let your hamster get used to your scent. Artem Sapegin/Hemera/Thinkstock

So what you’ve got to do is get your hamster used to that scent, and to being around you. It’ll take five to fifteen minutes per session, and you’ve got to practice this at least once a day until you break the biting cycle: Put your hamster on a big, flat surface. A bed or couch is perfect for this because it bears your scent strongly (hamsters are extremely sensitive to smells—their olfactory sense is far, far stronger than any other). Let the hamster wander freely, but every now and then block his movement with the back of your hand. There are two reasons for this. First, hamsters instinctively dread being grabbed. They’ve got an inborn image of teeth and talons, and our fingers are not that greatly different. Second, you don’t want to give your hamster any kind of “edge” to pick at. The back of your hand or your wrist are a large, broad, flat-ish surface. There’s nothing to grab onto, and nothing to bite, and there’s nothing to suggest to your hamster he’s going to be grabbed.

If the hamster seems a little inclined to bite, very gently, calmly, and softly blow in the direction of his face. He won’t especially like this, but if you do it gently he won’t take it too hard, and it’ll distract him from any biting impulse. It’s a gentle method of discipline that really works. (Never be aggressive or forceful with a hamster—never yell, and never, ever strike a hamster. They don’t “get” that they did anything wrong, and they just think you’re trying to attack. That’s the surest way to make them respond aggressively.)

Patience is the key to this technique, and eventually you should be able to sit on the couch or bed with your hamster and have him travel around and over you out of sheer curiosity and playfulness, with no impulse to bite or react to you in any particular way.

Of course, you may be having trouble simply removing your hamster from his home to put him on the bed. A number of techniques can help, but one simple tool that you may find does the trick is a “scoop” made out of a 2 liter soft drink bottle. Remove the label, wash the bottle, and trim off the bottom so that it is mostly an open scoop shape. It may take several tries to get the shape just right. The cut plastic can have sharp edges, so cut it along round lines to eliminate sharp corners. There’s no need to sand or treat the edges, but do exercise caution when using it. When you hold your hand beneath this “scoop” the plastic quickly warms to the touch. When you place it before your hamster he will see your hand, feel its warmth, but there will be no direct contact, and no edges (fingers) to pick at. Don’t attempt to literally scoop the hamster, but hold your hand and the scoop still, beneath and in front of the pet. Curiosity will likely bring the hamster inside it in short order. You can hold him in this scoop for some time to acclimate him to being held without consequence.

As mentioned previously, dwarf hamsters have particular behavioral tendencies that are worth noting. Even more than typical Syrians they can be extremely territorial about their habitat. Extending a scoop of some kind instead of hands to lift them out may be all it takes to restore their sense of order in the world. The most territorial of dwarf hamsters charge the cage bars or door when you approach, or dart to attack hands reaching in. For these hamsters, their stress can be greatly lessened by keeping your hands out of their homes while the hamster is in it.

Of course it’s important to remember to be sensitive to any hamster’s overall sense of well-being. Never “sneak up” on him. Always show your hand to him from the front, while speaking to him gently. Let him awaken fully before trying to hold him, and don’t disturb him when he’s eating, or fixing his nest. Hamsters are naturally curious. Let that work to your advantage. And again, we cannot emphasize this enough: Patience, patience, patience. It will take a while for your hamster to “unlearn” biting behavior, but once it happens, you need never worry about it again. Good luck!