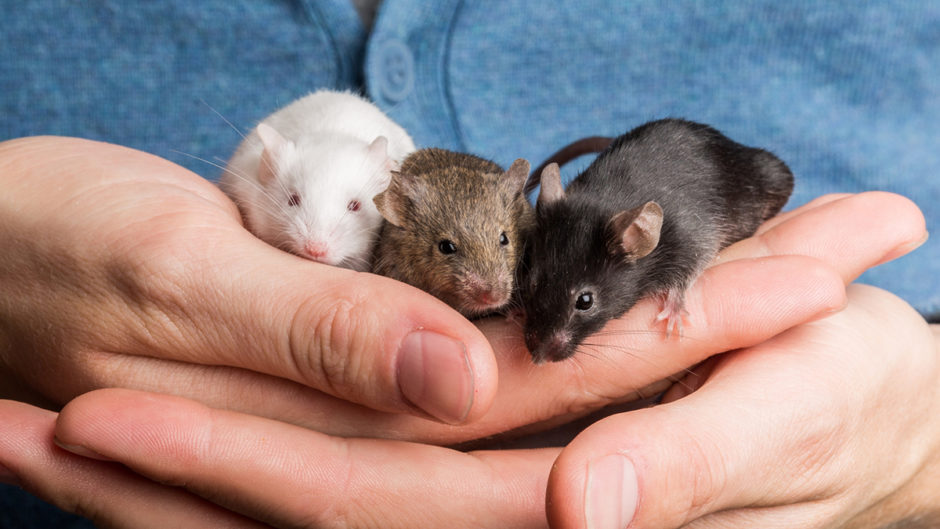 In nature, wild house mice (Mus musculus) live in colonies. These colonies typically consist of one male and several females.

“This species can be found in barns, houses, fields, woods, basically everywhere,” says Josh Wyss, president of the Fancy Mouse Breeders’ Association and owner of Just Wright Exotics in Toledo, Ohio. “They are usually found in groups that can greatly vary in number from a few to massive amounts. Often, if a nest is found somewhere, there are multiple other nests close by.”

Wild males typically establish a territory around their nesting site and will defend this territory from other males. Females, on the other hand, live together comfortably.

Our sweet domesticated mice, also called Fancy mice, are the same species as the wild house mice, thus their social structure essentially is the same. Males, or bucks, need their own space to prevent fights that can end in injury or death, Wyss says. Females, or does, typically live together amiably.

How Many Mice Can Live Together?

When deciding how many mice to house together, it depends on the gender of your mice, the enclosure itself and your goals. The general recommendation is for males to live alone and for females to live in groups of two or more.

“A typical 10-gallon tank can hold about four mice,” says Trilainna Stanton, owner of Frosted Cookie Mousery & Farm in San Diego, California. “Approximately four mice can be added for each additional 10 gallons in a standard tank.”

For a single buck, Wyss recommends a 5-gallon tank.

“They don’t need to be with a ‘friend,’ and they aren’t unhealthy or unhappy if they aren’t,” Wyss says. “Placing bucks together is asking for a dead or injured mouse. When adult bucks get along this is the exception, not the rule. Don’t try it.”

He adds that floor space is important when considering enclosure size because even though mice can climb, they typically do not.

If you plan to breed your mice, a ratio of one male to no more than three females is typical, Wyss says. Otherwise, never house unaltered males and females together.

“If I do plan on breeding a buck, I will introduce a single doe to his cage,” Stanton says. “Once she is bred, I move her to a larger breeding cage to have her pups. Some people have colony breeding setups, so typically 2-4 does housed with one buck. In those cases, typically no animals are removed from the setup, and there is usually a constant supply of pups being born.”

She adds that once male pups reach “5 weeks of age, they tend to start fighting and can kill or seriously harm each other.” Protect your pets by putting the males in their own enclosures before that can happen.

Tanks are common enclosures for pet mice. Because of this, Wyss says tank height is important.

“Ammonia is a byproduct of mice, and it’s heavier than air,” he explains. “A10-gallon tank is only 12 inches tall, [which is] sufficient for air circulation to occur. Larger tanks, like a 55 gallon for example, have larger floor space but are significantly taller as well. Ammonia can settle in a tank without proper circulation and cause respiratory issues in the mice. [Therefore,]12 inches high is a safe max height of a solid-sided enclosure (without additional ventilation added).”

Stanton also stressed the risk of mice developing upper respiratory infections easily in a dirty cage or enclosure that is not well ventilated. She recommends adequately cleaning their enclosure, including toys and houses, at least once a week and making sure there is plenty of ventilation.

“They should always have lots of ventilation, [such as] a tank with a screen lid, a lab cage with a wire lid or a bin cage with large mesh windows,” she says.

A wire cage like Ware Chew Proof cage provides plenty of ventilation for your pet mice. It also is designed to detach easily for simple cleanup.

“Mice like small cozy spaces and tend to feel most secure when they can build nests and hide,” she says. “A larger cage can cause stress, which can lead to increased aggression, anxiety, and potential loss of pups.”

Be sure to spend individual time with each of your mice if you want them all to be tame. Some will be shy and need more coaxing. Be patient with these more timid mice so you will be able to easily handle all your small pets.