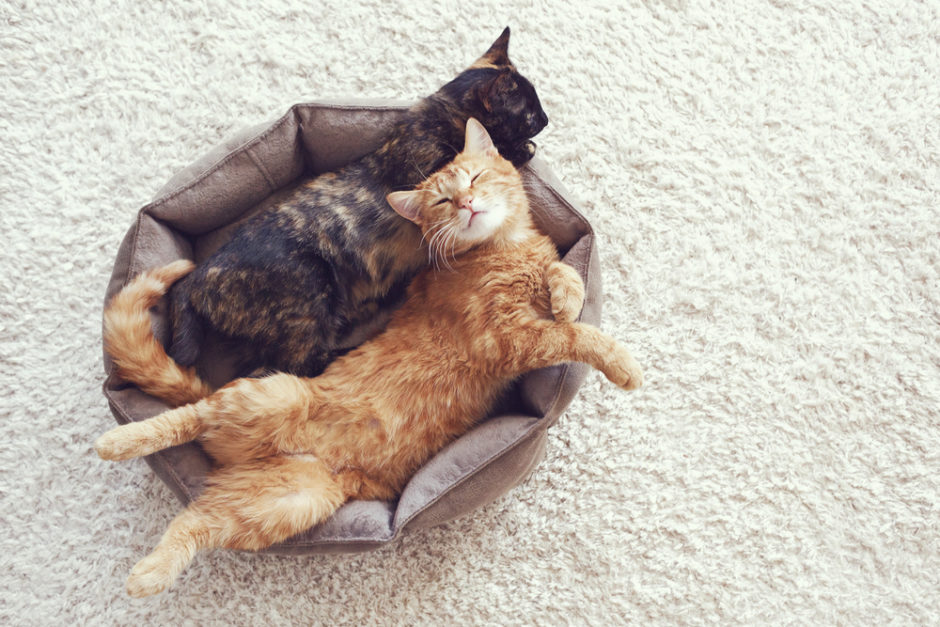 Growing up in rural Idaho when spaying and neutering barn cats was unheard of, I received one of the most visible, and vocal, “birds and bees” lessons. My earliest cat sex education came courtesy of the barn cats that were mating under my bedroom window.

Duke was a big, black, longhaired tom cat who lived in the shadows of our farm. His mistress that night was Punkin, an orange tabby barn cat.

Looking and sounding more like a brawl than mating – with fur flying, vocal cords stretched like piano wires and teeth clamping – the actual copulation took only a few seconds. The courtship between Duke and Punkin was certainly more leisurely, taking place in a complex ballet of behavior that lasted a few hours.

When it comes to cat sex, the male tom and female queen are romantically different. While the tom’s mating-motor is always revving, the queen only ovulates when in season. In nature, females come into season during the winter solstice, as daylight and temperatures increase, giving birth 60 to 65 days later when food is most abundant. In controlled cat colonies, with 14 hours of light, 10 hours of darkness and constant temperatures, female cats will breed year-round.

The queen is able to bear young as early as 7 months of age and is fertile until 7 to 9 years of age. She will go into heat multiple times during the breeding season from January or February to October or November.

What makes cats unique among companion animals is that once in season, or heat, they are induced to release eggs from the ovary by the physical act of mating. This is called reflex ovulation and is nature’s way of making sure that sperm and egg are most likely to meet. This is also why queens stay in heat (estrus) for 2 to 19 days.

To survive in nature, it is necessary for cats to mate multiple times by the same or different partners. In fact, studies show that cats that copulate once get pregnant only 50 percent of the time.

The interval between the end of one heat cycle and the beginning of the next is typically every seven days, but can be anywhere from two days to three weeks. Susan Little, DVM, board-certified feline practitioner who practices at Bytown Cat Hospital in Ottawa, Canada, says that the length of the interval depends on the cat breed, season, social dynamics and whether or not an intact (non-neutered) male is present.

The frequency of a cat’s heat cycle is also complicated by pseudopregnancy and “silent estrus.” If a queen ovulates during a cycle, but does not conceive, she will have a pseudopregnancy lasting 35 to 45 days. This can look like infrequent cycling. With silent estrus, queens have all the normal hormonal events of estrus, but show no behavior indicative of being in heat. This typically happens to shy queens who are dominated by prevailing queens in a home, or to a queen housed alone with no exposure to an intact male.

About 20 percent of queens have a pre-heat, during which they make shrill, discordant caterwauling noises, rub up against anything and everything, roll, tread in place or claw themselves forward on the carpet while dragging slightly elevated hindquarters. Cat owners often mistake these antics for an indication of extreme pain. However, this feline break-dance is simply a way to attract a partner.

When a queen needs to attract a tom from a distance, she puts up the olfactory equivalent of billboard advertising, which might land on your cat supplies. The female cat has scents called pheromones in her urine that indicate to suitors her fertility and location.

Toms reach puberty at about 6 months of age and fertility can last 14 years or more. You can identify an intact male cat by his thick neck and fleshy cheek jowls, which make him look like a prize fighter. His thick skin and muscles help him win battles with rival males.

The most important part of a tom’s sexual anatomy is not easily visible. His serrated penis, which stimulates the lining of the queen’s vaginal vault, triggers a reflex that releases eggs from her ovary for fertilization.

Even if a tom smells the queen’s urinary scent, hears her flirtatious voice and catches sight of her coquettish dance, he still approaches with the caution of a 7th-grade boy at a Sadie Hawkin’s dance, and only mounts her after she approaches him. Although the stalking courtship may take hours, mating lasts from 1 to 4 minutes and actual penetration and ejaculation only takes a few seconds.

During copulation, the queen will scream and attempt to break free by turning and rolling like an alligator with dinner in its mouth, or strike at the tom with her claws. In what looks like a judo move, the tom grasps her by the neck with his teeth to prevent her from biting him.

After the breeding is complete, the tom runs off and the queen has what is called an “after reaction,” where she’ll roll or thrash around like a fish out of water and she cleans herself. This reaction may last up to 10 minutes.

The queen is typically ready to mate again in as little as five minutes or up to 30 minutes, and may allow up to 30 matings in a heat cycle with multiple toms. This increases the genetic diversity of the offspring. A single litter could produce offspring from a variety of fathers, but each individual kitten has only one father.

A pregnant queen remains physically active from conception to birth, a period of about two months. An experienced person can tell if a cat is pregnant by what feels like a string of pearls in the abdomen, starting at about day 16 of pregnancy. Some queens’ nipples will enlarge and turn pink as early as day 18 of pregnancy. A veterinarian can use ultrasound to check the development and heart rate of the fetuses from day 26 to birth.

As birth approaches, the female retires to a secluded “birthing den,” where she can give birth quietly and efficiently. For a mama cat, the operative word is “shhhh,” as it’s important in the wild to stay quiet and not alert predators. After giving birth, the queen eats all the evidence of the birth – the placenta, the kittens’ urine and feces – in order to hide the evidence of the new family.

If you’re a kitten, forget about crying out for daddy. For one, tom cats usually don’t participate in the parental care of the young. Also, in natural cat colonies, toms sometimes kill newborn kittens, but the females cooperate to protect the litter, even when it’s not their own. Call it a feline neighborhood watch.