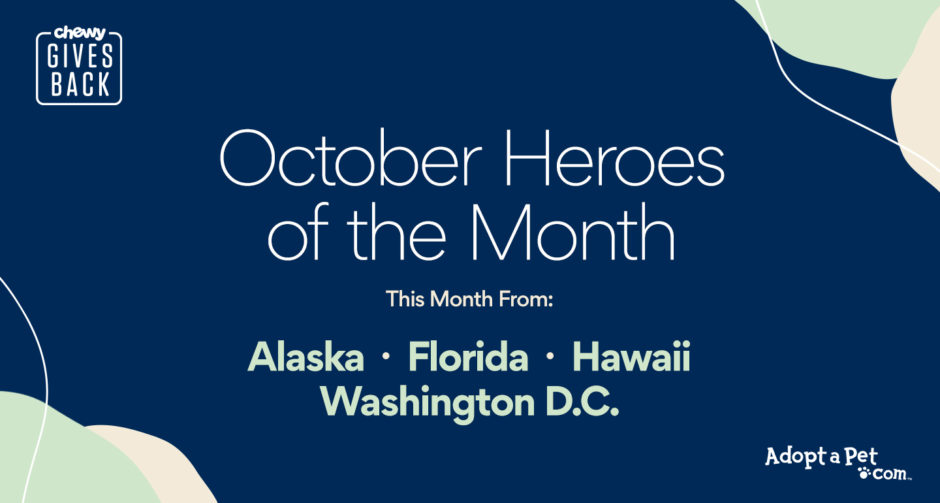 When you see a feral cat who needs help, who do you call? If you’re in Washington, D.C., Charlotte Fox is your girl, helping to control cat populations throughout the capital.

Could you handle caring for a cat in their final months, knowing you’ll soon have to say a final goodbye? What about a hundred more? It takes a strong will and loving heart—and Debbie Sis has both.

These are just a few of the inspiring pet lovers we’re recognizing this month as part of our of Heroes of the Month series, in partnership with Adopt-a-Pet.com. This month, in celebration of National Cat Day on October 29, we’re celebrating heroes devoted to caring for our feline friends, including a sanctuary director helping homeless cats on a quiet tropical island, a cat cafe owner who pairs people with cats who match their personality, and more. 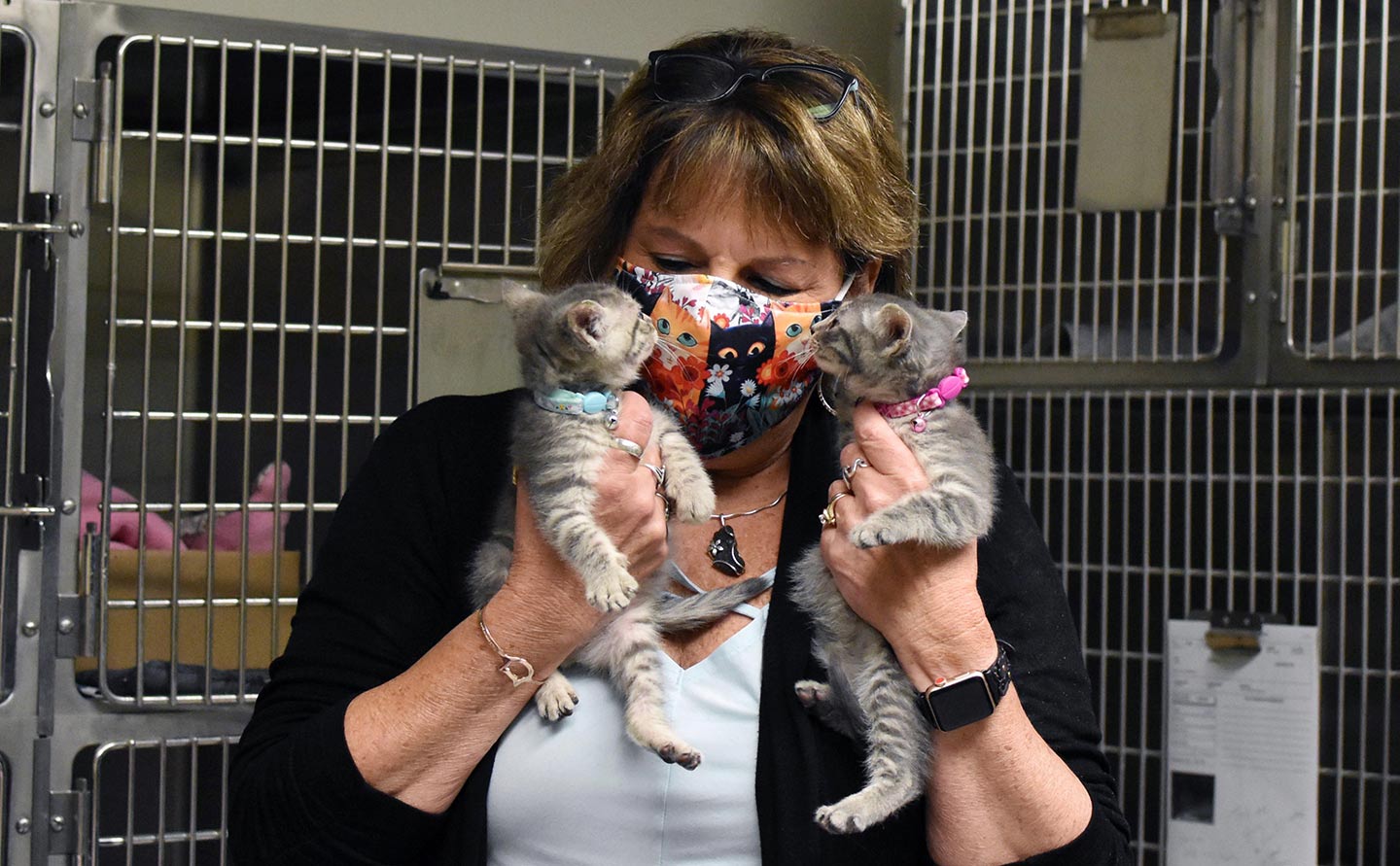 Alaska: Debbie Sis, a Final Friend for Cats in Need

When Debbie Sis fostered her first kittens, she had no idea that caring for the most sick and neglected cats would become one of her life’s greatest missions. Today, she says, fostering is “a life-changing passion.” Sis is the person Anchorage Animal Care and Control calls when they need someone to foster medically at-risk rescue cats. She’s fostered over 1,000 cats—too many to count, she says—and has housed as many as 14 cats at once at her home in Alaska.

Sis has been a hospice volunteer for the past 45 years, so she’s used to being a companion for people at the end of their lives. “In my hospice work, I ended up focusing on the homeless and the poor, those who don’t have emotional or physical support,” she says. That’s given her the emotional resilience to take on the toughest cat cases. Though she started out fostering kittens, Sis says, she soon realized her true calling was caring for cats with health issues, often near the end of their lives. “I really, really love the challenging ones that have been neglected. It’s a lot of work, but it’s so fulfilling.”

When possible, Sis nurses the neglected cats back to health. Other times, she offers them comfort and companionship before they pass. The most serious cases require around-the-clock care, which would be exhausting for most people—but not Sis.

“I love them fully and then let go,” she says. “I don’t carry the grief; I don’t let it drain me because otherwise I wouldn’t be able to do the work.”

Find out how to support Archorage Animal Care and Control here. 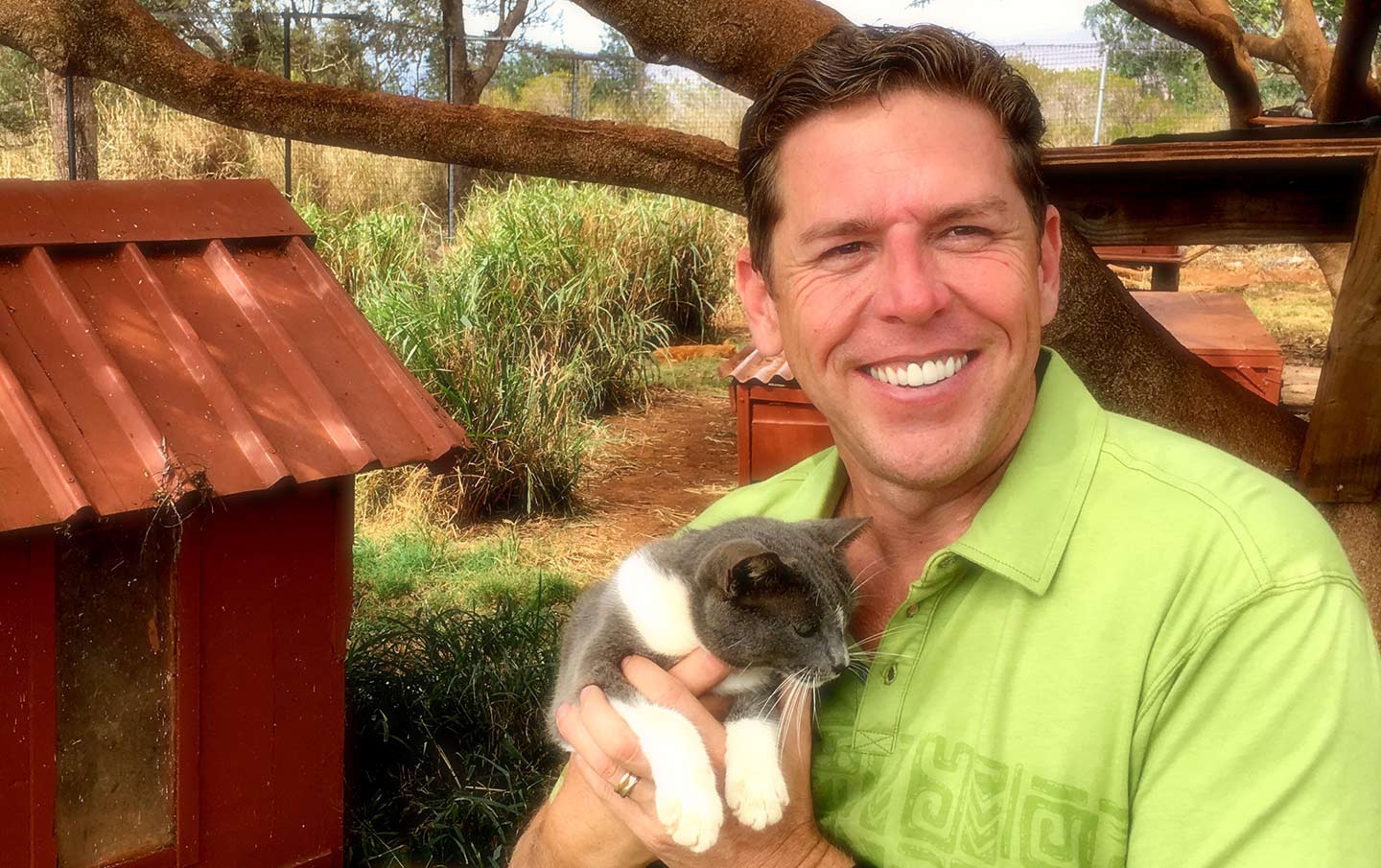 Hawaii:  Keoni Vaughn, a Savior for Island Cats and Birds

With a population of about 3,000, no traffic lights and one gas station, the Hawaiian island of Lanai was once home to a small community with a big problem: hundreds of homeless and unwanted cats. That’s when Keoni Vaughn stepped in.

“If there was ever an area where we could potentially solve the cat population issue, Lanai was going to be the place,” he says.

Vaughn became executive director of Lanai Cat Sanctuary in 2014. Born and raised on the island of Oahu, he has worked in animal welfare for nearly 20 years. He started by picking up strays and conducting cruelty and hoarding investigations with the Hawaiian Humane Society, working his way up to chief investigator and then director of operations and vice president of the organization.

But he was drawn to the unique challenge of rescuing cats from ecologically sensitive areas on Lanai. Founded by Kathy Carroll, the sanctuary strives to meet two critical needs: a shelter for homeless cats, and protection for the island’s native and endangered ground-nesting birds, some of which lay only one egg a year.

“It was critical, in the founding of the cat sanctuary, to remove these cats that were predating on these birds, and relocate the cats to a safe location where they can live out their lives,” Vaughn says.

As director, he’s overseen the delivery of quality care for cats with medical needs by regularly flying in veterinarians from Oahu and, occasionally, from the U.S. mainland as well. Most of the sanctuary’s 680 cats will stay on site for the rest of their lives, though 35 to 50 are adopted off the island each year.

“When I first started, there were quite a few cats in the town area where everyone lives,” he says. “Now, you don’t see any, so we definitely feel like we’re making a difference.”

Find out how to support the Lanai Cat Sanctuary here. 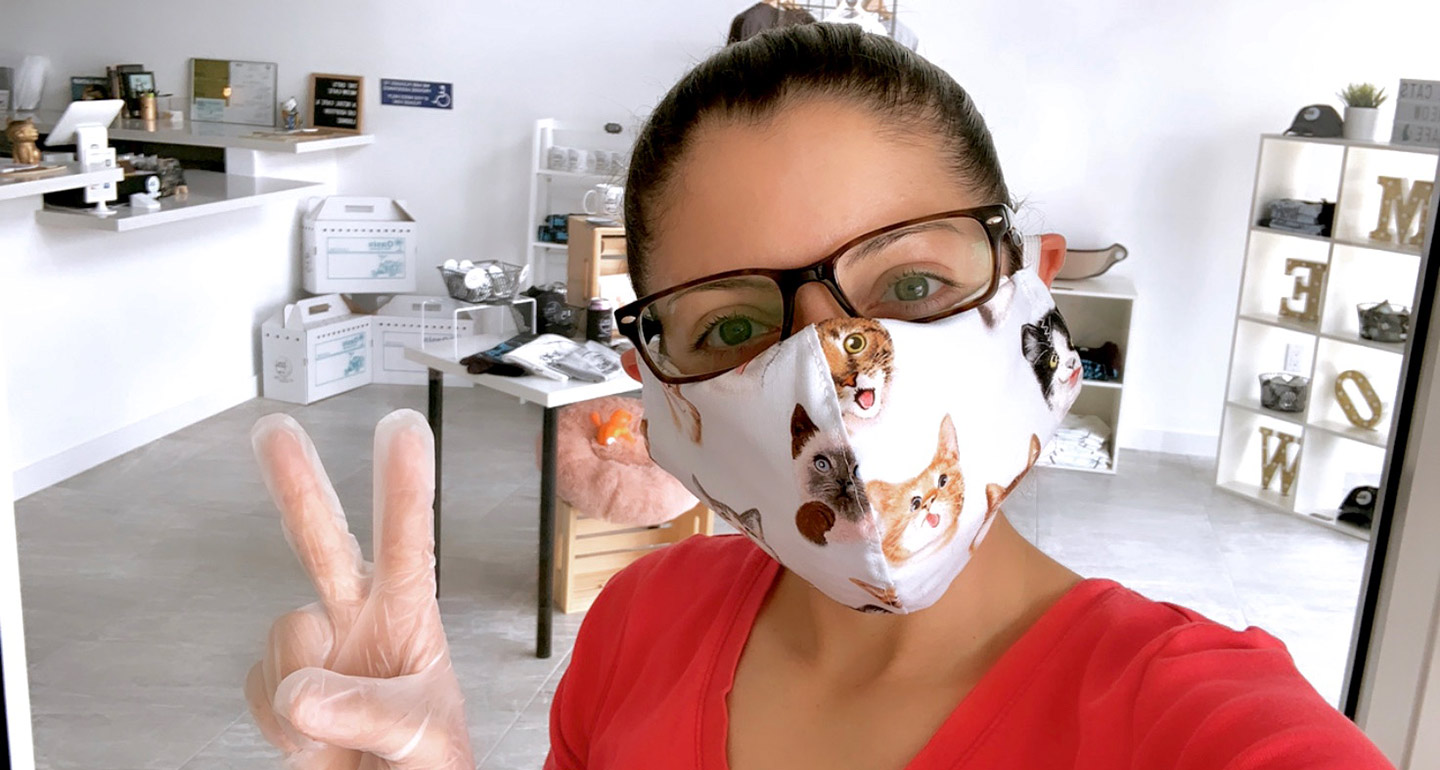 If you’re a coffee lover, you know that nothing goes better with a strong brew than a purring cat in your lap. With The Cat’s Meow Café, Elizabeth Gallardo is using that perfect pairing to find forever homes for shelter cats in Miami, Florida. Opened in March of this year, her cafe has already facilitated the adoptions of 111 formerly homeless cats.

Gallardo grew up around rescue cats, she says, and has long been involved in volunteering, fostering and trap-neuter-return (TNR) efforts in Miami. She’d noticed that most animal shelters, with their cages and utilitarian design, weren’t ideal environments for bonding with a potential feline family member.

With The Cat’s Meow, she says, she aimed to create an alternative: a comfortable, relaxed space where people can mingle with the cats, rather than peering at them through a cage at a shelter.

“We emphasize connecting with the cat, especially if it’s a kitten, because then it can be a 20-plus-year-commitment,” Gallardo says.”

The Cat’s Meow is half retail and snack bar, and half cat-adoption lounge. All of the cats are rescued by Miami-Dade Animal Services and have been spayed or neutered, vaccinated and microchipped.

The goal, she says, is for customers to meet the kitty of their dreams. Gallardo and her staff even try to pair people with cats who match their personality and lifestyle. In the meantime, the cats benefit from the attention of the café’s visitors, who provide healthy socialization.

For Gallardo, it’s a joy see so many human-cat relationships get started on the right foot.

“It’s an experience that allows you to bond with a cat,” she says. “You can just relax and enjoy the space, and find a cat that you feel connected to.”

Find out how to support the Cat’s Meow Cafe here. 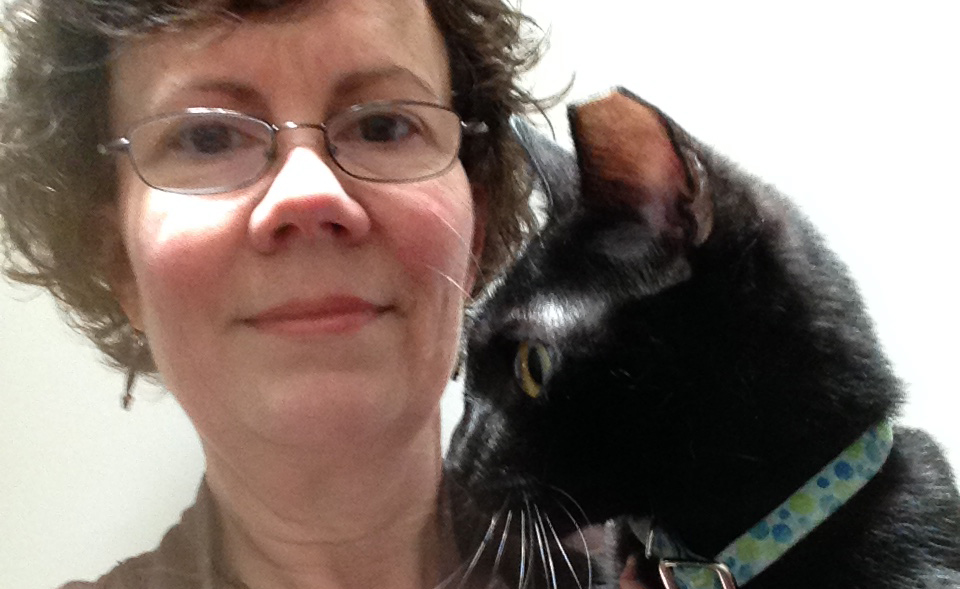 It’s always been in Charlotte Fox’s nature to help homeless cats—in fact, she began rescuing them when she was a child. Today, trap-neuter-return (TNR) efforts, which help to control homeless cat populations, have become her lifelong mission. For the past 25 years, she’s brought thousands of cats to veterinarians for spaying or neutering, an effort that’s prevented the suffering of countless homeless cats on the streets of Washington, D.C..

“It started with the friendly ones outside,” she says of her childhood rescues. “You see a friendly one, and you think, ‘I could find it a home or bring it home.’”

But over time, experience taught her that not all cats are meant to be “owned.”

“I learned more about cats living outside that are not friendly with people, that have lived outside their whole lives,” she says. “That’s a whole different situation because you can’t just bring them inside.”

Instead, Fox found another solution: In 1999, she started taking feral cats to the Humane Rescue Alliance and paying for spaying or neutering out of her own pocket. Now, Fox is the field coordinator for the group’s CatNiPP, a program that addresses the needs of the D.C. area’s unowned community cats and people who care for them. She works with animal control officers and volunteers who bring feral cats in for surgery.

Over the decades, she’s helped TNR thousands of cats—too many to count, she says—who would have otherwise contributed to overpopulation. And she still remembers what it was like to find community cats as a child, a memory that has proven useful in the field.

“All you have to do is ask one kid where the cats are, and you’ll find 100 of them,” she says. “They will lead you around by hand and point out every cat or kitten in the neighborhood.”

Find out how to support the Humane Rescue Alliance here.

Check in with Pet Central next month to learn about more shelter pet heroes across the U.S. Looking for more inspiring stories? Read about heroes from Arizona, California, Georgia, Illinois, Indiana and Kansas.

By: Howard Hardee
Howard Hardee is a writer and reporter based in Madison, Wisconsin. Raised in Fairbanks, Alaska, he loves all of earth’s creatures (all 35 species of Alaskan mosquito notwithstanding), and at 31 years old is still mourning the loss of his childhood dog, a small, white terrier mix named Pete.