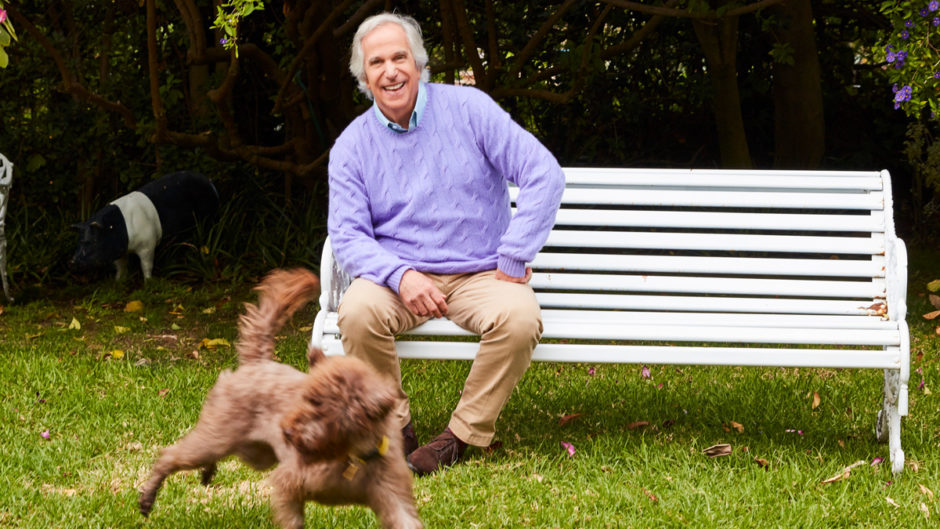 Fans know Henry Winkler best from his iconic character “The Fonz” from the popular 70s and 80s sitcom “Happy Days.” But his dogs see him in a completely different role—actually, a few different roles. In their world, Winkler is a go-to playmate, designated poop picker-upper and their own personal executive chef who keeps their bowls filled to accommodate their dietary requests.

Winkler, who has been a dog lover all his life, currently lives with his two pups, Sadie and Linus. But he jokes that he’s typically the kennel of choice for the other pups in his family, and at any given time, he and his wife, Stacey Weitzman, might be housing up to five pooches at once!

Pet Central caught up with Henry Winkler, who stars in HBO’s new dark comedy “Barry,” to discuss life with his rotating menagerie of pups, his favorite way to keep them entertained, and which of his furry friends has eaten one of his acting contracts.

Tell us about your canine clan.

We have Sadie, and she is just a heart stealer. She has the energy of 7 dogs and is a relentless ball player. She’s a 1-year-old Labradoodle, chocolate brown and she is a mini. I wasn’t exactly sure I was getting a mini, but here she is.

Eleven years ago, my wife found a baby Labrador, who was 4 months old, in a parking structure. We took him to the pound, and they said if no one claimed him in a week, we could claim him.

We brought him home, and then he grew into a Great Dane. He’s a mix … he is part Lab, part Great Dane. His name is Linus.

Those are my two.

Then my son Max was off directing his third movie, and we took care of his idiosyncratic three-legged German Shepard, Hamlet. If you are not in his pack, it gets a little dicey, so when people come over we have to move him from room to room.

There is my daughter’s dog, Scruffy, who we watch when they go on vacation. He is a Goldendoodle.

And there is Ringo, our oldest son’s family’s French Bulldog. He comes over so then we have 5 dogs.

Have you always been a dog lover?

I’ve always been a dog lover! I had an Irish Setter when I was 8. Her name was Dervin, and she was beautiful. My mother didn’t like dogs so she told me that Dervin went to a farm where she had more room to run. I got over that like last Thursday (laughs).

What is life like with all these pups at the Winkler home?

Do they come to the set with you?

My dogs would create havoc. I miss them so much when I travel for work. I really do.

Fun Fact: The prop man on Wes Anderson’s film, “The French Dispatch,” which I just finished filming, has a longhair Dachshund set dog. That dog is impeccable.

What do you like to do together with your pups?

I play daily soccer games with Sadie. We have figured out a game of soccer where I kick a ball and she stops it from going through the doorway. This happens multiple times a day. She is relentless!

Or I throw the ball in the yard and she runs and retrieves it. Sometimes [she] drops it too far away from me and we have a chat about bringing it closer.

Is there a troublemaker in the bunch?

Sadie is a thief. She has 6 million [dog] toys of every variety, but whatever is on a reachable countertop, a desk, it is all of a sudden hers.

And I have learned that all training goes out the window when you say, “Come here. Let me see. Give it to me.” And then you spend most of your time chasing her up and down the stairs, so now I say to her “Come on. I’ll trade you. Come on.”

She will come, drop the thing, and I will give her a freeze-dried turkey heart. That’s the magical treat. So, we have negotiations, and she understands “I’ll trade you,” and it works really well.

What is the craziest thing Sadie ever stole off a table?

Oh my gosh, Sadie has destroyed … an acting]contract I just signed that I put down on my desk in order to send it in. I had to tape it back together and send it in with Scotch tape. My dog ate my contract!

Well, they do. Children and puppies and work do that. The combination of all of that is pretty wonderful!