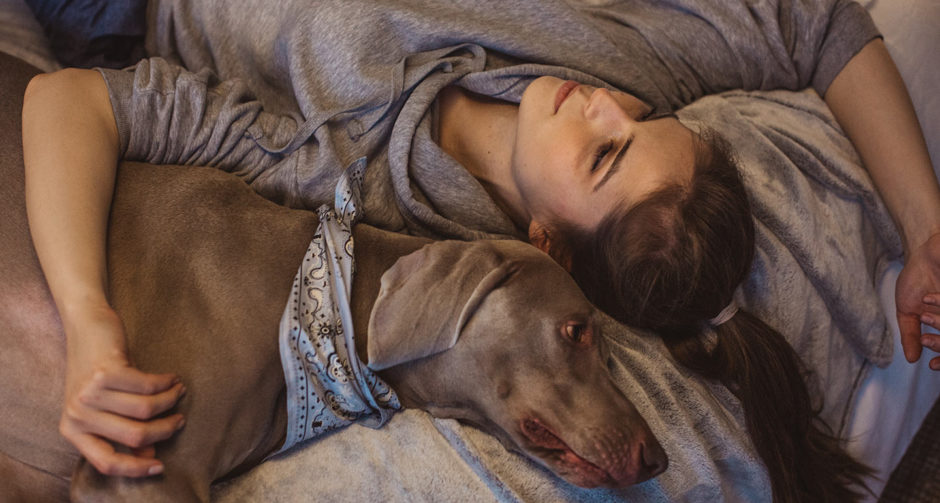 Have you discovered that when it comes to bedtime, you’re far more dog-tired than your dog? If your old dog won’t sleep at night, it may be indicative of some underlying health problems.

The good news is that there are solutions that can help some senior dogs get the rest they need.

“All dogs, but especially senior dogs who experience a change in sleep behavior, specifically waking up at night, should be examined by their veterinarian sooner rather than later,” says Janet Tobiassen Crosby, DVM. “I would check in with your vet after a night or two of disrupted sleep, depending on how upset your dog is and other signs seen.”

Why an Old Dog Won’t Sleep at Night

“Sleep disruptions can be from a variety of causes, often medical in nature,” Dr. Crosby says. “Causes range from gastrointestinal trouble to urinary system infection to early stages of dementia.”

Dementia as a Cause of Dog Insomnia

“Just like people, as dogs get older there is an increasing frequency [of dementia],” Dr. Dodman says. “If a dog makes it to 18 or 19, there’s a greater chance they have it. One of the cardinal signs is not sleeping at night.”

Because there’s no test for CCD, diagnosis can be tricky. Essentially, it’s a diagnosis of exclusion when other causes have been ruled out, Dr. Dodman says.

A trip to your veterinarian can help determine cause of your dog’s insomnia, and rule out others. This is often accomplished through performing a physical examination, blood work and a urinalysis, Dr. Crosby says. After those tests have been completed, your vet may recommend more extensive testing.

“You don’t do a bone scan or MRI willy nilly—only after standard tests have been done,” Dr. Dodman says.

Symptoms of canine Alzheimer’s, or senility, that affect sleep include restlessness, disorientation and confusion. And there may be indicators during the day, too, including reduced appetite, weight loss and lack of energy. If a dog does have CCD, pet parents can improve their dog’s quality of life with diet, medication, supplements, and cognitive enrichments. Unfortunately, there is no cure to CCD, which is one of the parallels to human Alzheimer’s.

Pain as a Cause of Dog Insomnia

Another possible reason for why a senior dog is restless at night is pain, especially cancer, which Dr. Dodman says is the most common cause of death in older dogs.

And if a dog is in pain, that pain can be worse at night because there are no distractions, Dr. Dodman says.

Pain primarily presents as the senior dog having anxiety at night, so look for the same signs as fear, which include raised hackles—that is, the hair on a dog's back and neck standing on end—and enlarged pupils due to increased adrenaline. Dogs can also salivate from extreme fear or distress. Other symptoms pet parents should monitor are tucked tails and what Dr. Dodman calls “whale eye,” where the whites of the dog’s eyes are visible.

Sleeplessness may also be caused by seizures. “Seizures are not as well suppressed as they are during the day, and are especially common in old dogs,” Dr. Dodman says.

Any change in an adult dog’s behavior is cause for concern, says Pat Miller, CBCC-KA, CPDT-KA, director of Peaceable Paws Dog and Puppy Training in Fairplay, Maryland, and should be discussed with a veterinarian. But sometimes, instead of a medical cause for dog insomnia, there could be external factors causing the sleeplessness that can be easily resolved.

If your senior dog is restless at night, consider any external changes that have occurred, including:

Those new noises may be seasonal. For example, A loud snowplow can affect your canine’s ability to sleep and lead to your old dog pacing at night, says Dr. Dodman. Another dog was disturbed when their house’s heating system kicked in, causing sleep issues, Dr. Dodman also recalls.

People who suffer from sleep apnea may be inclined to think that their older dog with sleep issues has dog sleep apnea. But this may prove not to be the issue. Sleep apnea doesn’t necessarily occur in older dogs, but it does with brachycephalic dogs—that is, dog breeds with flat faces, like Pugs and Shih Tzus—especially if they’re overweight, Dr. Dodman says.

Something else that can affect a dog’s sleep at any age is nightmares. This is something our 12-year-old Bull Terrier, Medusa, experiences. With some yelps and twitching, it seems fairly mild and we wake her up right away. Dr. Dodman says EEGs demonstrate brainwave activity increases during REM, the dreaming phase of sleep. Dogs with the condition REM behavior disorder (RBD) physically act out what’s going on, instead of dreaming quietly, displaying the symptoms you would expect of a nightmare.

If you notice your dog having nightmares regularly, the Cummings School of Veterinary Medicine at Tufts University recommends speaking with a veterinarian and behaviorist to determine and address the root cause of the nightmares.

Once you determine why your old dog won’t sleep at night, you can begin exploring possible treatments with your veterinary.

For example, your vet may prescribe Anipryl for a dog with CCD. Other prescriptions for CCD include Aricept and Namenda. On the holistic side, Huperzine-A, a herbal extract of firmoss used to help some people with Alzheimer’s, can potentially be used to treat cognitive dysfunction and seizures in dogs, per a study by the Cummings School of Veterinary Medicine. But you must consult your veterinarian to get the proper dosage of this natural remedy for your pet and discuss side effects.

If you and your vet determine the cause to be environmentally based, try to establish a nighttime routine for your dog.

“Dogs love routine, some dogs more than others,” Dr. Crosby says. In conjunction to your own human schedule, “Provide structure [to establish a nighttime routine] once possible medical problems have been ruled out,” she says.

“I am also a big fan of the Adaptil collar for dogs who may be anxious with a schedule disruption, thunder, travel or other stresses,” Dr. Crosby says. The collar releases a calming pheromone, formerly called dog-appeasing pheromone or DAP, which can help ease a stressed-out pup suffering from environmentally based nighttime restlessness.

You can also attempt to counter outdoor noises by utilizing a white noise machine, Miller says.

If your old dog won’t sleep at night, your veterinarian can help get to the root of the issue.

“Senior dogs should be getting at least an annual senior well-pet check-up, if not twice a year,” Miller says. “And if any significant behavior changes occur between visits, a conversation with the vet is always warranted.”

Together you can help ensure your dog has a good night’s sleep in their dog bed and greets the morning bright-eyed and bushy-tailed. Well, that last part depends on the breed, of course.