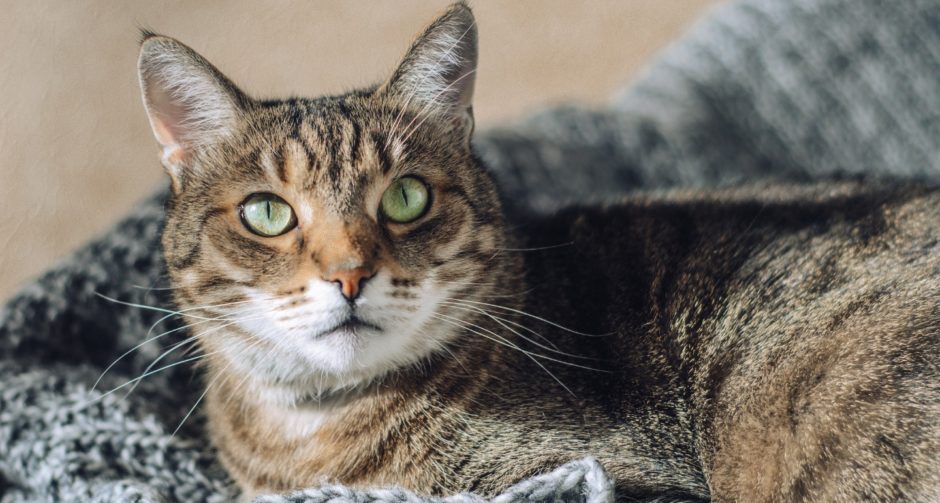 Heartworm in cats is a scary disease that easily can hit close to home. Years ago, I noticed Bubba, my 3-year-old domestic shorthair cat, wasn’t acting like himself. Several months after we moved to Hawaii, he developed a weird, asthma-like cough, wasn’t eating his food and seemed to be losing weight. This wasn’t normal for Bubba, who previously had trouble keeping off the pounds.

I took him to the veterinarian where a checkup and blood test revealed a discouraging diagnosis: Bubba had signs of heartworms. An ultrasound confirmed heartworm disease.

Thankfully, it was a mild case. With restricted activity and a steroid called prednisolone that reduced the disease-caused inflammation, Bubba made a full recovery. Needless to say, I kept him on monthly spot-on heartworm prevention for cats for the rest of his life to reduce the chances of him getting heartworm disease ever again.

Heartworms, Dirofilaria immitis, are foot-long worms that live in the heart as well as lungs and blood vessels of affected animals, says Bianca A. Zaffarano, DVM, a member of the primary care service at the Hixson-Lied Small Animal Hospital and director of the Wildlife Care Clinic at the Iowa State University College of Veterinary Medicine in Ames, Iowa.

Spread by over 70 species of mosquitoes, heartworms can cause lung disease, heart failure and damage to other organs in the body, Dr. Zaffarano says. In addition to cats, they can infect a range of other mammal species, she adds, including dogs, ferrets, wolves, coyotes, foxes, sea lions, otters and, in rare cases, humans.

How Do Cats Get Heartworms?

Heartworm in cats begins when a mosquito bites an animal that already is infected with heartworms, Dr. Zaffarano explains. The mosquito picks up baby worms in the blood called microfilariae (the youngest larvae), and these microfilariae live inside the insect for 10 days to two weeks as they mature into their infective larvae stage, she says.

“When [that] mosquito bites a cat, the [infective] larvae are deposited on the surface of the animal’s skin and enter the new host through the mosquito’s bite wound,” Dr. Zaffarano says.

Once they’re inside the cat’s tissue, they wriggle through the body and are whisked into the bloodstream, she says.

“It takes about six months for them to move around the body and through the tissues and into the bloodstream,” she adds. “From there, they mature into adult worms [in the heart, lungs and blood vessels].”

The ideal host for heartworms is dogs, so many of the worms in cats die before even reaching their adult stage, Dr. Zaffarano continues. As a result, a cat with heartworms typically has very few of them—one to three at the most—and the worms usually live two to three years. However, during that short period of time, they can cause some serious damage. 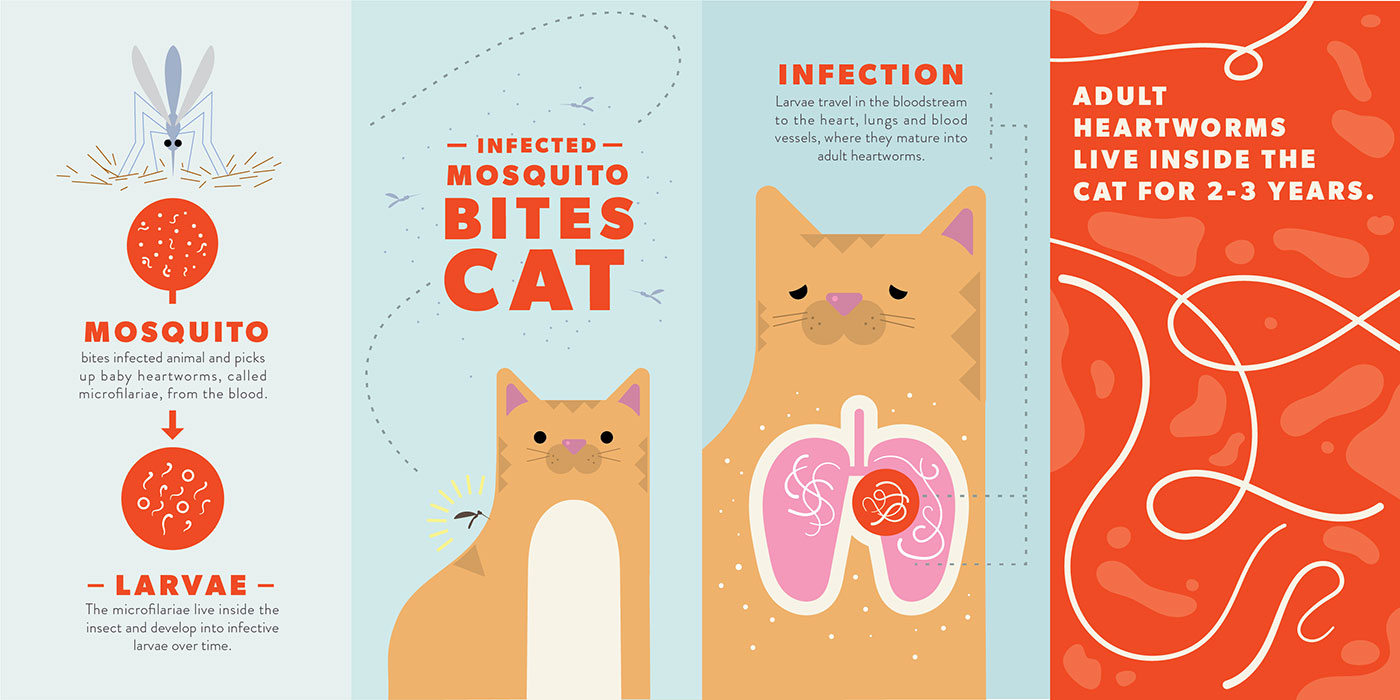 Signs of Heartworms in Cats

About four months after a mosquito with microfilariae infects a cat, signs of heartworms can start to appear, Dr. Zaffarano says. Your cat can show no symptoms at all or have symptoms that range from difficulty breathing to sudden death, she says.

“The symptoms can be very subtle, and people can mistake them for other things, or they can be very dramatic,” she adds.

Cats with immature worms might show these signs, according to Dr. Zaffarano. They often resemble those of feline asthma:

Cats with mature worms may show these signs, she says.

While they mainly live in the heart, lungs and blood vessels, heartworms can travel to other parts of the cat’s body, a process known as aberrant migration, Dr. Zaffarano says.

“They can migrate to the central nervous system—the brain, the spinal cord—as well as the eyes and other organs,” she says. “The damage they cause in other parts of the body results in all kinds of other complications and inflammation when the worms die.”

It’s harder to detect and diagnose heartworm in cats than in dogs, Dr. Zaffarano says. “In dogs, we [just need to] use an antigen test for the presence of heartworm proteins made by the female. Because cats are much less likely to have adult heartworms, they often have a single-sex infection, which means there may not be any female worms to detect.”

To diagnose heartworms in cats, veterinarians rely on both an antigen and an antibody test.

“The antibody test checks for exposure to heartworm larvae [and] for the cat’s immune response against the parasite,” she says. “If the veterinarian thinks the cat is positive, they may choose to do an X-ray, a radiograph or an ultrasound to confirm a diagnosis. Sometimes a good cardiologist can actually see the worms on the ultrasound.”

Treatment of Heartworm in Cats

Unfortunately, the go-to drug that destroys both mature and immature heartworm in dogs—melarsomine dihydrochloride—is not safe for cats, Dr. Zaffarano says.

“That’s the hard part of heartworm in cats,” she says, adding that there’s no way to kill the adult heartworms, so cats have to live with any mature heartworms until the heartworms die.

Instead, you’ll work with your vet to alleviate symptoms of this disease.

“You can try to diminish their inflammation, reduce their cough and, if they have liver problems, you can try and support liver function,” Dr. Zaffarano says. “Sometimes, you may have to go down the antibiotics or anti-inflammatory path to help with heart function.”

“With cats, it’s supportive maintenance and dealing with inflammation that occurs from these worms, and hopefully you don’t have any aberrant migration,” he says. “If the cat is having trouble with heartworm-associated respiratory disease, your veterinarian can give [him] oxygen and corticosteroids to help with inflammation.”

The only thing you can really do, Dr. Zaffarano says, is nurse them through it, hospitalize them for supportive care and hope for a full recovery.

“But prevention is key,” she emphasizes.

The best way to treat this disease is to avoid it in the first place. The best way to accomplish this is by using heartworm preventives for cats year-round, no matter where you live, Dr. Kornreich says.

Dr. Zaffarano agrees and highly recommends keeping your cat on a safe, proven-effective heartworm preventive medicine that contains ivermectin or selamectin. These products, available only through your veterinarian, are formulated to kill heartworms in their active, pre-adult stage, she says.

“For cats, you have two forms: a topical that’s poured on top of the shoulder blades and a chewy pill form that looks like a treat,” Dr. Zaffarano says. “They have the same class of heartworm preventive drug, and some brands have other things in it, like drugs that will prevent intestinal parasites.”

Common Questions about Heartworms in Cats

Many cat parents have tons of questions about heartworms. Plenty of heartworm myths exist, and people may not realize which is misinformation. For one, some people believe they don’t have heartworms in their area, so they don’t put their pets on heartworm medicine.

Below are the common questions about heartworm in cats, which are answered by Dr. Zaffarano.

When should I start heartworm prevention for my cat?

A: To prevent heartworm disease in your cat, begin heartworm prevention as soon as possible after your veterinarian tests for the disease. Heartworm prevention products are safe for cats 6 weeks of age and older, and they should be continued year-round for the entire life of your pet.

Is heartworm contagious in cats?

A: No, heartworm in cats is not contagious. Because cats are not natural hosts for heartworms, the parasites do not reproduce inside cats. Heartworms’ natural hosts are dogs. Mature heartworms living in a dog’s tissue and heart can produce baby worms (microfilariae). These microfilariae are then spread by mosquitoes.

How common is heartworm in cats?

A: Heartworm disease occurs in every state in the U.S. However, the disease is less common in cats as in dogs.

Are there any natural home remedies for heartworm in cats?

A: No, there is not. The only “natural” or “organic” home remedy for heartworm in cats is to consider treatments that center on preventing or warding off mosquito bites.

How do you know if your cat has heartworms?

A: The best way to know if your cat has heartworms is to take him to your veterinarian for testing. Though they can show some signs, which we discussed earlier, they also can demonstrate no symptoms at all.