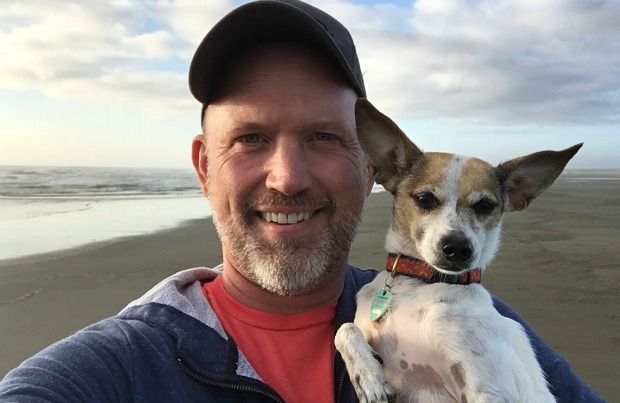 For being the cutest creatures on the planet, dogs can be awfully modest, shy, or downright opposed to having their pictures taken.

Any pet parent can attest that taking a photo of their dog, particularly a selfie, can be a daunting task. Pups will often look in the wrong direction or wriggle away, leaving you with a whole lot of blurry pictures of your beloved canine.

That’s where Chris Rolczynski has come in to save the day with the new app called DELFIE (dog + selfie = DELFIE).

“I’ve been thinking about the concept of a ‘delfie’—a selfie with your dog—ever since I became a dog dad,” Rolczynski (pictured above with his pup) tells PawCulture.

“I got Frankie, my 12 lb. Fox Terrier/Chihuahua, in 2012. Like any obsessed pet parent, I took loads of photos of her, and most came out really bad, especially when I was trying to take a ‘delfie’ of the two of us,” he says. “Why? Because there’s no natural reason for dogs to look at our phones.”

Rolczynski knew there had to be a way to solve this problem that didn’t involve carrying a tennis ball, dog treats or other dog-friendly distractions around with them at all times.

Last year Rolczynski started working on DELFIE, the app that uses the patent-pending HearLook™ sound feature that captures a dog’s attention to snap a perfect picture. DELFIE includes 28 different sounds, including a door bell and a kiss, but users can also record their own sounds.

Rolczynski says that each dog will have a different reaction to sounds, so you just have to find the ones that get their attention in the best way.

“I love seeing how different animals respond to sound,” he says. “Watching your dog’s head turn quickly is a hoot. That’s why I’m excited to add video in a future version. For example, the rocket sound and squeaky toy sounds now elicit howls from Frankie. It’s ridiculously cute.”

“We want DELFIE to be the one mobile app pet parents always turn to to help them take and share better delfies. And better delfies means sharing and showing your best dog-loving self as well as connecting better with other dog lovers like you,” Rolczynski explains.

But it’s not just dog parents that will be able to take part in the fun. Rolczynski has plans to expand the technology to serve other adorable groups. “We’re building our platform so that it can easily be duplicated for cats, babies, and other communities,” he says.

No matter who uses DELFIE, Rolczynski is happy to see the results the app gives pets and their parents.

“I love how DELFIE brings joy to people that you can actually see in their photos,” he says. “We find pet parents have much more genuine and joyful smiles in their delfies because they’re laughing or smiling at their dogs’ reactions.”

Aly Semigran is a staff writer for PawCulture, lifestyle writer for the world, and roommate of Ruby, the cutest dog in the world.