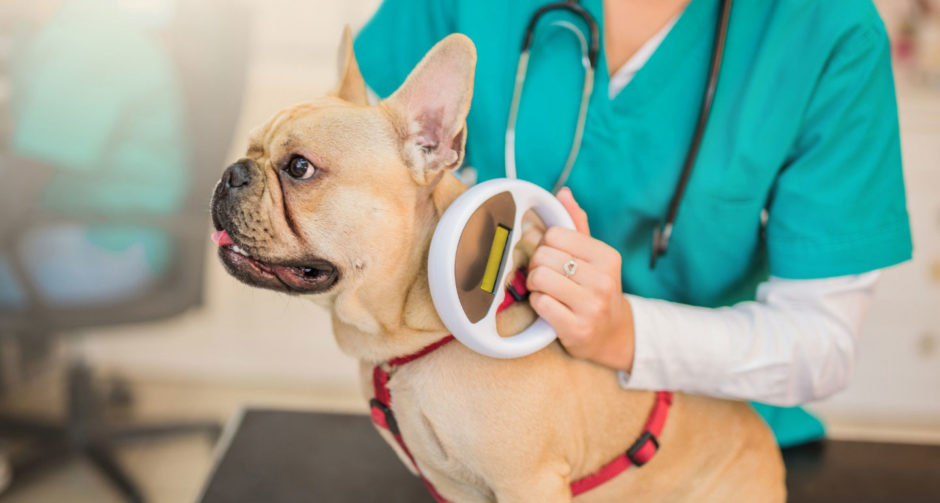 It’s every pet owner’s nightmare: Your dog or cat wanders away from home, or gets separated from you during a natural disaster. Nowadays, with the help of microchipping, many of these animals are being reunited with their owners.

Here, find out everything you need to know about this technology, including what it is and how much it costs.

What is a Microchip?

A microchip is a small capsule that’s about the size of a grain of rice. It’s embedded with a registration number that can be traced back to the pet’s owner.

The chip doesn’t track your dog like a GPS, instead, it uses RFID — or radio frequency identification technology — to transmit information, says Kathy Miranowic, marketing manager of microchip manufacturer HomeAgain.

In order for the chip to be read, a lost pet would need to be taken to a vet, animal control center, or shelter to have his or her chip scanned. Since the chips don’t need a constant source of power, they don’t need a battery or internal power source and can last for your pet’s entire life.

Lost animals who have identification are more likely to be reunited with owners than those without it, says Kate Wessels, the senior communications manager at the American Animal Hospital Association (AAHA), making it important for all pets, including cats, to be microchipped.

A veterinarian will implant a microchip underneath the skin of the animal using a hypodermic needle. It’s typically done between the shoulder blades.

The actual implementation process is minimally painful — it feels similar to receiving a vaccination — and the procedure doesn’t require anesthetic. However, it should be carried out by a veterinarian or under the supervision of one, according to the AAHA.

Since microchips are “biocompatible” and not toxic, your pet won’t experience any allergies as a result of the implantation and his or her body generally won’t reject it if inserted properly.

Implementation typically costs between $40 and $60, and this price usually includes the cost of registering your pet’s microchip in a database. However, some shelters offer free microchipping, and many microchip companies provide extra benefits for an additional charge.

Once the microchip is implanted, you must enroll your pet’s unique ID number in a microchip database in order to be contacted if your pet is lost and then found.

“If you adopt a pet, or acquire a pet that is already microchipped from someone else, it’s important to make sure that you register the existing microchip with your contact information,” says Wessels.

Once your pet is scanned for a microchip, his or her ID number can be put directly into an AHAA database that pulls up the microchip company that your pet’s ID number was last registered with, along with a telephone number for that company. From there, the finder of your pet can call the microchipping company to gain access to your contact information, says Miranowic.

Incorrect, out-of-date, or no owner contact information were the main reasons for a microchipped animal not making it home.

What is a Microchip Scanner?

Since there are different kinds of microchips, competing companies use different frequencies for scanning, according to Wessels. This means that not all scanners can detect every microchip, so if your lost pet is brought to a vet or shelter, but the scanner they have can’t read the chip, they’ll assume the pet doesn’t have identification.

In the United States, you’ll find chips that use frequencies including 125 kiloHertz (kHz), 128 kHz, and 134.2 kHz. The International Standards Organization (ISO) is trying to create a global standard for microchips of 134.2 kHz, but universal scanners will detect all microchips, regardless of the frequencies.

Call your local vets and shelters to see if they have universal scanners available, since that is where your pet is most likely to go missing. And make sure to select a microchip that can be read by a universal scanner.

At the end of the day, most pets who go missing aren’t found by vets or animal control officers, they’re found by private citizens who don’t have a microchip scanner on hand. In addition, some shelter facilities don’t have the technology to scan or have access to a universal scanner.

“Microchipping is not a fail-safe,” says Wessels. “We always recommend pet owners keep a collar and updated tags on their animals at all times.”

But in the case that tags and collars fall off, a microchip is a permanent, tamper-proof back-up form of identification, and it might be your pet’s ticket home.