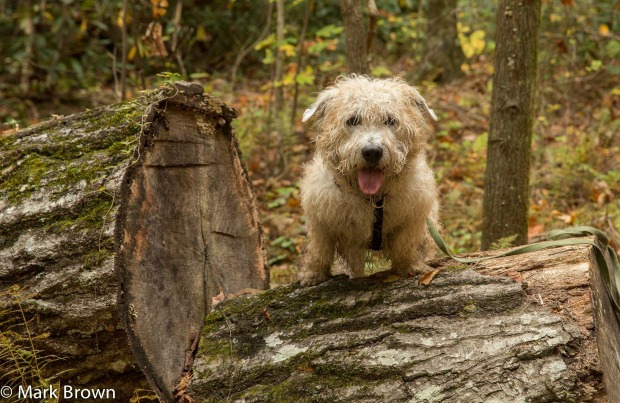 When Griffin, a three-year-old Glen of Imaal Terrier, showed signs of stress at agility competitions, his owner decided they both needed a break. Performance sports require both the human and canine to be at the top of their game, and Griffin wasn’t. The other dogs bothered him.

“I wanted to work on building up his confidence,” says Kelli Whitfield of Pensacola, Florida, Griffin’s owner.

She chose parkour as the means to boost Griffin’s self-assurance, and it worked. Griffin could practice at his own pace with no other dogs around.

“The more parkour he did, the more he wanted to do,” Whitfield says. “Griff would even find his own obstacles and show me what skills he could do on them.”

So, what is dog parkour? And how can your dog get involved in this new canine sport? Find out, below.

What is Dog Parkour?

Dog parkour, or as it’s sometimes called urban agility, is a fairly new sport that blends elements of human parkour (moving rapidly through an area, typically in an urban environment, running on, jumping over and climbing obstacles) with dog agility. In the canine version, dogs interact with environments that aren’t normal for them, says Dr. Abigail Curtis, co-founder of the International Dog Parkour Association (IDPA).

Curtis and her other co-founder, Karin Coyne, practice human parkour. Eventually, they noticed how many of the same type of obstacles, like benches, walls, railings and concrete barriers, were also available to dogs. “[The dogs] go through, on, under and into all types of obstacles,” says Curtis.

One of the beginner behaviors, called “2 Feet On,” is when the dog approaches an obstacle (like the table portion of a picnic table for a tall dog or the bench of the table for a shorter dog), places his two front feet on the obstacle and remains there for at least five seconds.

Another beginner behavior, called “Under,” is when a dog crouches and goes under an obstacle that is shorter than his or her head height. Directions for teaching each of the skills appear on the IDPA website. Competitions for dog parkour don’t exist and, for a dog like Griffin, that turns out to be one of the pluses of the sport.

Getting outside with your dog and giving him or her one-on-one attention has a variety of advantages. Instead of walking on the same old sidewalks down the familiar streets around your house, you get out and explore different areas of your community or beyond.

“You can find areas to practice where there aren’t other dogs or people, so it’s good for fearful and reactive dogs,” says Curtis. “Puppies, adult and senior dogs all enjoy dog parkour. It’s even great for a dog that needs conditioning, like agility dogs that only compete on weekends.”

Curtis’s own 15-year-old dog does parkour at a more senior-age level (she likes to do “2 Feet On” and “4 Feet On” activities on objects at low levels), which helps her maintain cognitive awareness, Curtis says.

For dog owners, the benefits of dog parkour are the same: spending time with your pet and exploring new environments. Whitfield even recruited a local friend and their dog to join her and Griffin on mini hikes searching for items to use as obstacles.

Whether you work with your dog alone or join someone else, safety is always paramount. The practices IDPA employs are designed to keep your dog as safe as possible while practicing parkour, says Curtis.

One of the main safety protocols includes requiring a dog harness and a leash that is six feet long or less. The harness should have a ring on the dog’s back where you fasten the leash so no stress is put on the dog’s neck.

You’ll also want to inspect the obstacles being used before your dog goes on, around or under them. Make sure they aren’t slippery, don’t contain nails, glass or any protrusion that might harm their paws. Act as a spotter for your dog so that he or she doesn’t jump from an unadvised height and land on a hard surface. If an action seems dangerous, it probably is, says Curtis.

Curtis also recommends paying close attention to your dog during your parkour sessions. One day, he or she might not feel like performing, so honor that. You can come back in a week or later and attempt that same obstacle again.

“It’s all about growth and how you help your dog learn a skill,” says Curtis. “Then the dog will become the most confident version of themselves.”

The more Griffin and Kelli did parkour, the more the dog’s confidence in his ability grew. Now, he’s returned to agility competitions but has added dog parkour to his routine. He looks for objects at the show sites where he can show off a parkour behavior. Recently, at an agility competition, Griffin put two paws up on a cooler, backed up a set of steps and jumped on some logs, all on his own.

Heather Larson, who lives in Tacoma, Wash., writes about dogs and travel and sometimes traveling dogs.