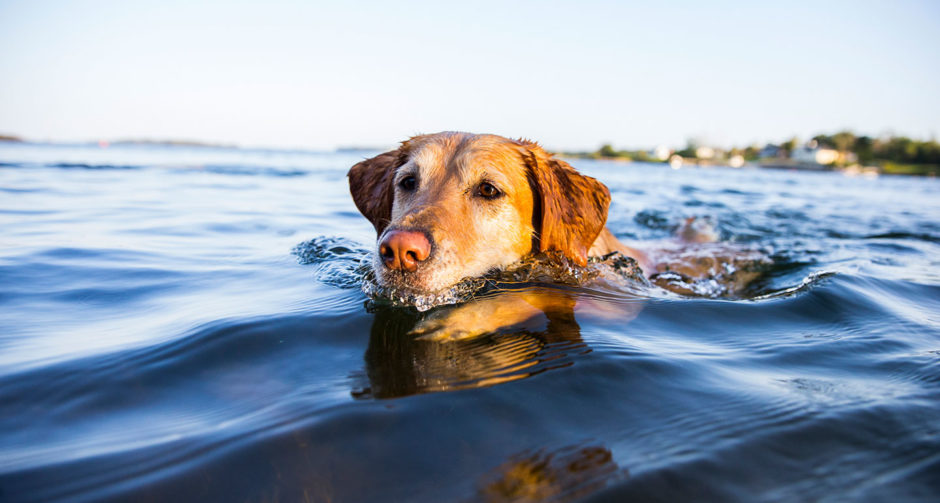 Planning to take your dog out for a swim? You might want to think twice. While you might think your dog will be a natural in the water, the truth is that swimming is not fun—or even comfortable—for a lot of dogs.

Even if your dog loves water, certain behaviors can put him at risk of drowning, unless you take precautions from the start. Here are six things NOT to do when taking your dog swimming:

Don’t Assume Your Dog Can Swim

While most dogs can learn to swim, some may have a harder time swimming due to the way they are built, says Dr. Jeffrey Stupine, head veterinarian at the Pennsylvania SPCA.

“Think about the Dachshund, or French Bulldog – they have short little legs that don’t allow them to take strokes or get the push they need to stay afloat,” Stupine says.

Other breeds that might not be great swimmers? Dogs that are very densely muscular as well as dogs that are evenly proportioned in the front and back, such as English Bulldogs, French Bulldogs and Pugs, says Dr. Patrick Mahaney, owner of California Pet Acupuncture and Wellness.

“These dogs also have compromise to their respiratory function as a result of their short nasal passages, constricted nostrils, overlong soft palate, and collapsing trachea,” he says.

These characteristics make it difficult to breathe properly – an important skill when trying to swim. In addition, Mahaney says these breeds (known as “brachycephalic” breeds because of their short heads) often have short, minimally-functioning tails.

“They lack an effective rudder to help direct the body while swimming which makes them more likely for their hind end to sink,” Mahaney says.

You should also be careful when trying to get sick, senior or obese dogs into the water, says Mahaney.

“Dogs that have compromised mobility (trauma, surgery, etc.) aren’t as strong swimmers as their healthy, younger, slimmer and able-bodied counterparts,” he says.

While life jackets are always a good idea, there are certain times and places when they are an absolute must.

“It’s crucial to [put your dog in a life jacket] in open or rough waters such as lakes, rivers, oceans, etc,” says Mahaney. “Additionally, juvenile and senior dogs and those having compromised mobility or some form of illness should always wear a life jacket.”

In addition, Mahaney says overweight dogs and dogs with long torsos and short legs might have a harder time staying afloat so should also sport life jackets every time they swim.

When choosing a dog life jacket, Mahaney says there are a few key factors to keep in mind, with buoyancy and visibility topping the list.

“Reflective badges and bright colors are important so your dog is easily seen in the water,” says Mahaney. “Additionally, there should be handles for easy retrieval from dangerous circumstances and simple functioning snaps for quick removal and application.”

Whatever vest you choose, it should also fit well. “A canine life jacket should be specifically made for your dog’s size,” Mahaney adds.

Your dog should never be allowed to swim without supervision, especially in bodies of water that have currents, like rivers and oceans.

“Since dogs lack the ability to effectively grasp an object with a single paw and must use their paws or their mouths to hold on, there’s a higher chance that they will not be able to pull themselves to safety to escape from a current,” says Mahaney.

When unsure about the strength of the water current, it’s always best to err on the side of caution, says certified dog trainer Madeline Friedman.

“I highly recommend keeping a dog on a strong, well-made long line of 20 to 30 feet if you are unsure as to what your dog can handle, so you can pull your dog in if necessary,” Friedman says. “Owners also need to be aware that some currents are stronger than what is visible on the surface, especially in larger waterways and oceans.”

Unknown waters means unknown dangers – some of which could be deadly. For example, a common danger in riverbanks is snakes.

“Some snakes prefer small holes in the ground or hiding under rocks so be particularly careful about allowing your dog to explore in places where they may stick their nose and startle a snake,” says Stupine.

Aside from wildlife, be mindful of sharp rocks or shells (which can cut your dog’s feet) or the changing depths of water. If you don’t know how deep the water is, check it out before you allow your dog to get in.

Another commonly ignored danger is blue-green algae, which Friedman says can cause severe gastrointestinal upset, as well as eye, ear, throat and skin irritation.

“Many dogs swallow some amount of water when they swim, so blue-green algae is a concern,” says Friedman.

This is especially true during the warmer months, as algae tends to bloom as water temperature rises, according to Friedman.

As a rule of thumb, pet owners should never expose their animals to temperatures that they themselves are not comfortable being exposed to, Stupine says.

“Remember that your dogs cannot tell you when they are hot or cold, so you have to follow their cues,” Stupine says. “If the water is too cold for you to swim in, it will be too cold for them too.”

Cold water puts your dog at risk of hypothermia, where the body temperature falls below the normal range of 100 to 102.5 Fahrenheit.

“When hypothermia occurs, blood flow is driven from the surface of the skin and extremities to vital organs, including the heart, lungs and brain,” says Mahaney. “Muscles working hard to swim need plentiful blood flow, so colder water doesn’t permit effective delivery of oxygen and removal of metabolic waste produced as a result of muscular activity.”

The result? Your dog’s muscles get tired and the risk of drowning increases.

Don’t Let Your Dog Get Too Tired

“A huge hazard for dogs is when the dog becomes tired far out from shore in a waterway and can not make its way back,” says Friedman. “Dogs who love swimming become very highly aroused at the prospect of swimming, and can bite off more than they are able to chew in terms of physical ability.”

The best course of action? Never take your eyes off your dog when he’s in the water, even a pool, where your dog can fall or jump in and become stranded and unable to get out, Friedman says.

“In pools, the very first thing I teach the dog is where the exits are, and I make sure the dog is able to get out on his own without help,” she says.

Friedman recommends building your dog’s stamina in the water incrementally and knowing exactly the amount of time it takes for your dog to show the most basic signs of becoming tired.

“Remember, too, that a waterway with a current will tire your dog out more quickly than swimming in a pool,” Friedman adds.