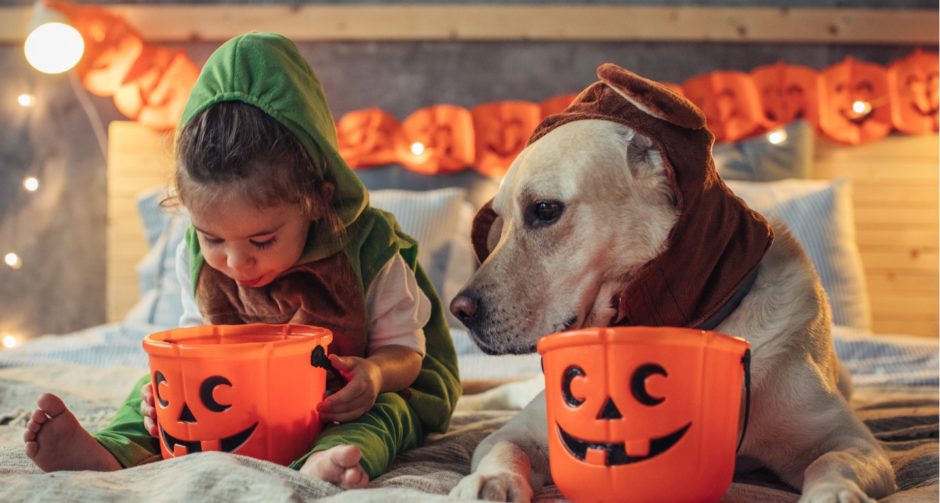 Halloween is one of the happiest days of the year for little ones and adults alike. What’s not to love about a day that’s all about free candy? Well, if your little one happens to be furry, then there’s plenty. Among the top Halloween safety tips pet parents need to know, candy cautions ranks high.

You probably know that candy isn’t healthy for your pet to eat. But did you know that in large enough quantities, some types could be outright deadly? Making matters worse, candy, unlike other toxic substances, tastes good to our pets. While your dog is unlikely to gobble up a mound of powdered cleanser you spilled, the same can’t be said of a bowl of Halloween candy you knock over. Bethany Howe, a veterinarian at Hawkins Animal Hospital and Wellness Center in Ronkonkoma, NY, explains eight of the worst toxic foods for dogs and cats that usually show up this time of year.

This is well-known as being at the top of the “What not to feed dogs” list, but it bears repeating at this time of year. Chocolate contains substances called methylxanthines, which can cause vomiting, diarrhea, rapid or irregular heart rate, tremors and seizures. “Dark chocolate is the most toxic,” notes Dr. Howe. White chocolate has the lowest level of methylxanthines, followed by milk chocolate, while baking chocolate has the highest. Even a few ounces of chocolate can make a small dog sick, so no amount or type of chocolate is OK for a pet to eat.

The flesh and milk of coconuts contained in human candy contain oils that may cause an upset stomach and loose stools. And that doesn’t even take into account the chocolate coating on these popular treats. If you want to give your pet a sweet treat, only feed products made especially for them, like Fruitables Greek Coconut Yogurt Flavor Crunchy Dog Treats.

Candy that contains essentially one ingredient—sugar—can cause painful gas and diarrhea.

Raisins (and grapes) are one of the most toxic foods for dogs and cats. Experts are uncertain about exactly what it is in grapes and raisins that is so harmful, but eating them can cause sudden kidney failure in pets. If your pet does eat them, or you suspect he has (signs include tiredness, vomiting and diarrhea), take him to a vet right away.

Peanuts, peanut butter and almonds that are included in many common Halloween candies are not safe for pets compared to other peanut-flavored dog treats. Nuts are high in fat, which can cause diarrhea, vomiting and even pancreatitis in dogs and cats. Macadamia nuts, while less likely to be found in your typical Halloween candies, are especially dangerous. Signs of macadamia nut toxicity show up within 12 hours in dogs and include weakness, vomiting, tremors and joint pain.

Hard candy’s size, shape and slipperiness make it a major choking hazard to pets. This goes double for lollipops, which include a second hazard: a stick that could injure your dog’s digestive tract.

While one may assume sugar-free candy is the lesser of two evils, it can be far worse than the regular kind. A common sweetener in many brands of sugar-free candy and gum is Xylitol, and ingestion by a dog or cat causes a rapid, severe drop in blood sugar, giving the pet seizures and possibly rendering him unable to walk. Severe liver damage, if not death, can be the end result. Even suspected ingestion of Xylitol is reason enough to head to the animal hospital.

Mini bags of pretzels and chips

Ok, these aren’t candy, but they’re commonly given as handouts to trick-or-treaters. The problem with these, more than the actual treats, are the bags. Plastic bags and wrappers pose a risk in themselves. They can irritate the digestive tract and even obstruct their intestines if your pet swallows them in their excitement to get to the goodies inside. “Cats are even more apt to eat plastic than dogs,” notes Dr. Howe.

What Halloween Foods Are Safe for Dogs?

Now we know without a doubt what not to feed dogs. But that doesn’t mean that your pup won’t get any treats this Halloween. If they have their own goodies, after all, they’re less likely to try to steal the forbidden kind. You can even find dog treats containing pumpkin for a seasonal taste sensation for your pup. Interesting pumpkin treat options include The Honest Kitchen Cuddles Bite-Size Cookies with farm-to-bowl ingredients (and nothing at all from China); Castor & Pollux Good Buddy Dog Treats with a crunchy texture and an additional fall flavor—apple; and Spot Farms Perfect Pairings Dog Treats, crafted with human-grade ingredients, including duck.