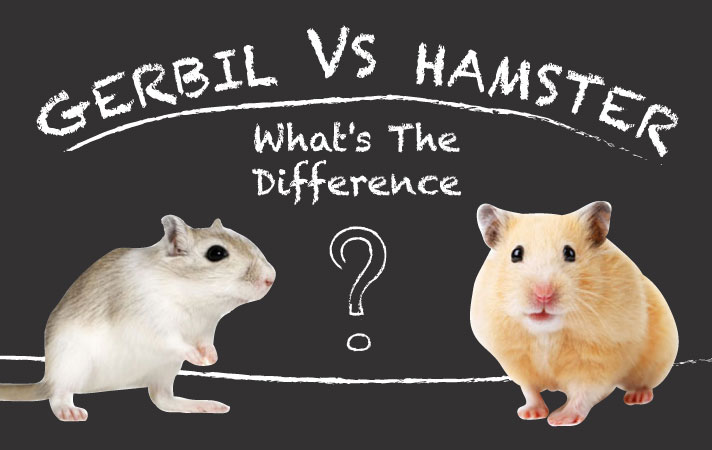 If you’ve ever seen their petite features and watched these pint-size critters in action, you can understand why gerbils and hamsters are such popular pets. At first glance, they share several similarities, such as ever-growing incisor teeth, tiny claws that indulge their passion for digging and burrowing, and an appetite for protein with some seeds, fruits and veggies added in.

But let’s take a closer look to see what makes each unique and which might better fit for your home and lifestyle.

I’m definitely partial to furry critters, as they seem more fun for snuggles, and both hamsters and gerbils deliver.

Short is a key descriptor for the stout-bodied hamster: short, stubby tail; short nose or snout; and short, stocky legs. On its wide feet, hamsters sport a darling plodding waddle when walking.

Gerbils typically are longer than hamsters with “long” being the leading theme. They have longer, pointed noses, similar to a rat; long hind legs on which they love to stand and longer tails.

A significant disparity is the hamster’s roomy internal cheek pouches where the little hoarders can stuff food to carry to their custom-made underground storage chambers. Some say that their full cheeks can double the size of their heads!

Hamsters have spacious cheek pouches where they can store food. Gerbils don’t. tanya_morozz/Shutterstock

Size is pretty important if you have small children, because a larger pet is much easier for little hands to hold onto safely. The average pet gerbil matures to 5 or 6 inches long, not including the 3- to 4-inch-long tail, and weighs 2 to 4 ounces by adulthood. The most common pet hamsters range from dwarfs at 2 to 4 inches long (about 1.5 ounces) to the Syrian hamster averaging 5 to 7 inches long and weighing 4 to 8 ounces.

Both hamsters and gerbils come in a variety of colors.

Hamsters can have short or long hair ranging in color, texture and pattern. Colors range from white to cinnamon to brown to gray to black. Some hamsters’ fur may have a satin sheen, others may have wavy hair. Some are decorated with a dark stripe down the middle of their backs, while others have a white band of fur around their bellies.

“Although both sexes come in long hair, the male long hair is much longer and fluffy,” says Erin Ramsey, co-president of California Hamster Association, and co-owner of Cheeks and Squeaks Hamsters in Southern California.

If you’re not a fan of fur, there is even a hairless variety.

Gerbils’ soft, dense coats come in a wide variety of colors—maybe 40 to 50 possible colors and combinations, according to Libby Hanna, a certified judge and president of American Gerbil Society, in Clermont, Florida.

Colors include gray, tan, brown and reddish brown with white to gray “underpants.” Some gerbil species have dark markings on their heads and others grow patches of white or buff fur behind their ears.

“They have long tails that are covered in fur—usually same color as the gerbil— that end in a brushy tuft like a paintbrush,” Hanna says.

Personality can be a critical part of the decision-making process when adding a pet to the family. Gerbil owners describe them as intelligent, inquisitive and active pets. In fact, Hanna says they are incredibly interested in people.

“They watch what you’re doing and like to be kept in the room with most activity because they like action,” she says. “Because they’re not strictly nocturnal or diurnal, they’re very in tune with human activity and figure out the household routine.”

These social critters need daily interaction and handling, and they love being held. They also will entertain themselves by digging, gnawing and shredding provided materials for nesting.

Gerbils are social critters and enjoy the company of other gerbils. Onishchenko Natalya/Shutterstock

Because gerbils jump and climb, it’s important to keep an eye on them when out of their tanks.

“They don’t mind being woken up and are ready for action all the time,” Hanna says. “If you give them deep enough bedding, they will make very interesting burrows and spend a lot of time rearranging the ‘furniture’ in their nest.”

Primarily nocturnal, hamsters might spend a little time building a nest before curling up to sleep the day away. Night is the hamster’s time to explore, so experts say that early mornings and evenings as the best times to interact with them. And owners caution against startling or waking them prematurely, as they can be quite grumpy.

When active, hamsters also enjoy constructing burrows complete with chambers for nesting and storing their food hoards. “[Dwarf hamsters] love to explore and thrive in environments full of stimuli,” says Melissa Brown, co-president of California Hamster Association. “Sometimes they can even recognize their owner’s voice and will respond.” For a more interactive species, Ramsey points people to Syrians: “They seek out human attention and tend to be more interactive than dwarf hamsters,” she says, adding that “they are happy to be held and cuddled, but only for a few minutes.”

If you, too, have heard rumors about these critters nipping and biting, here’s what our experts say.

“Hamsters don’t tend to bite unless threatened or frightened,” Ramsey says. “They may want to taste your hands if you have a yummy scent on them, so washing your hands before handling is a good idea.”

“Gerbils that are raised properly—especially handled at the critical age of 18 to 35 days—will pretty much never nip or bite,” Hanna says.

Playing Well With Others

A big contrast between these popular pet rodents is their sociability. Most hamsters are solitary and territorial, even fighting to the death at times. However, Brown says: “Dwarf hamsters that are born and raised together typically are successful living together permanently as long as they have multiple water bottles, hides, wheels and toys. This will give them the chance to interact but also get away and have some alone time.”

At the other end of the spectrum are social gerbils. Hanna recommends getting a pair or group and suggests even numbers.

For caging, Hanna recommends a minimum of 5 gallons of aquarium tank space covered with a mesh lid per gerbil, and her preference for aquariums is due to the gerbils’ propensity to chew threw (and ingest) everything.

“Because gerbils produce very little urine and their poops are tiny, hard pellets, expect to clean the tank every two weeks, and alter as needed,” she adds.

“With the right-sized cage, the nest can be spot cleaned and a full clean out would only have to happen 4 to 5 weeks at a time,” she says.

Beyond their diet of greens, fruits and seeds, hamster and gerbil protein needs vary.

“The recommended food [for hamsters] is a formula of 18 to 23 percent protein,” Ramsey said. “Hamsters can even eat chicken or eggs as a treat.”

Some gerbil owners supplement their pets’ diets with crickets and mealworms. For commercial food, Hanna said to look for 14 to 15 percent protein and a mix of grain types.

Unfortunately both critters don’t live very long. Hamsters average 2 years while gerbils average 3. In some instances, both critters have lived beyond 4 years, but that is rare.

You may only have a few years with your hamster or gerbil, but caring for these tiny creatures is a rewarding experience you’ll cherish for years to come.