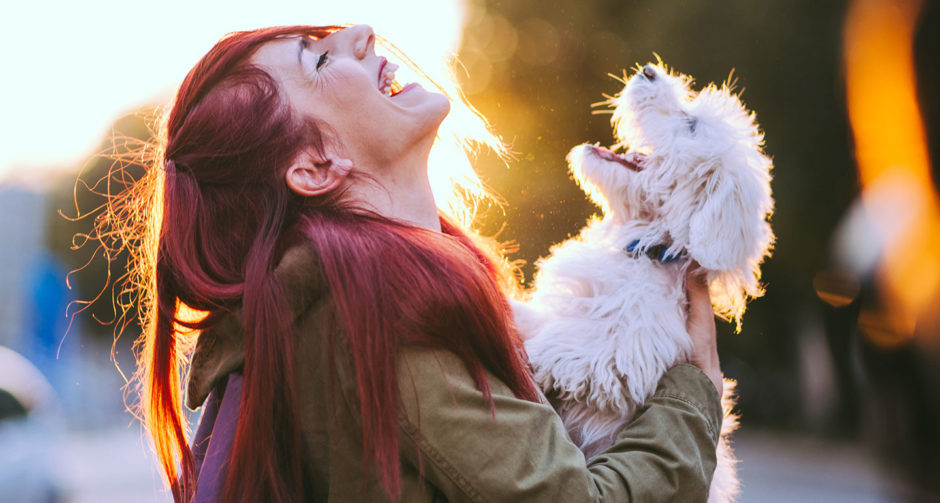 The hard part is done. You looked at dozens and dozens of adorable pets. You somehow narrowed it down. You brought one (or more!) to their forever home, and now you just need to come up with a name. But not just any name! You need a funny pet name that perfectly encapsulates their personality while also standing out as unique.

We totally understand how overwhelming it is to come up with a name when you are spending all your time oohing and aahing over that adorable new member of your family.

Let us help with some funny pet names that will bring almost as many smiles to you face as your new pet does.

Name your dog after the greatest fictional president of all time: Josiah Bartlet from “The West Wing.” Bonus: Whenever someone asks why your dog is acting so silly, you’ll have the built-in response of “Let Barklet be Barklet.”

No longer an insult! Name your dog after one of the hottest shows on TV.

This name adds a dose of entertainment every time you talk about your pup. For example: “I need to go home and feed my Henchmen.” “I need someone to take care of my Henchmen.” “My Henchmen got distracted chasing a squirrel,” etc. Bonus points if this name choice leads your colleagues to worry about your extracurricular activities.

Name your furbaby after the most important person in your life. Also, get great joy when you call for your dog, and 20 people turn around because they think you’re asking for them.

Humor can come from unexpected juxtapositions, such a naming something so adorable (your cute dog) after something so ugly (a grotesque beast).

You are what you eat! And in this case, your dog is named for what they chow down on!

If your dog acts super silly, consider this name, a Yiddish word for ridiculous.

Because they’re excellent at getting you out of bed every morning at 7 a.m. (at latest).

When it comes to naming your cat, this isn’t just a super idea, it’s a supercalifragilisticexpialidocious idea! Also, much like their namesake, we guarantee that Meowy Poppins will love bags.

This would be a great name if you have a cat who looks a lot like another cat in your household. Or for one who follows you around like a shadow.

Honor one of the original members of “The Baby-Sitters Club” by naming your cat after her. Bonus points if your cat has fashionable style, a love of hiding treats and an inferiority complex when it comes to her older sister.

This funny cat name is just the facts, ma’am. Every cat owner knows that all cats want to do is snuggle (and by snuggle we often mean put their butts in your face). So why not just name your kitty the truth?

Ever notice your cat staring out at nothing—or at something you can’t see? Consider naming her after the medium from “Ghost.” Hey, who’s to say that your cat isn’t seeing a spirit who wants to make sexy pottery with you?

For when your cat is so cute you want to eat her up with a side of sour cream. Get other food-inspired pet names.

According to Merriam-Webster, one meaning of catawampus is “fierce, savage, destructive.” Your cat can be all of those things, but they also went to grad school, and now they’re a professor. Also, why don’t you ever show up for their office hours?!

Did you adopt an older lady cat? Give her a name that matches!

Holy lovable pet, Batman! Your new cat Batman is what goes bump in the night. Now, at last, Batman and Catwoman (that’s you) will get the love story they always deserved.

Yes, Aaron Burr Jr., the third vice president of these United States, became infamous when he shot and killed former Treasury Secretary Alexander Hamilton. But also he is the only character from Lin-Manuel Miranda’s musical juggernaut “Hamilton” whose name has a cat pun in it, so here we are.

Oh my god, Becky. What does this cat want? Perfect for a cat who’s always meowing!

You, you, you oughta know what a great name this would be for a horse.

This dark horse candidate is a leading contender for a horse name.

This name is inspired by one of the greatest racehorses of all time, Man o’ War. But, you know, the opposite. Hey, in today’s day and age, we need to give Woman o’ Peace a chance.

An excellent title for a horse who loves drama. Catch her next season on “The Real Horsewives.”

These days, remaking all-male movies with female leads is all the rage. (See “Ghostbusters” and “Ocean’s 8.”) Why not extend the trend to funny horse names?

Short history lesson: Before cars, people used horses to get around. And sometimes it’s nice to call a spade a spade, ya know?

Where this bird is going, they don’t need roads.

Have you seen Simone Biles fly through the air? Is there a better name for a bird than the one belonging to the greatest gymnast of all time? Probably not.

Watch the former sing to the latter all day. But never give them a male bird to fight over.

Name that talkative bird after this onomatopoetic word meaning chatterer. Bonus: Synonyms for this funny bird name include birdbrain and featherhead—which are things birds have!

This bird name, honoring the Notorious RBG, rules supreme! Some of your friends and family will hope she lives forever.

Does your bird have a beautiful plume that makes others envious? Do you notice other birds attempting to copy it? If so, name her after the most popular hairstyle of all time.

I’ll take Great Names for a Bird that Double as a Baller Pun for $800, Alex.

TV’s greatest fictional reporter, Perd Hapley from “Parks and Recreation,” is overdue for a bird named after him. Ya heard?

An ideal moniker for a songbird. You never know which tune they’ll whistle next. Ask them to work in some love songs before you invite that cutie from study hall over to your house.

When it comes to funny rabbit names, the buck stops here. Moreover, the chances are good that any rabbit named after the 33rd U.S. president will gather all the animals in the house together for their own version of NATO.

A proper name for a proper bunny.

Try not to get this classic hip hop song stuck in your head every time you call your rabbit. I said a hip, hop, the hippie, the hippie, to the hip hip-hop, and you don't stop…

Pay homage to that tried-and-true rabbit song, “Little Bunny Foo Foo,” which is about a bunny who hopped through the forest, picking up field mice and bopping them on the head.

If the children’s story “Bunnicula” is to be believed, there are rabbit vampires. And if pop culture has taught us anything, where there are vampires, there are slayers. As “Buffy” showrunner Joss Whedon taught us, into every generation, a slayer is born, one rabbit in all the world, a chosen one who alone will wield the strength and skill to fight the forces of darkness.

Marvel at your rabbit, who is named after Nick Fury, the director of S.H.I.E.L.D. and the founder of the Avengers.

Loudly proclaim that you are not a Carrie, a Samantha, or a Charlotte by naming your bunny after the most level-headed “Sex and the City” character, Miranda Hobbes. (We’ll let you come up with your own joke here about having sex like bunnies.)

Give your fish a bit of self-esteem with a name fit for royalty—and the largest creature living on planet Earth.

You remember The Wet Bandits, the notorious house robbers from “Home Alone” who, after robbing homes, left the water running as a calling card. Sure, sure, they changed their name to The Sticky Bandits in “Home Alone 2: Lost in New York,” but for a brief moment in time, they created environments that any fish would find homey.

Herringbone is a pattern usually found in twill fabrics that resembles the bones of a herring fish. Name your fish after a pattern named after a fish and finally learn what it means to be caught in “Inception.”

This character from “The Godfather” sleeps with the fishes so he might as well be one.

Whenever someone says irony is dead, just pull out a video of your happy, healthy fish.

Your fish could give the real Michael Phelps and Katie Ledecky a run… er, swim, for their money.

Of course you won’t eat your fish! The idea is laughable, making this an excellent funny fish name indeed.

A genteel name for a genteel hamster. Bonus: Each time you go to the pet store, you can declare, “As God as my witness, my hamster will never be hungry again.”

Name your new best friend after one of television’s most enduring sidekicks, with a little adjustment to make it a bit more suited for a nibbly hammie.

Perfect for a pair of hamsters, especially if one has white fur. Watch Pat and Vanna run on their Wheel of Fortune. Hope that they don’t go bankrupt.

Make amends for all those Tamagotchis that you just let starve in the ‘90s by naming your hamster after them—AND THEN REMEMBERING TO FEED THEM.

Name your favorite rodent after the author of “The Time Machine.” If anyone asks, the H stands for Hamster.

God of Thunder? More like God of Squeakily Drinking His Water!

Wanna really confuse your hamster? Name them Guinea Pig. We promise this will be a great experiment!

Have two hamsters? Name them after this popular breakfast combo.

Look, I fully understand the challenges of choosing a funny pet name. Would you believe this funny pet names list was put together by a woman who named her cat Namey?

N-A-M-E-Why? Because I couldn’t actually come up with a name for her, and one of my friends started calling her Namey the Nameless Cat, and, well, here we are 12 years later.