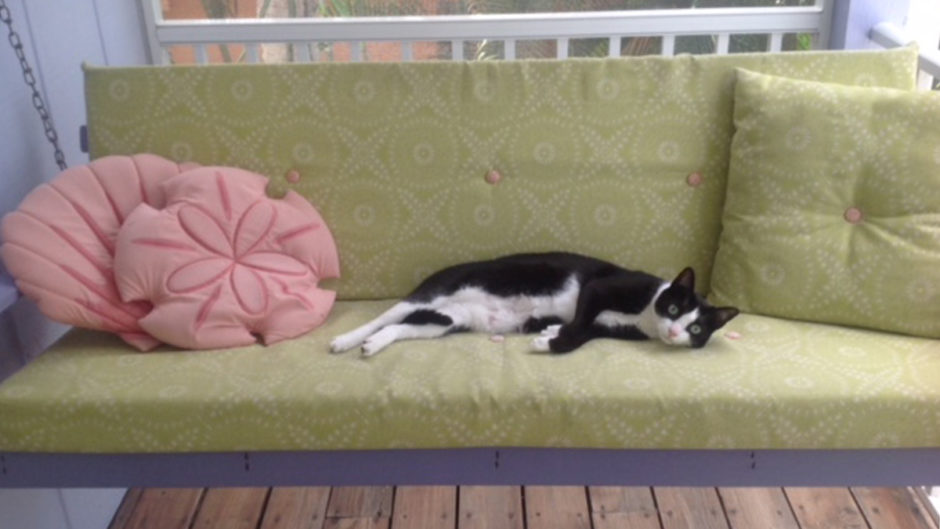 When Hunt Ethridge’s family visited Puerto Rico to meet his fiancée’s parents and search for wedding venues, they never imagined they would bring an extra traveler home with them. But that’s exactly what happened.

How a First Encounter Changed Everything

It was Thanksgiving week, 2010, and the Ethridge family was staying at the Villa Montana Beach Resort hotel in Isabela, Puerto Rico, trying to decide if the place was a good venue for an upcoming wedding reception. That’s when a tiny kitten first made her appearance.

“One morning, my other son, Chad, was asleep in the living room on the pullout couch,” says Edie Ethridge, Hunt’s mother. “When I went to the kitchen to make coffee, to my surprise, a kitten was in bed with Chad, both asleep. I asked him if he knew there was a cat in his bed, as we were in an open-air condo, and he said, ‘Yes, we found her last night.’”

Hunt had been part of a “let kitty in” adventure the night before.

“My now-wife, Keren, my brother Chad and I were walking back after an evening of drinks when we saw this tiny little kitten chasing and catching moths to eat under a bush,” Hunt explains. “We couldn’t stand to see this adorable and friendly little stray go hungry, so we brought her back to the apartment and gave her some meat and cheese, and she was SO hungry!”

At the end of the evening, Chad took her to bed to snuggle—and that was the beginning of the tiny cat’s adventure with the family. The kitten—deemed Isabela in honor of the town where she came from—was about 6 months old, but tiny and quite thin.

“We were there less than a week and she visited often,” Edie says. “We questioned everyone we could who worked at the Villa Montana, and they said she was a stray that showed up about a week ago. No one knew anything about her.”

Time to Say Goodbye—or Not

On their last day at the hotel, Edie got up very early to walk the grounds and take pictures of the venue to refer to later.

“At the oceanside restaurant, there she was, as cute as could be, almost like she was waiting for me,” she says. “I felt like this was a pretty strong sign that she was meant to be ours!”

When Edie got back to the apartment, she talked to her husband about the encounter. They both agreed—it was a kitten rescue mission, and Isabela was going home with them.

“We called the airlines and were told we needed the kitty to see a vet and get a certificate that she had been seen before traveling to the U.S.,” Edie says.

Finding a last-minute appointment with a vet wasn’t easy, and it required some digging around. But Isabela did get a full check-up and was chipped and cleared to fly.

“I will never forget what the vet said to me,” Edie says. “He said, ‘Thank you for adopting one of our strays from Puerto Rico. Most of them don’t survive because of sickness, starvation, predators, being hit by a car, etc., but I can tell that this little girl is going to have a good long life with you.’”

Once they got home, Isabela had to adjust to her new life in Florida and learn how to share the home with other furry family members.

“We had a dog, and because the kitty lived on the streets, it took a while for her to trust that our dog was not going to harm her,” Edie says.

Isabela and the dog, Doobie, did eventually become good friends, and her cat story continues to be written.

“Isabela has definitely been a rags-to-riches story,” Edie says. “Not a day goes by that we aren’t grateful we brought her home. I do believe rescued animals are truly grateful that you took a chance with them and, in turn, show you their appreciation continuously.”

When asked why his parents went through the trouble of bringing Isabela home, Hunt says, “My parents realized that they couldn’t just leave this little gatita to face the perils of being a stray cat—and she still continues to brighten their days!”

Thanks to her rescuers, Isabela doesn’t have to live on the streets anymore, but she does still get to watch all the action from the comfort and safety of her new home. These days, Edie says, Isabela often can be found sitting on her screened-in porch—with a full stomach—watching the world go by.