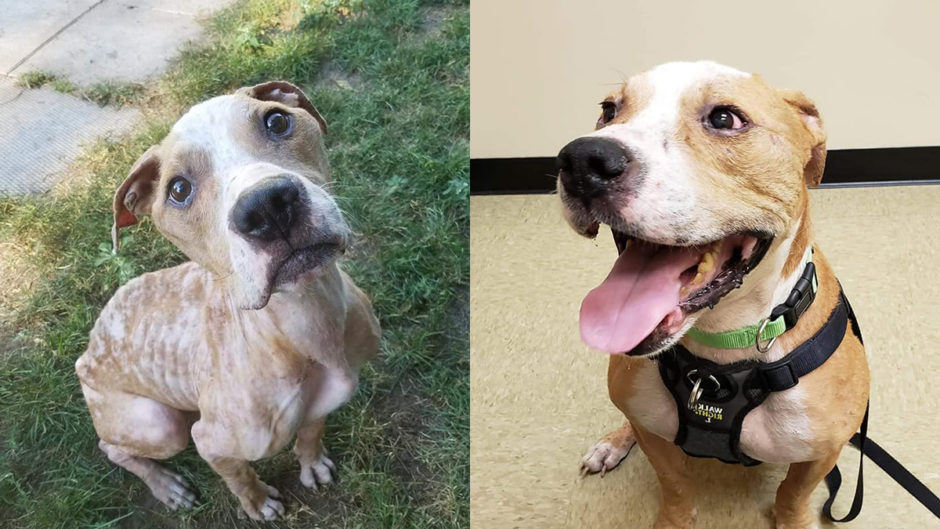 When Stephanie Beiser first set eyes on Fletcher, the dog was skin and bones.

The Bully mix had been wandering the streets of Bay City, Michigan, for weeks—lost, scared and hungry—before he was picked up by the Humane Society of Bay County (HSBC).

“[Fletcher’s] initial weight was 39 pounds, and a healthy weight for him was estimated at 65 pounds based on his approximate age and size,” says Beiser, HSBC’s foster coordinator. “He was rated a 1 out of 9 on a veterinary body mass scale, which is as extreme as emaciation gets.”

Thanks to the kindness of Beiser and others, Fletcher doesn’t look anything like he did those first few days at the humane society.

The Road Toward Healing

On July 9, 2018, a local pet store employee found Fletcher out on the street and noticed he was very scared and severely malnourished.

“She was able to coax him into her vehicle and called [HSBC] since it was after-hours and the local animal-control agency was closed for the day,” Beiser says. “One of our volunteers ran out and picked him up and brought him to me.”

When Fletcher—who was around 4 or 5 years old at the time—was first picked up, he was very fearful and flighty.

“We had to be very cautious with him, because it was obvious that he did not trust us and wanted to run,” Beiser says. “We were told that he had been spotted a few times over the prior couple of weeks running near the local hospital, and nobody had been able to get close to him.”

While Beiser says nobody knows exactly how Fletcher ended up in such poor condition, it was obviously an issue of long-term neglect.

“We received a tip after he came to us that his prior owner may have been jailed on an unrelated issue, and that the dog was likely turned out on the street during an eviction process on his home,” Beiser says.

After an uncomfortable first night, Fletcher was taken to Animal Alley Veterinary Hospital in Saginaw, Michigan, for an evaluation.

Blood work showed obvious signs of anemia and infection, and a skin cytology was positive for high numbers of bacteria, Beiser says. But Fletcher’s major issue was food, or lack thereof.

When the body has gone without regular nourishment for so long, it can be difficult to start digesting food properly again. Because of this, Fletcher was put on a strict diet schedule.

“He was initially started on five small meals per day so that his body could re-learn how to process regular meals, and even then we still had some issues with vomiting in the beginning,” Beiser explains. “It took us 5 or 6 weeks to get him regulated back to a normal twice-a-day feeding schedule.”

At the same time, Fletcher was receiving a treatment schedule of regular medicated baths, as well as oral antibiotics to treat his skin infections to help him heal.

“Because he had gone without regular food for so long, we had to do a bit of trial and error to find medications that were both appropriate for his issues and wouldn’t further upset his GI system,” Beiser adds.

Fletcher has come a long way since his days on the streets. His overall health has improved, and he weighs a much healthier 60 pounds. However, he continues to experience skin issues that Beiser says might take time to address properly.

“His skin has become a bit of a long-term battle,” she says. “We have done multiple skin scrapes and cultures, and the most recent one that was sent out to [Michigan State University] came back indicating a resistance to most antibiotics. He is now on a medication that we have to get through one of the local hospitals, as it is not currently produced for veterinary usage, as well as long-term steroid therapy.”

The rescue is looking into raising the funds for a dermatological specialist to see if they can figure out the root cause of Fletcher’s issues.

“We still do not know if it is possibly an allergic reaction to something or auto-immune related,” Beiser says.

While Fletcher still distrusts strangers and experiences anxiety in new situations, Beiser says he has become much more comfortable with his surroundings. And he has gotten along well with other polite dogs.

“He is, however, not a big fan of the snow that we’re getting right now!” Beiser says.

She hopes Fletcher can see a specialist soon.

“This gives us a bit of time to fundraise, as the testing is quite expensive,” Beiser says. “But with any luck, I’m hoping we can have the rest of his puzzle figured out by spring.”

For now, Fletcher has a loving home thanks to his foster mom, Beiser—who spoils him with lots of tennis balls and all the yummy food he might want.

“I anticipate that he will always need some form of treatment for allergy-related issues,” Beiser says, “but I’m positive that the perfect, proactive adopter will be out there for him once he’s ready.”