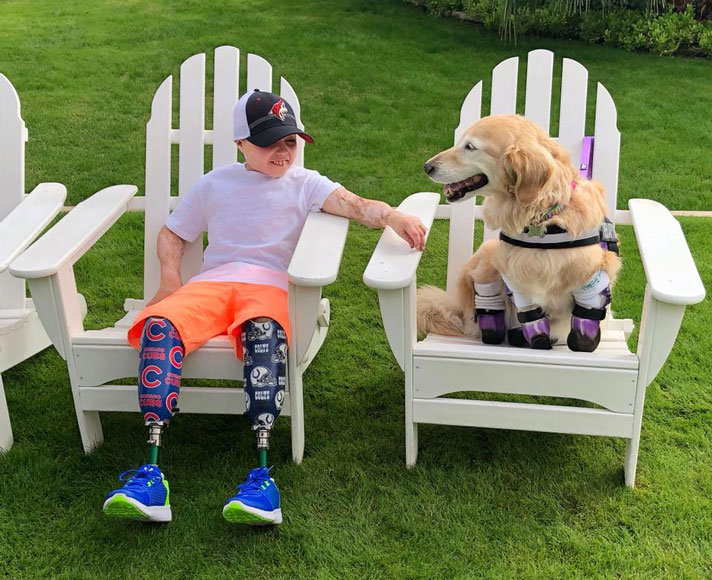 A double amputee boy had his wish come true when he got to meet a therapy dog who’s just like him.

Ten-year-old Owen Mahan, of Pittsboro, Indiana, lost both of his legs due to injuries he sustained after falling into a tub of scalding hot water when he was a toddler. He recently spent the weekend with a therapy dog named Chi Chi who also had to have her legs amputated.

Chi Chi is a 3-year-old Golden Retriever who was rescued from an area in South Korea known for raising dogs for the dog meat trade. Chi Chi was found in a trash bag with her legs bound and worn to the bone. Her legs were so badly infected and necrotized that her rescuers had no choice but to amputate.

In March 2016, a few months after her surgery, she was adopted by the Howell family in Phoenix, Arizona.

“I saw a video of her on social media shortly after her amputation surgery. She captured my heart and I couldn’t get her off my mind,” Elizabeth Howell told us. “Her eyes and sweet spirit captured my heart.”

Chi Chi was found in a trash bag with her legs bound in a South Korean neighborhood known for the dog meat trade. Via Chi Chi Rescue Dog?Facebook

Chi Chi, who wears custom prosthetics to help her get around, has gained a large following on social media. She recently became a therapy dog to inspire more people — people like Owen.

“She has a loving spirit and inspires people because of her resilience and determination,” Elizabeth said. “Once she forgave and learned to trust people again, we wanted to share her love with everyone possible.”

Owen became a fan of Chi Chi’s by watching her videos online. He finally got to meet her in person in November after a friend of his teacher’s reached out to the Howells. Generous donations from people all over the world helped send Owen to Phoenix, his mom, Susan Mahan, said.

Chi Chi and Owen spent the entire weekend playing together and snuggling. Chi Chi also watched on as Owen played a game of wheelchair basketball with members of the Australian paralympic wheelchair rugby team. The two hit it off immediately.

“They bonded very quickly,” Elizabeth said. “Chi Chi smelled Owen’s legs and seemed to recognize that they were similar. She was very loving and compassionate towards Owen all weekend.” Susan called it a meeting of “two kindred souls.”

Owen and Chi Chi do have a lot in common. For starters, they are both amputees. The burns Owen sustained from the scalding water did not result in the loss of his legs at first. He initially only had the upper portion of his feet removed, but as time went on, and Owen grew, they could longer support his body weight.

“He was in constant pain and had not been able to walk for a long time,” Susan told us. “The ortho surgeon told us the only way to alleviate the pain and for him to walk again was bilateral below knee amputation.”

Owen gets around with prosthetic legs. Via Ifowencanwecan/Facebook

When faced with the bleak news, Owen showed bravery well beyond his years.

“Owen’s response was ‘They don’t work. Cut them off,'” Susan said.

But the similarities don’t end there. Like Chi Chi, Owen was adopted. Susan first met Owen when he was 2 years old, not long after was nearly boiled alive, and she became his foster parent.

“Owen’s infectious laugh, his smile, his zest for life drew me to him,” she said. “Nothing stops him. He has a kindness for others unheard of in a child. He also has a wonderful sense of humor. He chose to take this horrible thing that happened to him and run with it.”

While some were writing his obituary, Susan said, Owen had other plans.

Owen always had a smile on his face despite his circumstances. Via Ifowencanwecan/Facebook

“Owen always has a smile on his face,” she told Pet Central. “Even before he came open for adoption, it was never a question of whether or not we would adopt him. He was mine! He had my heart from that first smile. I’m not sure what amazing thing I have done in this life to deserve to be his mom. I’m blessed he and God chose me.”

That indelible spirit is just one other thing he has in common with Chi Chi.

“They both show no matter how bad things are, you soldier forward with a smile,” Susan said. “They teach kindness, caring, compassion and giving. As they both give so much of themselves. They teach courage. In a world where we see so much evil, they have brought out GOOD.”

Their smiles are infectious. Via Chi Chi Rescue Dog/Facebook

Both Chi Chi and Owen have been through so much in this world, and yet they continue to thrive. They are an inspiration to us all.

“I believe bigger things were meant to happen from this,” Susan said. “And now are we seeing it. Lives were touched, hearts opened, and yes, we are seeing all the good still in this world.”