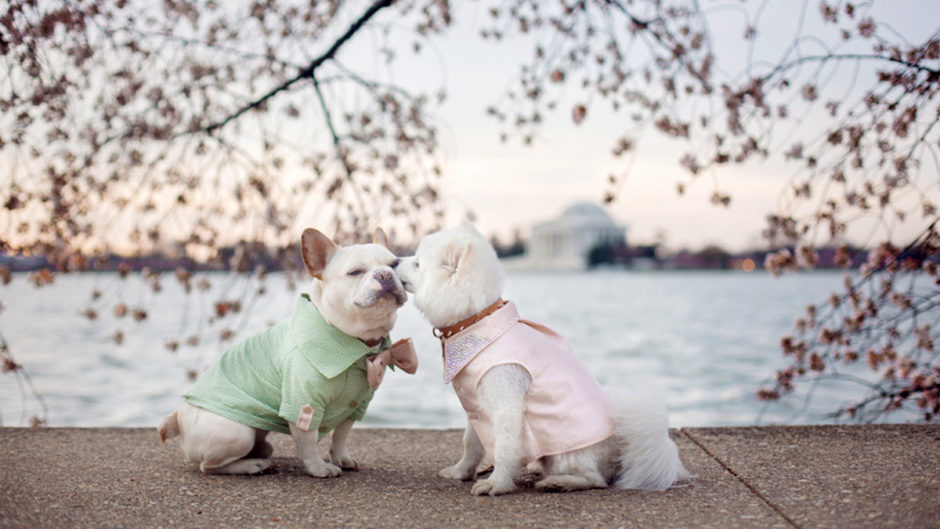 When it comes to Instagram, we all know who the real celebrities are: adorable and charming dogs.

When we say celebrities, we mean that these pets have ten—sometimes hundreds—of thousands of followers watching and liking whatever media populate on these pets’ pages. While there are accounts that exist solely for the fame (or money!), there are those that have a philanthropic agenda.

Dogs of Instagram like @sebastianlovesluna, @toastmeetsworld* and @manny_the_frenchie are utilizing their Insta-fame to raise awareness or funds for amazing animal welfare causes.

Whether it be a fancy fashion show, or an upcoming book deal, these famous dogs and their pet parents are finding innovative and fun ways to get their message across to their followers and beyond. See how these pups are making the most of their fame by giving back.

Sebastian, a French Bulldog, and Luna, a Pomeranian, live a picturesque life in the nation’s capital with their dog-loving pet parent, Emily Abril. Emily uses her background in portrait photography to capture her two beautiful pups enacting an envy-inducing and almost ethereal picture-perfect relationship.

“It just evolved into that love story,” says Emily. “It’s just so pure and innocent.” In real life, Emily says these Insta-famous dogs truly do act like an old married couple. “They are always chasing each other, napping together, licking each other’s faces. They’re definitely best friends.”

Emily says that when she first started posting pictures of her dog duo on Instagram, she didn’t know what she was doing at first, or have any idea how popular Instagram dog accounts could be. “It just slowly built,” she says. “I made a ton of friends on the account who I’ve also met in real life.”

Although she didn’t predict the fame that would come from the account, Emily’s original intention was to give back to the community. “I’ve always been that dog person,” she says. Her parents are originally from Peru, and while she was there, she would take dogs out of the shelter, wash them and take their picture in hopes of finding them a forever home.

When she adopted Luna, then Sebastian, “they were the only ones that enjoyed having their picture taken,” she says. “They were like my muses.”

When Emily isn’t capturing remarkable shots of her freshly famous dogs enjoying the city life, she is coordinating fundraisers to benefit animal care groups like the Human Rescue Alliance, an advocate group that tenaciously protects and advocates for animals in the DC area.

The most recent event they attended was the Fashion for Paws 11th Annual Runway Show benefiting the Human Rescue Alliance, where she needed to raise a minimum of $3,000 to participate. Emily successfully reached the fundraising goal, plus an extra grand by hosting various creative fundraisers that caught the attention of her Instagram followers. It wasn’t her first time at the fashion show—it is her third year participating. In total, Emily has raised over $10,000 for the event.

Emily also loves fashion—and even designed Sebastian and Luna’s runway clothes herself. And Emily designs their everyday outfits, too. “I couldn’t find anything I liked, so I make all their clothes,” she said. Her favorite style to design is athleisure for pets, and she hopes one day to start selling her pet clothes.

Besides raising money for charity, Emily hopes to inspire people with the love she has for her pets, and the relationship that her two pups share with each other. “There is so much going on in the world, and if someone can use this account as an outlet for their happiness, then that makes my day.”

Toast was adopted from a puppy mill in North Carolina in 2010 by positive body blogger Katie Sturino, who considers animal welfare to be a cause that she holds close to her heart. When she saw Toast, she instantly fell in love with her signature tongue and beautiful ruby red coloring. Beyond just physical appearances, Katie admired the peaceful nature of this now famous dog’s personality.

Katie comes from an extensive background in PR and social media marketing, and knew Toast had the “it” factor that could easily make her an Instagram dog celebrity. She started dressing Toast up in funny costumes and chic outfits and posted them to her new account.

Since Toast’s adoption and Internet fame, she has been featured in many notable publications such as InStyle, Lucky and Architectural Digest. She has modeled for Karen Walker’s eyewear campaign and even made an appearance on Good Morning America to promote her new book, Toast Hampton. To give back to the community, a portion of the sales go directly to puppy mill awareness.

The intention always was to use the Instagram dog account as a platform to increase awareness for puppy mill rescues. Since Toast comes from humble beginnings herself, philanthropy plays a huge role in the Instagram account. One of their biggest fundraisers for puppy mill awareness was her wedding to Finn Hearst, which benefited Friends of Finn, a committee dedicated to putting an end to the inhumane treatment of dogs in puppy mills and to advocate for pet adoption. The wedding had tons of publicity, and was even featured on The Real Housewives of New York City.

*Toast has since past following publication. We celebrate his life in loving memory.

Manny, a French Bulldog, can easily be considered Chicago’s most famous dog. This celebrated canine has a cool following of 1 million and even sports his own 501c3 nonprofit called the Manny and Friends Foundation. “It’s so crazy how Manny gained such a following,” says Manny’s pet parent, Amber Chavez. “We honestly don’t know how it happened. We never tried to ‘get him famous’; we simply got obsessed with posting his photos.”

Amber started Manny’s dog Instagram when he was about 2 years old. “We just had a ton of photos of him … and thought it would be funny to host them there and make it seem like he posted them himself.” After some modest traction, the account finally took off. Amber attributes the sudden surge of followers to the introduction of Instagram’s video function. “The videos of him in the sink or ‘talking’ are always very popular,” she says.

“We have always loved to give back, and of course are dog lovers. There are so many humans and animals in need, and when we realized we had this amazing platform, we wanted to help as many as possible,” Amber says. Manny’s first major business deal and fundraiser was a co-branded T-shirt, which benefited an animal rescue. “Since then, we have continued our philanthropy efforts, and Manny, the philanthro-PUP extraordinaire, has been able to help raise funds for some great causes,” she says.

Manny has also donated to several national and local animal rescues. Amber and Manny have a close relationship with the Chicago French Bulldog Rescue, and that’s where Amber adopted Manny’s siblings, Filip and Liam. “We have a soft spot for flat-faced friends,” she says.

“We love to team up with different charities and find creative ways to donate,” Amber says. Manny has a charity tour where he visits different U.S. cities to meet fans and raise money for local charities. He also has his own website where you can buy some Manny merchandise. That’s not to mention the book Manny has coming out in June: Manny the Frenchie’s Art of Happiness. As always, a portion of the proceeds go directly to charity.

“We hope to continue on this awesome road of fun and giving back,” says Amber. “We love sharing with his fans and being able to brighten someone’s day. Manny is always getting new and exciting opportunities—we can’t wait to see where it takes him.”