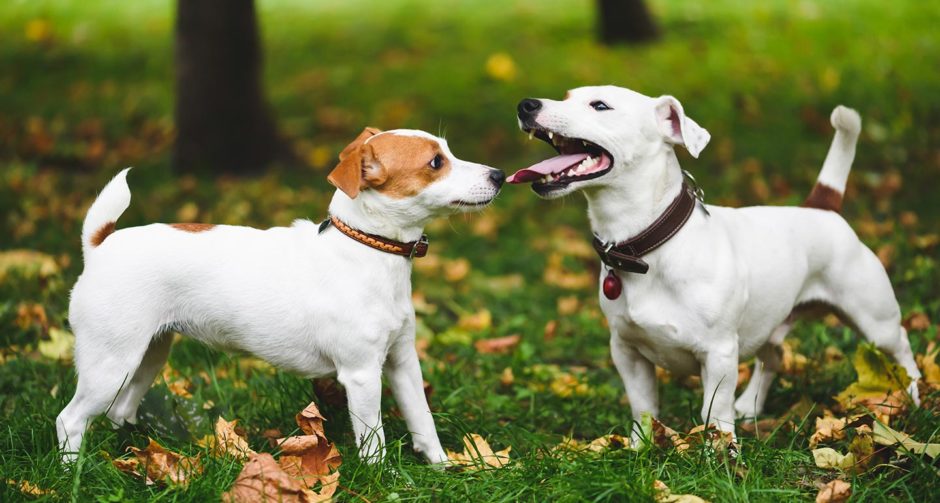 Q:My precious pup Jackson is usually a sweetheart, so I thought he’d love having a friend to play with while I’m at work. Uh, nope. When I brought a new puppy home, he acted really aggressive. Is this normal—and is there anything I can do to help him welcome our new dog into his life?

What a stressful situation! I’m sorry to hear that Jackson isn’t a fan of your new addition. But you’re not alone—bringing home a second dog can be challenging for even the most accepting pups. Our dogs crave predictability, so the lifestyle shift that happens with a new sibling can make for a bumpy transition. Plus, many adult dogs don’t appreciate nonstop puppy exuberance, which can make this getting-to-know-you period especially tricky.

Here's a guide to introducing new dogs to each other. Though yours have already met, following these steps should help smooth things over, too.

How to Introduce Dogs: Steps for a Successful Transition into the Family

The best way to ensure a smooth greeting is to plan ahead and take your time. Rushing the greeting or forcing either dog to interact if they’re feeling uncomfortable can derail the process. Even though it’s tempting to bring a new pup into your home and hope that it all works out, the best place for dogs to meet is on neutral ground in a fenced area.

Start the interaction with both dogs being walked on leash by two competent dog handlers, AKA adults who are strong enough to hold onto the leashes and know the basics of canine body language. (Read up on what your dog’s body language is telling you, and you’ll be good to go!) If a safe outdoor space isn’t available, use a large garage or basement with a freestanding divider, like the Primetime Petz 360 Configurable Gate.

Begin the interaction with the dogs on either side of the fence so that they can see and sniff one another. Watch each dog carefully. Are they showing signs of fear, like their hair standing on end or freezing in place? Or are they relaxed and curious, with open mouths and low, wagging tails? Once both handlers are confident that the body language between the dogs looks happy and interested, bring both dogs inside the fenced area—but don’t let them loose just yet.

First, keep the dogs about 10 to 15 feet apart, and walk across the space parallel to one another. Again, pay attention to their body language. If both dogs are showing relaxed social behaviors, gradually reduce the distance between them until they’re walking beside one another. Both dogs should have loose, waggy postures throughout the process, and if things are going well you might see a few play bows—you know, the “bum in the air, elbows on the ground” stance that’s an invitation to play.

Focused, hard stares; slow, tense movements; or freezing in place are warning signs that things might be moving too quickly. If you’re concerned about the body language you’re seeing during the introductory stages, consider increasing the distance between the dogs and slowing down the greeting process. Remember: It’s better to move too slowly than too fast.

If the dogs seem ready to meet after parallel walking, drop the leashes and allow them to interact until you’ve established that both dogs are getting along outside.

Now it’s time to test the dogs’ relationship back at home. The first step is bringing your puppy inside your house, without Jackson. But before you do, make sure that all of your resident dog’s favorite resources like toys and bones are put away to prevent resource guarding issues. Jackson’s already learning to share his space, after all—he shouldn’t have to share his toys, too! (At least not right away.)

Once Jackson’s goodies are hidden away, give your puppy a few minutes to explore his surroundings. Then, welcome your resident dog back into the house. Always supervise the pair as they learn to live together, and always separate them when you’re not around to watch them, especially if there’s a size difference between the dogs or your resident dog is a senior. Since you’re dealing with a puppy, you should use a crate to keep him safe when you’re not able to watch him. Once your puppy has graduated to being able to roam freely in your house when you’re not around, you can begin to leave both dogs unsupervised together.

Remember, most puppies don’t understand the rules of engagement with adult dogs. Their behavior can be, well, annoying! (No offense to your new furry pal, of course.)

Many pups try to interact by jumping up, nipping and barking. Well-socialized adult dogs will usually tolerate the youthful mischievousness—up to a point. When it gets to be too much, the older dog might correct the pushy behavior by growling or quickly pinning the puppy. You mentioned that your resident dog was “aggressive” with the puppy, but keep in mind that a brief correction to instruct a puppy about what is and isn’t acceptable in dog-language is a necessary part of the socialization process. However, if the resident dog continues to penalize the puppy even after they’ve backed off, or corrects the puppy for minor infractions like an accidental jostle, consider reaching out to a qualified trainer for support.

It’s easy to focus all of your attention on the new addition. Hey, between between potty training and chew training, puppies are high maintenance! But Jackson also needs stability as he transitions to accepting a new sibling. Try to keep his schedule the same, which means honoring your usual walks and playtimes. Give him time away from the new puppy, either by crating the pup or letting Jackson rest by himself in a space that the puppy can’t access. A baby gate like a Carlson Freestanding Pet Gate is a great option because it can be quickly relocated depending on your needs. Even if your sibling dogs fall in love right away, it’s still important to spend solo time with your original dog during the transition.

My hope is that once Jackson has a chance to get to know his new sibling, his initial unhappiness will shift to tolerance, and in time will bloom into a lifelong friendship. Good luck!

By: Victoria Schade
Victoria Schade has been a dog trainer and writer for over 17 years. Her dog duties have included working on Animal Planet’s Puppy Bowl as the lead animal wrangler, appearing on two seasons of the Animal Planet show "Faithful Friends," creating dog training content and appearing in videos for a variety of sources, and writing two dog training books, "Bonding With Your Dog" and "Secrets of a Dog Trainer."

You can keep up with Victoria, Millie, the Smooth Brussels Griffon and Olive, the mixed breed dog, on her blog www.VictoriaSchade.com, on Twitter or on Instagram.